After a certain point in a battle, we can grow weary of constantly comparing attack rolls to the monster's defenses. At this point anyone who was paying attention would likely know the defenses of the monster anyway. Today we're going to discuss a table aid that serves multiple purposes, the Monster Knowledge Card.

This 5x8 card folded in half and placed as a tent card gives the monster's name and defense scores. The purpose of this card is to reduce the amount of back-and-fourth between a player and a DM when determining a hit. Normally this goes back and fourth about three times until the action is resolved. With this card, it can be reduced down to a single interaction - the amount of damage done to the monster. 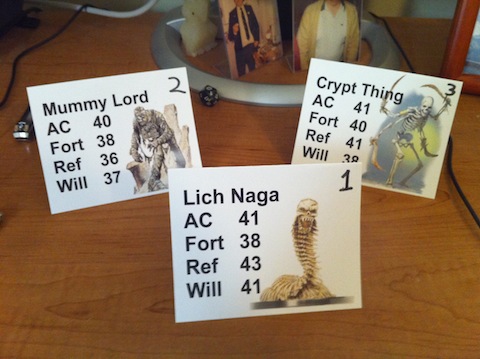 Advantages of a Monster Knowledge Card

There are a few advantages to using cards like this. First, as mentioned, they reduce the amount of back and fourth between a DM and a player. On a player's turn, the player can simply roll the dice and check to see if he or she it rather than asking the DM all the time. If you're running a game with a lot of players and tend to let players roll off of their turns, these players can have everything ready for you by the time you get back to them. Instead of them waiting to see if they hit, they can apply all the damage and just tell you the amount.

Second, it normalizes the names used at the table for various monsters. When a card clearly states the name of the monster, you won't get "the frog-head dude" when what you're looking for is "The Hezrou demon" or my personal favorite "that guy". Now people will call things by the name on the card.

It also helps tie people closer to the image of the monster. By using some nice artwork from the WOTC art galleries, you can add some nice flavorful pictures to the cards. This will help immerse your player in the battle a little bit more. 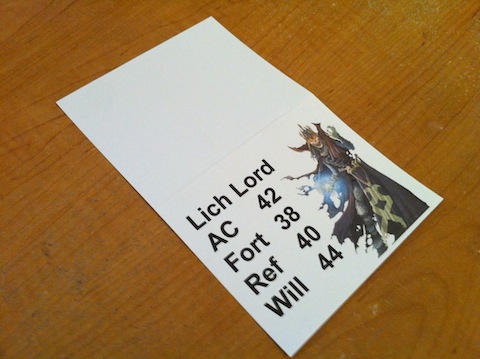 Using your word processor of choice, format a 5x8 page with 1/4 margins. Add enough carriage returns to move your first line of text below the half-way point on the card. In large bold text in a very readable font like Helvetica, type the name of the creature, the number of that creature in your initiative order, the four defense scores, and add a picture of the creature. Print them out, fold them in half, and you're done!

When to play the card

There are two times when you might drop this card on the table. The first would be early on when a character performs a successful monster knowledge check. Depending on how easily you want these cards to come into play, you might choose a DC of 15 at heroic, 20 at paragon, and 25 at epic. A more moderate check would add five to this for 20, 25, and 30. Better yet, determine the skill required using the standard easy, medium, and hard DCs using your judgement to determine how easily a PC might identify a creature. When the monster knowledge check succeeds, drop the tent card on the table.

The second time to play this card is when the characters have performed enough attacks to know what the monster's defenses are. You would probably reach this point about halfway through a fight. When the time feels right to you, throw the cards out on the table. You'll know when that time is right when you generally don't care if the players know the monster's defenses or not. For me, this is usually when a battle is beginning to feel long to me.

Giving too much away?

The common complaint about a system like this is that you're giving too much information away. I agree with this up to a point. There comes a point in a battle where pulling back the veil on the mechanics a little bit helps more than it hurts. The mystery of a battle is important in the first few rounds but later on all it does is increase the amount of required communication. The players are already thinking mechanically, now they're just getting one extra element of data.

Think of it like the "scan" spell from Final Fantasy and it begins to feel not only like it does little harm but it adds quite a bit of fun to the game as well. Give it a try and see how you like it.