We're back for another episode of Monster Optimization where we twist the screws a little harder and send those fancy pants Monks and Seekers back to their safe little points of light. Today we're going to go deep into the underdark for a level 15 encounter best applied to a group around level 12 to 13. As always, this is designed to be a difficult encounter to push a group hard so keep this in mind. 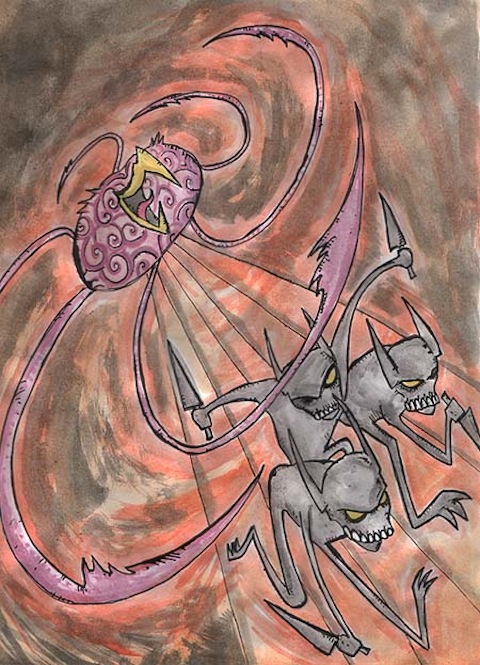 (Artwork courtesy of the awesome @JaredvonHindman of Head Injury Theater, used with permission.)

Today our monsters of choice are the Grell Philosopher (MM page 144) and the Quickling Zephyr (MM page 215). The key to this optimization is the Grell Philosopher's Lightning Lance which blinds and the Psychic Storm which creates a 5x5 square burst zone that lasts until the end of the encounter and dazes any who enter or end within it. These effects are stacked with the Quickling Zephyr's Combat Advantage that grants 2d6 extra damage and dazes the target (save ends).

Like we've talked about in other optimization articles, you're best off with two of the Grells, instead of just one. One Grell alone is a lightning rod for your party's wrath. It will suck down every high-damage attack and every nasty status effect your party can muster. Two of these, on the other hand, spread out your party's attention and ensure the lethality of the Grell can be inflicted before it dies. Even though the Grell is an elite, it will still drop fast for a paragon-level party. So stick to two Grells.

We're going to stick four of the Zephyrs in this encounter. With four Zephyrs its easier to flank a target in the rare case where there's no blinded or dazed targets. They're also a little low on hit points which will help with pacing but requires more zephyrs to ensure they get to stick some blades into your tasty PCs.

To protect our precious Grells, we're going to add some Spore Fields from the book Underdark on page 109. Any creature that enters or ends its turn in these spore fields take ongoing 10 damage and is restrained (save ends). This effect is actually probably too nasty as written. People who enter these areas are highly unlikely to ever break out so you probably want to have it only restrain when they enter (save ends) so they can escape next turn if they save at the end of the turn they entered.

If you want to really turn on the screws in this encounter, have the Grells and Quicklings immune to the effects of the Psychic Storm and Spore Fields. This is a little bit of a cheat but it is plausible since this is their lair.

Restrained PCs have the advantage of granting combat advantage to our wonderful Quickling Zephyrs so they once again take 2d6 extra damage and are dazed, save ends.

Use the Spore Fields to surround your Grells, perhaps surrounding a pair of raised platforms carved out of stalagtites or petrified mushrooms or something. The Grells should begin by pounding on ranged attackers with their blinding Lightning Lance attacks. The Quicklings should attempt to stay hidden until the battle begins to play out with their +21 stealth skills.

When the battlefield begins to settle, the Grells should drop their Psychic Storms on any group of ranged strikers or defenders. The patches of spore fields should help defend the Grells from heavy hitting defenders. Have the Grells use their action points to attempt to blind anyone who threatens them with a Lightning Lance. The Zephyrs should begin to attack as soon as they see targets that grant them combat advantage, accepting OAs if need be. They should always strike first at blinded, dazed, or restrained targets.

You'll want to be careful in this battle for a few reasons. One, two highly defended elites, like the Grells surrounded by Spore Fields, can end up being grindy. Consider having them either surrender or flee when the battle turns against them. Also, be sure not to gang up too much on any single player with all of the dazes, blinds, and restrains. They will quickly become frustrated. Remember to change up your pacing to keep your players interested and don't be afraid to kill off a monster early if you think the battle is getting boring.

Hopefully you'll end up with a difficult yet interesting encounter that will show your paragon-tier PCs that the world of shadow and darkness hasn't yet rolled over for them yet.