There's few creatures as iconic in Dungeons and Dragons as the Beholder. A ball of intellect and destruction, beholders should always bring terror to those who find themselves facing one. A party that faces a beholder should feel that fear and, even when victorious they should remember the dangers they faced and hope to never face it again. 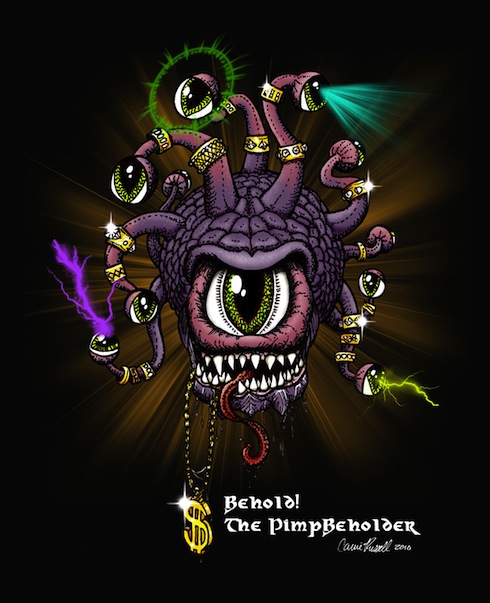 As written, however, the 4th Edition beholder simply doesn't hold that fear. The threat of their eye-rays is little more than any standard attack from any creature and, as a solo, they are very easy to pin down and control. Today we're going to fix this problem.

Today we're going to look at how to bring the danger back into the 4th Edition beholder.

Solo creatures, in general, are too easy to control in a 4th edition game. Since they count as five creatures, any single effect on a solo is as effective as that same effect landing on five individual monsters. We need to reduce this effectiveness in two ways. Standard save-ends effects aren't much to worry about with a beholder. With +5 to saving throws they have little problem saving from most effects.

Two effects can drastically reduce a beholder's effectiveness: daze and stun. I've written before about how to reduce the effectiveness of these status effects and we'll use those same techniques now. We do this by giving a beholder a new resistance called Antihero:

This reduces the effectiveness of Dazes and Stuns without removing their use entirely. Players will still be happy to use it even if it doesn't fully pin-down the beholder.

The second most effective way to control a beholder is by marking it. Defender marks can be devastating for a beholder who often includes an aura that fires one or more eye-rays at any target beginning within 5 squares. When marked, it could be argued that this aura would trigger the mark. For effects such as Hospitaler's Blessing, this removes nearly all the damage inflicted by an eye-ray. Over the course of a battle, a party might find themselves better off after having defeated the beholder than they did when they began. This should never be the case.

We can reduce this effectiveness easily enough by adding the following line to the beholder's aura:

"This does not count as an attack when considering marks"

Now the beholder's aura is free to hit anyone who starts within 5 without worrying about triggering a defender's mark. Marking, however, is still effective in reducing the beholder's ability to use its other attacks during its turn.

So now we've reduced the PC's ability to control a beholder's behavior. Time to sharpen it's teeth.

There are a lot of beholder variants in 4th edition and increasing the threat of any one beholder will require special attention to the specific beholder we have in mind. In general, we want to remove any prerequisites from the effects of the beholder's eye rays. For example, the Death Tyrant's Death Ray power normally requires the target to be bloodied. In paragon and epic tier, it is going to be really hard to keep a PC bloodied for any length of time. Better is to have the death ray work against anyone.

The second thing we want to do is increase the damage the beholder inflicts. We do this by adding another power:

The beholder gains +10 damage to all attacks.

Now the beholder has a straight up bonus to damage that is sure to get the players' attention.

Finally, we'll want to take a look at the central eye - once bane to any magic user but now reduced to essentially the same power as many other creatures the PCs might face. We do this by replacing the beholder's central eye power with this one:

Anti-magic Eye(minor action; at will; 1/turn)

Close Blast 5; level+6 vs Will; The target loses any resistances and takes -2 to attacks and defenses until the end of the beholder's next turn.

Now the beholder's eye-rays are a lot more likely to inflict heavy damage upon his foes without any declarations that "yeah, I have 15 fire resist so I take 4 damage - woo, scary". Making this an end-of-next-turn effect fits the idea that the beholder must affix its central eye to the same group to draw the magical energy from their items.

Now that we've reduced the PC's ability to control the beholder and increased the beholder's danger, it's time to look at the ideal beholder environment.

Beholders have two abilities that help us pick the ideal lair. First, it can fly. Second, many beholders have ways to push, pull, or slide their targets.

This means pits, and lots of them. Perhaps the battleground itself is made up of platforms suspended over a large drop. You don't want the drop to be too nasty, maybe 20 to 40 feet for 2d10 to 4d10 on the fall. A 20 foot drop (2d10 damage) with some poisoned spikes at the bottom (for another d8 per tier + ongoing 5 poison per tier) would make for a nasty fall but still let players climb up out of it on their turn.

Any battleground you set up for your beholder should be relatively small. A 12 by 12 would be small enough that nearly everyone will be subject to the beholder's eyestalk aura.

And what about a posse? Every good beholder needs some backup. Pay special attention to brutes. For the undead beholders, ghouls are always a good choice.

With these modifications, we finally have a beholder to be feared by all of those who might face it. Let's look at a final full statblock for a modified Eye Tyrant we'll call the Runescribed Beholder Eye Tyrant: 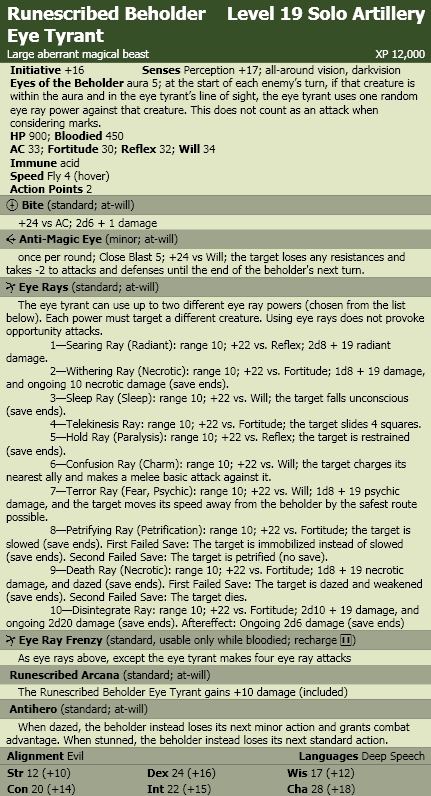 Like the artwork? Support @Anachr0nista and buy the shirt!