Few monsters invoke such emotional responses from old-school D&D gamers like the Tarrasque. A beast of wanton destruction, a destroyer of worlds, and unique among the cosmos; the Tarrasque should be a threat to any creature, mortal or not, that dares to stand in its path.

Unfortunately, as written, the Tarrasque in the Monster Manual 1 is no threat to a group of epic-level adventurers. No status effect protection, a poor number of actions per round, low damage, and few interesting effects make the original Tarrasque little more than a simple brute with a lot of hit points.

Today we're going to re-engineer the Tarrasque into the beast of old, the beast it wants so very much to be. Let's begin.

I've written about it often, but all solo monsters need some form of protection from debilitating status effects. There are a lot of crafty ways to do this that don't completely eliminate the use of status effects but still help ensure a solo monster keeps up a threat even while under these effects. With the Tarrasque, we're going to be more brutal about it. Simple immunities fit his highly defensible stature. The pure fury of the Tarrasque makes it immune to stun, daze, immobilize, prone, restrained, sleep, unconscious, dominate, forced movement, and any other debilitating mental attack. It's simply a fortress both mentally and physically and these attacks simply don't affect him like you'd think.

You'll want your group to learn this early on with a perception, history, dungeoneering, or insight check so they don't waste powerful dailies learning that he can't be stunned. You also want to avoid doing this sort of thing very often. It works well for the Tarrasque but adding these immunities to other creatures will just end up pissing off your players. 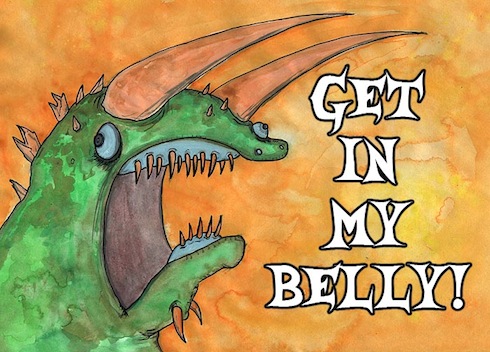 An arsenal of powerful attacks

Like all monsters before the Monster Manual 3, we're going to up the Tarrasque's damage using the June update including a 25% increase for it being a brute. This takes its main attacks up to 4d8+29 damage, quite a bit more than the impotent 1d12+16 it originally had. Fitting more in line with the original 1st edition version, we're going to give him a vorpal bite that critically hits on 18,19, and 20 for max dice damage (61) and an extra 6d12 (6d12+61 damage on a crit). That should get your group's attention. We'll also keep the 15 ongoing damage from his bite attack.

We're going to dump the "Fury of the Tarrasque" and replace it with a swallow whole attack. This lets him separate the party into those swallowed and those not. Doing enough internal damage to him makes him vomit forth those he swallowed.

We'll also add in a tail sweep minor attack that lets him push 4 and knock prone. Handy against pesky defenders.

We'll keep the resist 10 to all damage the original Tarrasque has. Even with 1420 hit points, a high level epic group will dish out an amazing amount of damage so we don't need to worry about it.

More interesting is the original reflective power the 1st edition Tarrasque had. We're going to add that back in now. Our pimped Tarrasque will have a reflective armor immediate interrupt that lets him redirect a ranged attack against another enemy. This way a single target spell or power can be reflected once per turn against another member of the party. Very nasty. You'll want to be careful not to do this over and over against the same character's attacks or they will feel completely worthless. Instead, use it occasionally to get their attention and avoid some nastier attacks.

Making it cooler when it's bloodied

To keep the Tarrasque from being too boring, we'll give it some really powerful attacks when it's bloodied.

First, we're going to keep the Frenzy that lets him perform a bite attack against any target within reach when bloodied. This way it can inflict that vorpal bite against a whole bunch of folks.

Second, we're going to give it something I call the doughnut aura. The doughnut aura affects all squares outside of a certain range from the originating square. In this case, any creature outside of 4 squares from the Tarrasque is struck by shockwaves emanating from the terrible beast. Any creature more than 4 squares from the Tarrasque takes 30 damage at the beginning of its turn from this terrible shockwave. It's a little contrived, but it serves a great purpose in threatening ranged attackers and giving players a choice to either risk the vorpal bite or take an automatic 30 damage every round.

A 1st edition nasty beast for a 4th edition party

Life is simply too easy for high-level 4th edition PCs. With the Tarrasque we built above, we're sure to add back in that original threat felt from the 1st edition version. While some of the above techniques should be used carefully, when used correctly your group should have a fun battle and surely remember the creature they fought.

Resist 10 to all damage.

aura 40; any flying creature in the aura has its fly speed reduced to 1 and maximum altitude reduced to 20 feet (putting it within the tarrasques reach). Any creature above this altitude at the end of its turn falls to an altitude of 20 feet automatically.

When the Tarrasque is bloodied, any creature outside of the Tarrasque's reach takes 30 damage at the beginning of its turn.

The Tarrasque attacks each creature within reach with a Vorpal Bite.

Interrupt when attacked with a ranged attack. The Tarrasque reflects the attack to another target within 20.

Reaction when attacked with a melee attack. +33 vs Fortitude; 3d10+21 damage and the target is knocked prone.