The pandemic of 2020 / 2021 taught many of us the value of playing D&D online. Even as we crawl out of our holes into the bright shining light of the world once more, many of us still find great value in playing D&D online. It is ever important that, whether we do so in person or online, we connect and spend time with family and friends and there's no better way to do that than playing D&D. Playing D&D is important.

While there are many ways to play D&D online, today we'll focus on one single path: playing D&D over Discord.

If you prefer a video, here's my Youtube video on playing D&D on Discord.

Here's a quick checklist for getting Discord server set up to play D&D with D&D Beyond:

With so many solutions out there, why choose Discord as our platform for playing D&D online? Here are a few reasons:

This article isn't intended to convince you to use a different stack of software than you already use to play D&D. All that matters is that you're playing D&D, whatever tools you use. Don't take this article as a slight on other solutions. If you love Roll 20, Fantasy Grounds, Foundry or other VTTs; go with the Gods.

I'm focusing on Discord not to convince anyone to switch from another system but to help those who seek what I've found to be the easiest way to play D&D online. 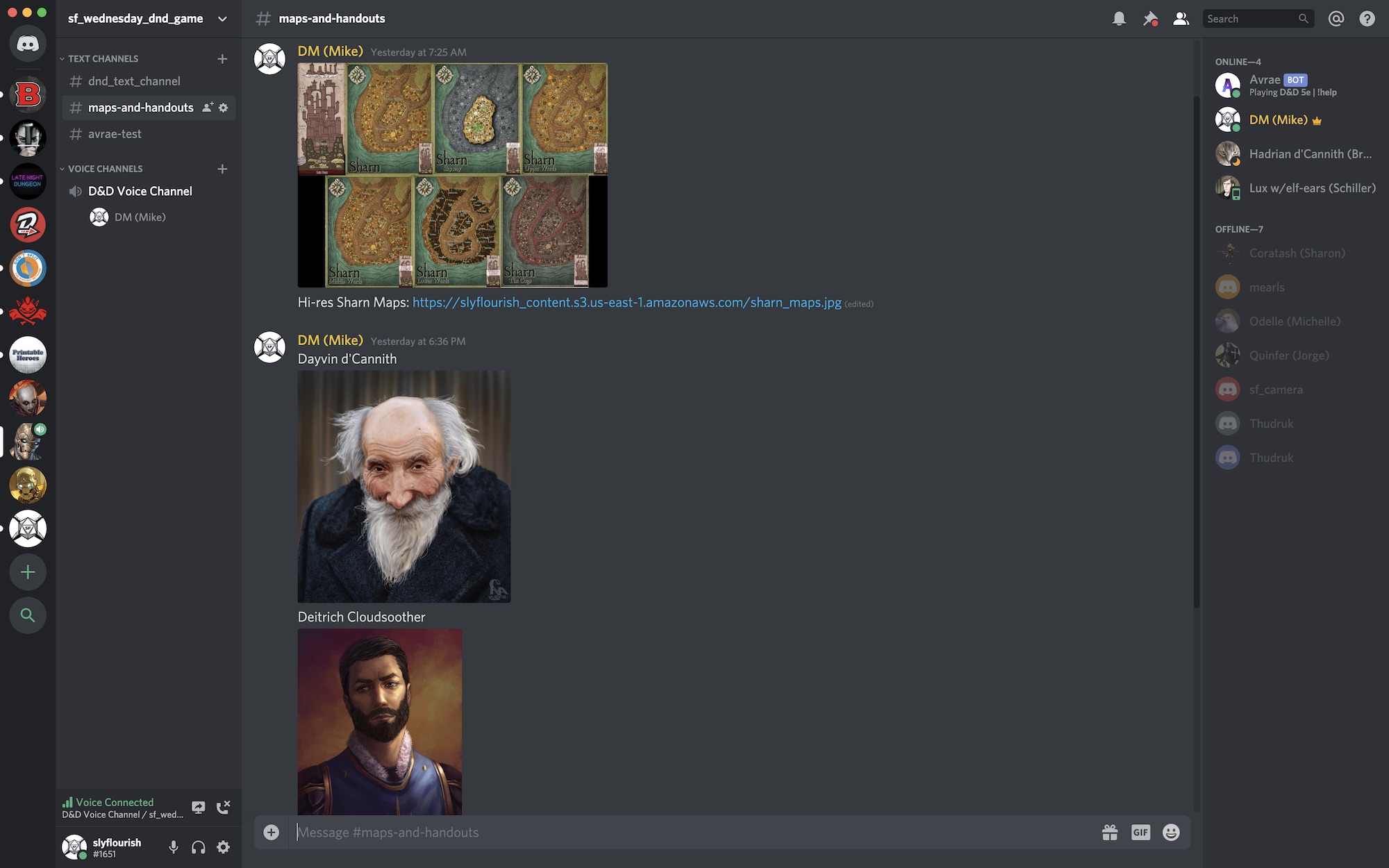 Sharing Visuals in a "Maps and Handouts" Text Channel

While much of our D&D game can happen over voice chat, we can also drop images into Discord for pictures of NPCs, locations, handouts, maps, and parts of maps. You can add an image to the chat channel by dragging and dropping it into the channel, pasting from your clipboard, or uploading it directly by clicking the + button near the chat box. I recommend setting up a "maps and handouts" text channel on your D&D Discord server and then locking down write permissions to just the DM so only you can add new images to it but your players can see it. 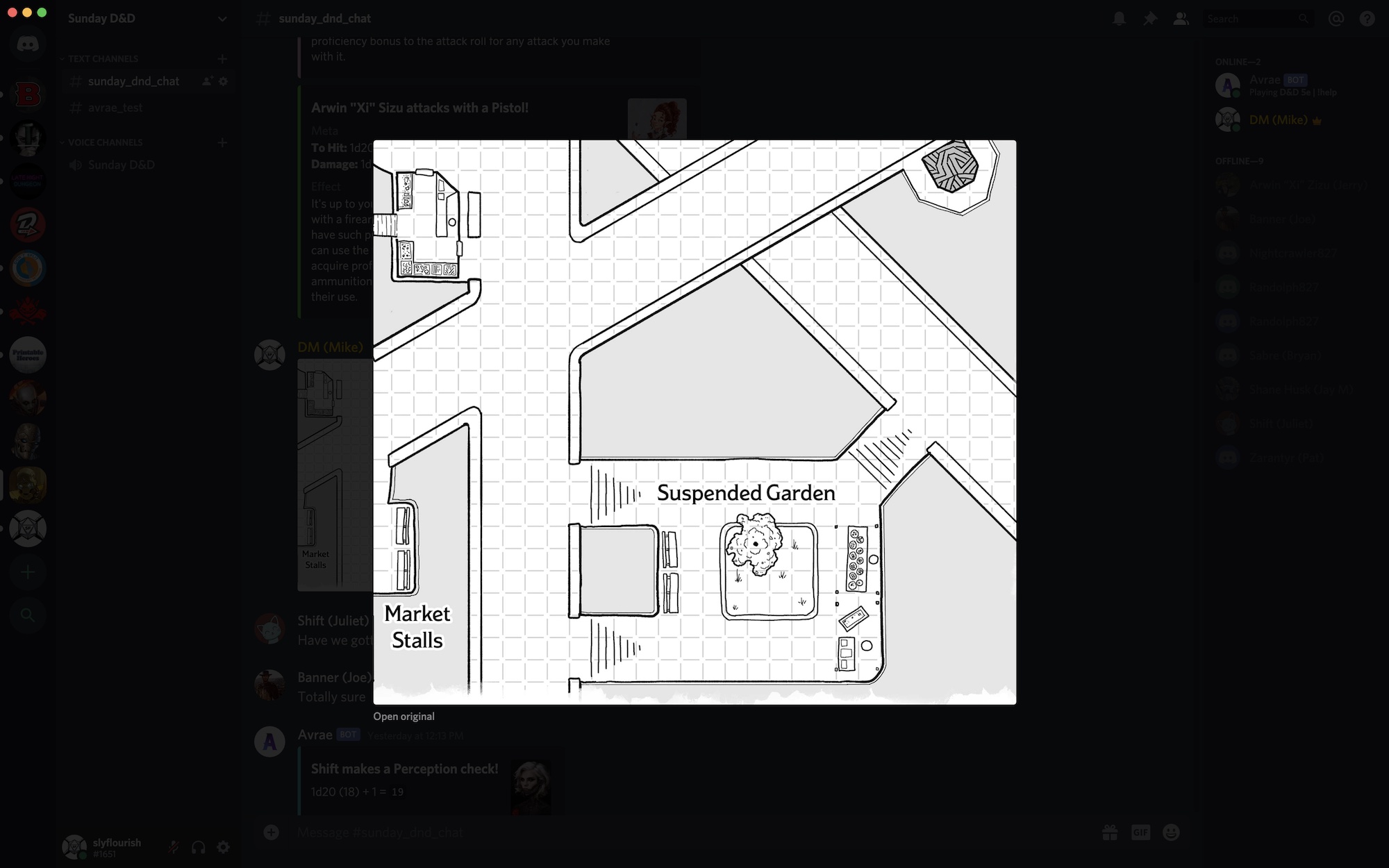 Running Augmented Theater of the Mind with Screenshot Maps

I'm a big fan of theater of the mind combat and this style of combat shows great value when running D&D online. Programs like Roll20 let you run tactical grid-based combat online but have a high learning curve and require full PCs or laptops for all participants.

Instead of running tactical combat, you can run a form of augmented theater of the mind by uploading screenshots of pieces of maps or pieces of maps into the "maps and handouts" channel so players can see the combat location and then ask players to describe where they are and what they're doing. Seeing a map is often a big help for players even if you don't display tokens for characters or monsters. Knowing generally what an area looks like is often enough.

This works equally well for exploring dungeons. You can take a full dungeon map (I personally love the maps over at Dysonlogos), screen capture and crop the relevant sections, and upload them to Discord as the characters explore the dungeon. A lasso-style copy and paste tool lets you clip out exactly the right portion of a map to show the players. Windows has this natively by pressing Win, Shift, and S all at the same time. The Mac has third-party applications such as Screenshot Maker that lets you use a lasso to copy a part of an image as well.

D&D Beyond now lets players with characters in the same campaign share their dice rolls in a "campaign log". As a DM, you can build encounters tied to those campaigns as well and share the dice rolls of monsters in the same log. This is a great way to share dice rolls within a group and requires no extra settings in Discord.

Frankly, its easier to keep dice rolls to the campaign log in D&D Beyond and just use Discord for text chat at this point. This requires no bots or plug-ins.

Running Initiative Through D&D Beyond

The D&D Beyond Encounter Builder now lets you add initiative results and run a battle directly from D&D Beyond. Players can roll either with the in-app dice roller or their own dice. You add their results to the initiative tracker in the encounter builder, and you're off to the races. You can roll monster attacks and damage right from the encounter page and either keep it private or pass it through to the campaign long which, in turn, passes it through Avrae to Discord.

Avrae has one feature I find tremendously useful on the DM's side: rolling initiative for the whole group at once. As the DM you can set up an alias in Avrae to roll initiative automatically for all characters and a default monster with a single command. This trick doesn't use or require integrated characters from D&D Beyond. Instead you set up a single alias that rolls initiative for all of the characters and a default monster at once. When you're in Discord on a server that has Avrae set up, modify the following text for each of the characters in your game and paste the whole thing in at once into the Discord chat channel:

After that it's "!init next" or the shortcut "!i n" to go from turn to turn. The Discord channel keeps the initiative in a pinned message for the channel to show people what the initiative list is whenever they want to look it up. Once combat is done, type "!init end" and confirm that combat is over.

If your players are happy to let the system roll initiative, this is faster than just about any other method of rolling initiative.

This article focuses on playing D&D over Discord because I found it to be a popular, free, simple, and powerful way to play D&D online. Choose whatever system you wish to help you play D&D online. If you're having trouble finding the right system and method to play D&D online or don't know where to start, hopefully this article helps you find an option with Discord. Most important is that we continue to play D&D with our friends and family. It's never been more important than it is right now.