Running adventures for organized play is quite different than running games for your home group. Some of these differences are very clear like the fact that you'll likely be running a game for people you don't know. Other parts of it, however, are more subtle and require taking a different approach to how we might typically prepare. Preparing for an organized play game is often not compatible with the ways of the lazy dungeon master. We have to pay particular attention to areas we might hand-wave in our home games. 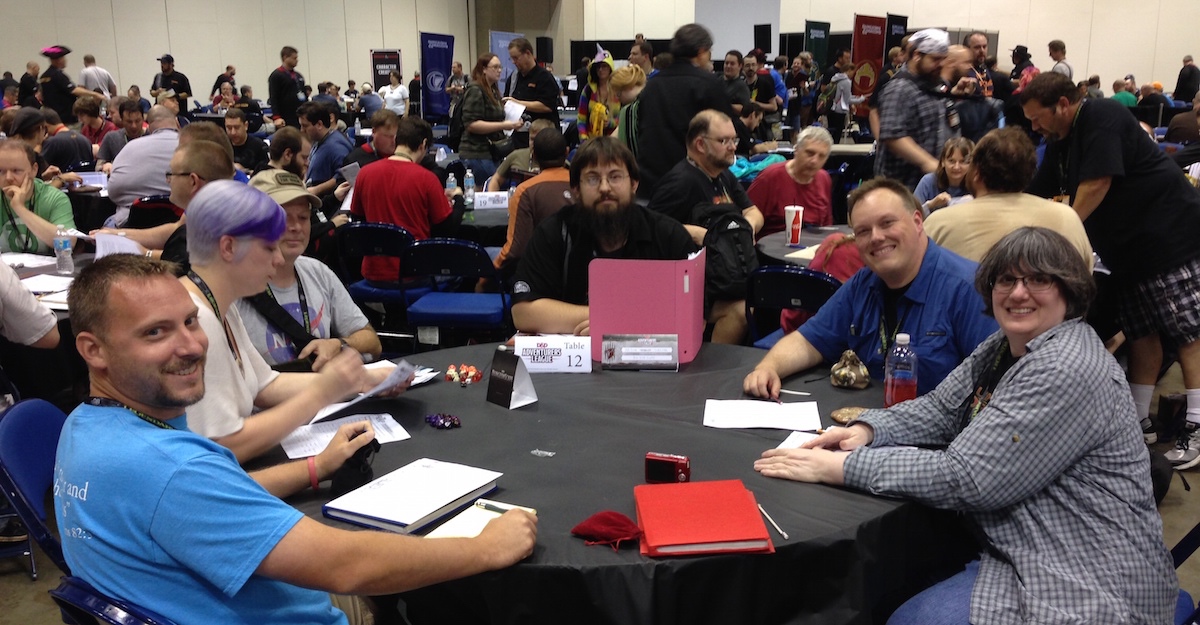 One Voice in a Large Story

If you're used to running home games, running games for organized play will be a different experience. In organized play, you aren't in full control over the entire experience your players will face in their campaign. You are just one cog in a huge campaign filled with players, DMs, organizers, and writers. The sharing of this shared world is important to preserve. If you stray too far from the story or get too loose with the adventure, your players may have trouble tying together their story into the larger events taking place in this shared world.

This is less practical advice but it's an important philosophy to keep in mind as you prepare to run your organized play adventure.

Like our home games, our organized play games should focus on the capabilities, actions, and decisions of the PCs. In organized play games, this will be harder because you're not likely to know either the players or the PCs they run. Have everyone introduce their character either through some sort of in-game situation, such as an NPC asking about their background, or by letting the lens of the game turn and behold each of the characters in turn.

Write down player and character names. Write down race, class, level, faction, background, and any other notes of interest to the player. You can use this handy D&D Campaign Worksheet to track all of this information.

It's equally important to note the mannerisms of your players. It's easy to focus on one charismatic player and ignore those who may not be as comfortable speaking out with a table full of strangers. Take careful note to ask for the views or actions of each player in a scene. Ensure they get a vote in decisions and draw them in by giving them skill checks based on their race, class, background, or faction.

During the game, take a moment to review your campaign worksheet to ensure you've engaged each of the players recently. It's an easy thing to overlook, particularly if you have a lot of players, and will make a big difference to the table if you do it right.

Running organized play games requires more effort than us lazy dungeon masters might be used to. Take the time to read through the adventure you're going to run, more than once if possible.Note the important beats and connections throughout it. Outline the scenes on a piece of paper so you know where the most important threads are to tie PCs throughout the adventure. It sucks to have to force PCs towards a particular direction when you and the players lose the clues that move the PCs from scene to scene.

It can also certainly help make for a better game if you can print handouts on parchment paper, bring maps of the cities or overland areas, and bring some face cards for the notable NPCs. This can further reinforce the story for you as you prepare the materials. Tactical poster maps and miniatures can also bring a lot of fun to your game.

Above all, take the time to really understand how the adventure works.

Don't Be A Slave to the Adventure

Once you know the adventure inside and out, make sure you are ready to modify it for the fun of your table. If an adventure has a particularly weak spot or an area where it begins to focus too much on the story and less on the actions of the players. Without going too far off the rails, figure out how to turn the adventure so it builds on and reacts from the actions of the PCs.

There are few weaker excuses than "that's the way the adventure is written". While you are only one piece of the large machine of organized play, during the game you are the one ultimately responsible for the fun of the group. If an adventure strays from that fun, it's up to you and you alone to bring it back.

Tie the Threads Between Adventures

Adventures in organized play live in a single shared campaign and players love to see how each adventure ties back into this campaign. These connections can get lost if you, as the DM, don't know what those living threads are. Take the time to read the other adventures in the path. Note the NPCs and events that take place across them. Write down the names of reoccurring NPCs and be prepared to reference them in the adventure you run. Have the PCs already interacted with the NPC? Did they just accomplish a heroic act? Make those actions and interactions count. Have NPCs refer to their previous deeds. The world should be a moving and evolving place, even outside of the games you personally run. Show your players that their actions in other adventures changed the world.

Pay Attention to the Rules

When running organized play, you might not have the same freedom to count on your players to know all of the rules of the game. Because of this, you'll want to take more time to understand the basic rules and take note of interesting character rules that come up. In many cases new and newer players will be counting on you to help them understand how the game actually plays. With a new edition, like 5e, that can take a bit of time but it's time well invested in the long run.

Organized play usually has its own set of rules in addition to the core rules of the game. You'll need to read and understand these rules as well. If you're running the D&D Adventurer's League, here's the full set of D&D 5e and Adventurer's League rules. Mark and remember.

As players take their PCs from game to game, they have a baseline expectation for experience, loot, and other tangible rewards. Make sure you understand that expectation when reading through the adventure. Screwing this up could set back a player's goals with their PC and have a negative impact not only on their PC but in the games they play in the future. On your initial read of the adventure, mark locations where loot, gold, and other tangible rewards such as D&D Adventurer's League renown points are given out and make sure you do so when running the adventure. This might be the only time you play with a particular player so you might not have a chance to make it up in a later session.

Thanks to the Community

While writing this article at our friendly local Starbucks on Veteran's Day I asked for feedback on Twitter for tips on running D&D Adventurer's League games. Special thanks to Teos Abadia, Rob Bodine, and Brett Abbott for their excellent suggestions. Much of the content of this article comes from this feedback.