For this episode of the DM's Deep Dive, we talked with Stefan Pokorny, the creator and owner of Dwarven Forge to dig into his tips and philosophies for getting the most out of the best terrain for our D&D games.

You can watch the full interview with Stefan below on Youtube or listen to the podcast on the Don't Split the Podcast network.

Here are some notes from the interview.

Take it out of the box (some people just collect it). Use it!

Think generally about what you want to make first. Visualize it. Imagine what you want. Take the pieces out. Fiddle around with them. Build something cool. Build the story around what you build.

The latest Dwarven Forge sets (the Dungeon of Doom!) include pre-planned rooms that fit on a tray you can move around. Zaltar's Gameroom is one such chamber.

Start with a vague idea of what you want. Throw your pieces out. Build the detailed set that seems cool. Build your adventure around that.

It doesn't matter if your published module needs something specific, build with what you have and modify the adventure to fit around the dungeon you can build. It doesn't have to be 100% accurate.

Stefan doesn't do any planning when he starts building a dungeon. He might have a vague idea of what he wants. Stefan's game is pretty standard—go through a dungeon, kill orcs, and take their treasure.

Visualize the dungeon from the inside. Pretend you're walking through it, what would you expect to see? This is a great DM thought exercise like seeing through the eyes of your villain.

Build the story in your head while you're putting out the pieces of your dungeon.

One idea is to build a dungeon that the characters must escape instead of the one they explore.

On a limited budget, consider what it is you want to make. If you want houses and villages, go for the city builder set. If you want castles, go with the castles sets.

The most basic set, the one that is most popular, is the standard dungeon room set.

Mike's note, I find that a single Dwarven Forge dungeon set makes for a great travel set. You can build small rooms, passages, intersections, and the like. If you're running a dungeon where those sorts of pieces fit the story, a single set of Dwarven forge dungeon pieces is a great buy. Stick it into a Stanley toolbox and bring it to your friendly local game shop or wherever you run D&D.

Corners, walls, and floors are the main pieces for the dungeon set. You can build just about any layout with them if you have enough of them. 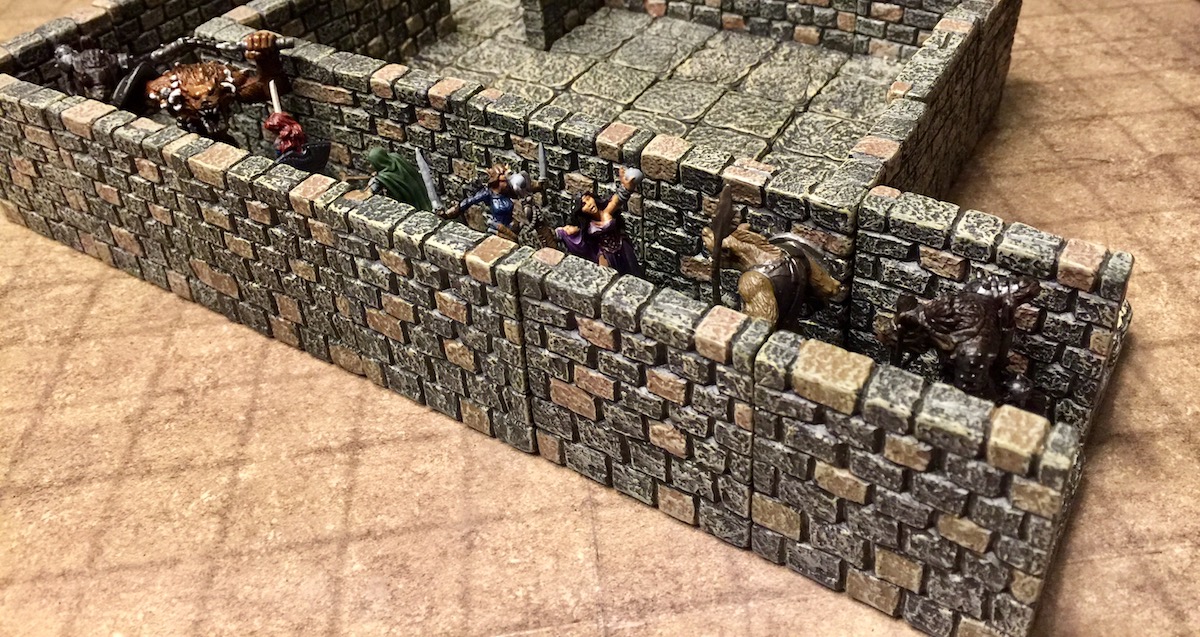 Passageways can be deadly. Monsters attack from the front in the back and the people in the middle can't do anything. Narrow passageways are killers.

Stefan plays with brand-new players and kills them with the same traps from 35 years ago. He's teaching people not to fight in narrow hallways six people at a time.

Dwarven Forge has some nice corridor pieces but one can also build them with the stock wall pieces placed back to back.

Stefan sees a lot of people who use special lighting effects and loves the modders who modify existing Dwarven Forge pieces to turn them into something new. They might embed lights in them. The "Dwarvenite" pieces are easy to cut (since they're PVC).

Mike's Tip: While we often think about Dwarven Forge for combat scenes, there's no reason we can't use them for exploration and roleplay scenes as well. Any time we want to visualize the scene, we can use Dwarven Forge to do so.

Stefan turns the lights down, puts on the music, and lets the theatrics go crazy.

In Stefan's campaign world, the dungeon is right below the city. As players come in and go, their characters can go back up to the town and sleep in their own bed.

In the Dungeon of Doom, they now have "terrain trays" that let us build out rooms and move them around, either in our homes or to our local game shop. We can build up a whole room on a terrain tray using the magnetic pieces and keep them built but still move them around when we need.

Cut up t-shirts work well for fog of war. Build out a big dungeon and cover up the parts that the characters haven't seen.

"What artists inspire you and your style?"

"What was the most difficult piece of terrain you created?"

The caverns were really hard. The molds for them are tough because of "undercuts". Getting the piece out of the mold when it's a steel mold takes a lot of thought. They do all of their experiments before the Kickstarter begins.

"Do you have advice for running a Kickstarter and were you surprised at their success?"

Stefan thought they would reach more people and do better. DF is a niche but they're hoping to reach out to as many people as possible.

Stefan still plays first edition. He likes the danger. He likes mages with two hit points. The younger generation doesn't know how hard it was back in the day.

Let's keep our humanity by playing D&D physically at the table! Dwarven Forge is trying to save mankind. That said, never say never to virtual Dwarven Forge.

"What should I do with my DM who doesn't spend enough time building his Dwarven Forge?"

The group can spend some of their money to buy the DM more Dwarven Forge!

"What are some of the set-pieces you build for Storm King's Thunder?"

Stefan doesn't use modules. He builds his own dungeons and his own world. He misses the banter of people who played one module or another.

Stefan's world of Mytras will be available soon! Word on the next Kickstarter isn't out but....potentially a return to caverns??