On June 2018 episode of the DM's Deep Dive, I had the great pleasure to talk with Paige Leitman, organizer for Dragon Con D&D games, writers of con-created content for the Adventurers League, and moderator of the 126,000 member D&D Facebook group. Paige had some wonderful insights into the differences between Adventurers League organized play groups and groups who have come to the game through online streams such as Critical Role. In this episode Paige and I talk about this difference, what it means, and what we can do about it.

Here are some notes from this episode.

Paige uses her commute to catch up on streaming games.

Finding times to slide in streaming D&D shows can give us a chance to learn from a lot of DMs.

Paige will take the Broadswords over the news every morning.

Play different games with different players at conventions and it will do wonders for your own game. Even in bad games, we can learn a ton by playing in other groups, watching other players, and watching other DMs. Mike mentions Truman Capote who said that, when interviewing a boring person, he asked "what makes this person so boring? What drove this person's life to this spot?".

The idea of learning more from DMs doesn't mean we DMs have to throw away all of our experiences. Instead, we can think like a Bayesian and take in new evidence to update our prior understanding of the game.

"Dude, no one is asking you to be Matt Mercer. No one is Matt Mercer except Matt."

According to Mike's flawed analysis of comments on Paige's post about learning from Critical Role, 60% were positively inclined towards learning tips from Matt Mercer.

There is resistance to the idea that we can learn from streaming. "I'm not Matt Mercer and if people are looking for that, they should find another table." This is said often and, frankly, shuts the door on learning from an excellent DM.

When we look at streaming from the position of organized play, what do we see? 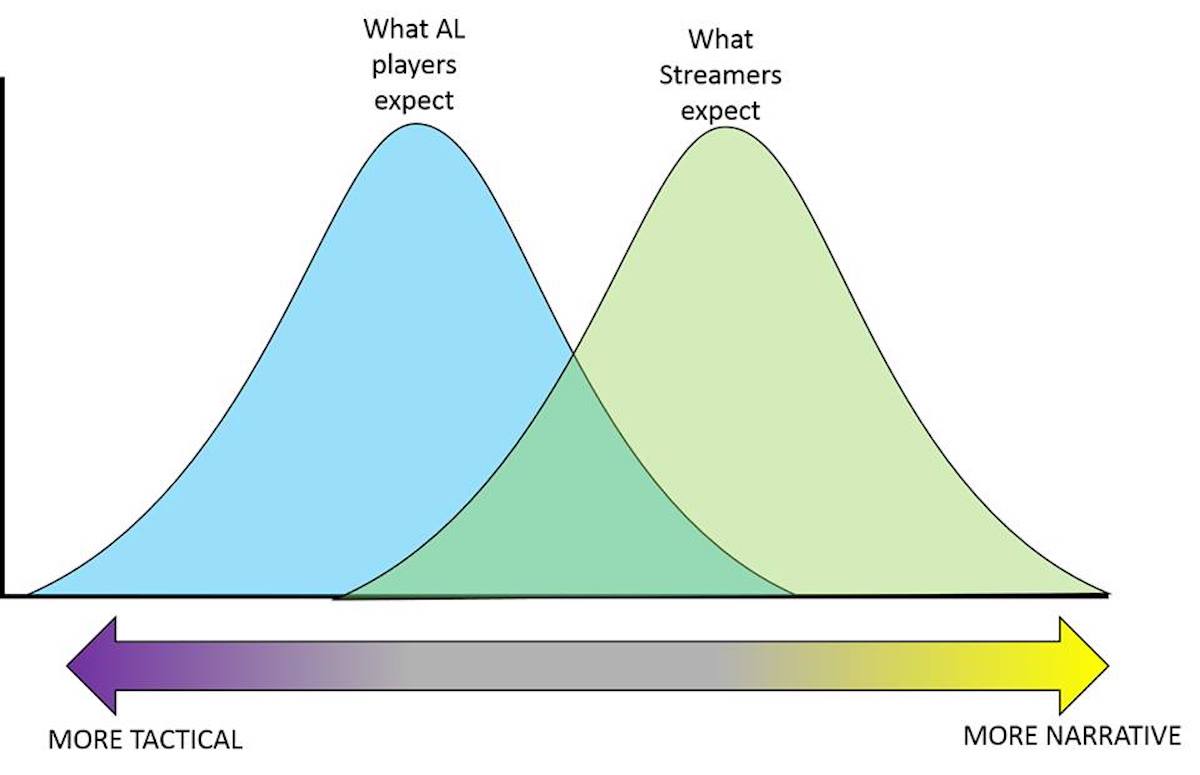 Paige describes a continuum of tactical play on one side and story focused gaming on the other. Streaming leans more towards story and organized play leans more towards tactical but there is an overlap between the two of them. There is a bell curve for both types of gamers with each leaning one way or the other.

In streaming games there is a bigger focus on the characters and might spend a lot of time doing things like shopping at a store. This would drive con coordinators crazy. Adventurers League games have fixed time frames and can't spend a lot of time focused on individual characters. Instead AL adventures focus on the story of the adventure itself and a clear out line of scenes including refined combat encounters.

Paige's gut feeling is that WOTC is pushing towards more story-focused adventures. Paige brings up Rrakkma as an example adventure that focuses on a more narrative arc. The upcoming Season 8 adventurers seem to fit this model as well.

Paige and Mike discussed the Red War, a player-generated storyline in Mulmaster. Mike thinks that the fact that a bunch of players got focused on the narrative of the story instead of some mechanics-focused thing was pretty awesome.

Mike's Note. The D&D Open at Origins was a wonderful narrative-focused adventure that was heavily timed but still gave players a rich and full story with lots of options and excitement. I played it for about 9 hours and we had one battle against one foe that lasted maybe 5 minutes. The game still had us on the edge of our seats.

Paige describes how recent con-created adventures give the DMs tools to handle it when characters subvert or bypass combat encounters with improvised skill check situations. This is a good way of giving DMs the tools they need to handle improvised situations as they pop up.

Is audience participation in streaming a negative?

Paige thinks its nice that people give money to a stream and good on them for getting it. Mike's philosophy is "never get in the way of someone else's hustle". If they can make money from it, go with the gods.

Is there some way in AL to make better matches betweens DMs and players between tactical and RP?

Paige says they've tried that in their local conventions and it can work at conventions or game stores. When looking for players, Mike described his game as a "story focused game that uses a lot of Theater of the Mind" and that helped players select his game based on that style. In organized play games, Mike saw tactical players come unglued when they suddenly found themselves in narrative combat.

How do The D&D AL Epics shape people's views on Organized Play games?

People love the combined group and high epic scope of epics and opens and the bigger multi-table games. Shameless plug, Mike wrote Vault of the Dracolich as a multi-table event between editions.

Paige believes that a good home game is likely better than a typical Adventurers League game but no home game can do what an Epic or Open does. Mike got to mention how his paladin was the first character whose soul was eaten by the Soul Monger during the D&D Open at Origins 2017. They announced his death from the balcony of the ballroom and Mike got a unique certificate from Shawn Merwin and Teos Abadia themselves.

Paige believes that integrating these new cultures into the Adventurers League and that it resides with the DDAL admins who can reach out to streamers and start to think about how to bring these groups together. Adventures can be written differently to support more narrative games.

Paige's last piece of advice is go out there and talk to five new D&D players to hear their experiences and drives for the game. Try to spend time understanding this new group of people coming to D&D.