The 5x5 Method for Antagonists

I'm a huge fan of Dave Chalker's 5x5 method for campaign design. If you don't know about it, go read his primer on the topic and come on back. The 5x5 method lets you build an open world for your players to explore but gives enough structure that they don't feel lost and it won't drive you crazy trying to develop for it. I've used variants of this process in my own game and it works very well.

In developing a small Gamma World campaign, however, I found it more interesting to focus the 5x5 method on NPC generation instead of story seeds. Typically in the 5x5 method you would develop five seeds such as a nearby alien crash sends strange violet clouds over the PC's town. I found it a little more challenging to come up with interesting seeds this way. Instead, I began my 5x5 method with main antagonists. They aren't always bad guys (remember, the best bad guys think they're good guys), but they generally are the ones the PCs will face.

Developing these antagonists is pretty easy. Here are the three things I come up with for each one. 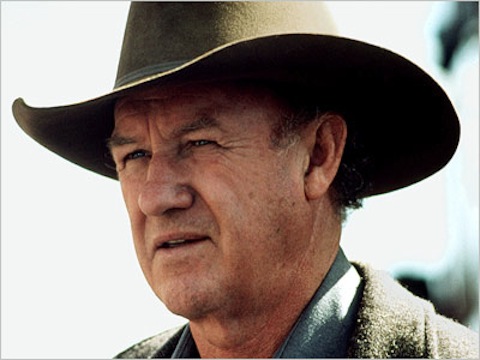 Pick a character from popular fiction

I love squeezing awesome NPCs out of popular fiction, regardless of genre. For example, a main antagonist might be based off of Gene Hackman's character, Little Bill, from Unforgiven. He's a great villain, one who believes what he does is right, one that you might even like and respect. You can pull these sorts of characters from everywhere, not just from fantasy or action stories.

I get lazy here. I like to just make a variant off of the original character's name. For our Gene Hackman Little Bill NPC I might just name him Gene Small. It's far enough away that players won't figure him out too easily but it's a fun name.

What does he want?

This is my favorite question to ask of a new NPC. What motivates your antagonist? Why is he or she right? In the case of Gene Small, above all he desires peace and order, to a fault. In the world of Gamma Terra, there's little order in the world. He may have beaten his own small town into order but he will lash out like fire if someone shakes that order.

Where is he from?

Though not as important, learning the background of an antagonist makes him feel deeper. The PCs might learn this background through investigations and other NPC interactions in bits and pieces. With Gene Small, he might have had a very strict upbringing by a father who hated mutants and hated the chaos of Gamma Terra. They had run-ins with Porkers and other animalistic tribes with few good results. Part of a roaming gang, Gene Small earned his hard bark roaming Gamma Terra with a gang of self-described lawmen who shot down just about anyone who drew a weapon on them, which was most. Finally he settled down in his small town to retire, though a man like him never really retires. There he and the remains of his gang, the Silver Barrels, hold order and push back the chaos that dares to encroach the town.

Now that you have one such antagonist, time to build four more. Each of them should be NPCs you really want to play out. This way, no matter which direction your players head, you'll be excited to flesh out the path they choose.

Build out each of the the paths

With five awesome antagonists ready, your next step is to fill out four adventure seeds for each of them. With our Gene Small antagonist, we might start with a young man who fled the town after getting into trouble with Gene Small. Next, it might turn out that Gene Small sent some of his hired men to wipe out a town of mutants nearby. Third, Gene Small's technician might be seeking out anti-mutant Omegatech at the ruins of a nearby factory. Fourth, Gene Small sends his men against the PC's town directly in an all-out war. Finally, the PCs might seek out Gene Small in his own town and finish him off. These are obviously loose threads but some interesting decision trees within this might make for a lot of fun.

As you set up these threads for each of your primary antagonists, you might find built-in decision trees. Maybe a Porker Emperor poses a bigger threat to the town than Gene Small does so the PCs ally with him and his men to battle against the Porker Emperor only for the PCs to find that Gene Small's merciless ways split the alliance. There's lots of room in here when you have five fully filled out antagonists and a series of plot hooks for each of them.

What you're left with is a wide and diverse world for your players to explore with some very interesting antagonists and a lot of interwoven stories that play out as your players navigate them.