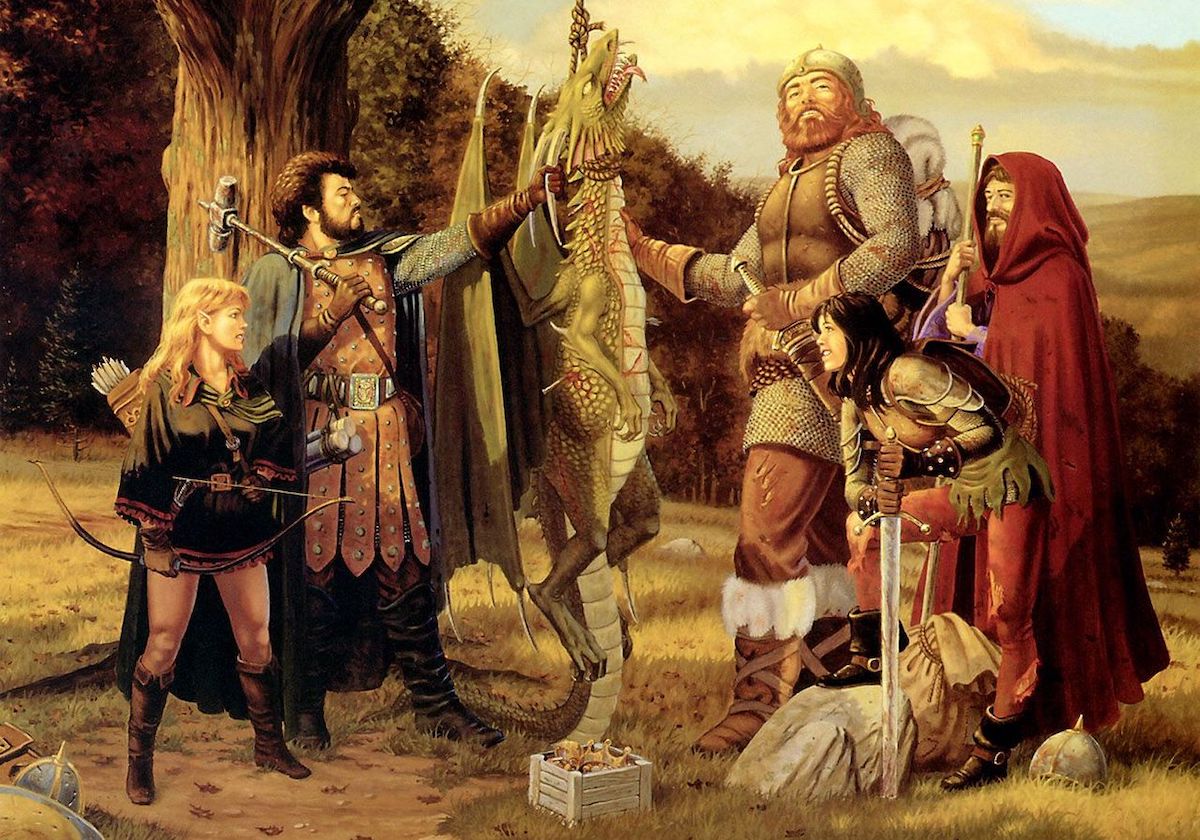 "Dragon Slayers And Proud Of It" by Larry Elmore.

With more hit points, better spells, and more character options available, the threat facing higher level characters is not nearly as deadly as it is at 1st level.

The Entry Point of D&D

It also doesn't help that brand new players to D&D nearly always start with 1st level characters. With limited options available, learning how to play D&D is easier at 1st level than it is at higher levels.

It's unfortunate that it's also the the most dangerous level to play.

Some hard-nosed veteran D&D commentators might state this this is how the game is meant to be. D&D is about the threat of death, they might say. We each have our opinions and this is not one I share. I think D&D is about sharing tales of high adventure. While the risk of death is important, it need not be so much more prevalent at 1st level during someone's first exposure to D&D. I also argue that this threat does not maintain pace as characters level up. Higher level monsters are not nearly the same threat to high level characters as low level monsters are to 1st level characters.

There are some easy fixes to this problem. Starting characters off with five or ten more hit points would make a huge difference and not affect much of the rest of the game in higher levels. Removing death due to massive damage is another option. Characters will still drop when they hit zero hit points but they won't be instantly killed by a rare critical hit.

If we prefer not to house-rule our way out of the dangers at 1st level, we can take more care on the DM's side of things and pay particular attention to the combat encounters we design for 1st level characters.

When designing any combat encounter in D&D at any level, we must consider a few variables. You can read more about this in A New DM's Guide For Building Combat Encounters. The variables we note when creating a combat encounter include the following:

Whatever combat encounter you're designing for 1st level characters, you still need a story and that story will still dictate the types and quantity of monsters the characters might face. Sometimes this story may be "there are giant rats in my cellar" (a Teos Abadia favorite...) or "there are giant constrictor snakes in the well outside of the haunted mansion" (from Ghosts of Saltmarsh. Simple stories for new adventurers.

You might think limiting yourself to monsters of CR 1/4 or less would be burdensome but over seventy such monsters exist in the Monster Manual alone. With some reskinning, changing out armor, changing weapons, and otherwise altering the flavor of these monsters, there is really no limit at all.

Aid gives each character a bonus of 5 hit points to their cap and to their current hit points for eight hours. That's a good boost for 1st level characters and doesn't require any houseruling.

I often quip that 1st level adventures should be limited to a stern conversation and a fight with a giant rat. 1st level adventures need not be long affairs. When characters reach 2nd level, they become much more robust. We don't need to be nearly as careful at 2nd level and above. Thus, its always worth while to get characters to 2nd level after four hours or less of game time.

Consider leveling characters to 2nd level quickly; maybe even after the first combat in an adventure.

Paying Special Attention to the Beginning of D&D

When we think about a player's first experience playing D&D, we want it to be a fun and positive experience. Getting killed by a pack of six wolves in the first scene in the game isn't much fun. We DMs have a lot of flexibility when designing combat encounters throughout our D&D games but 1st level games require their own special attention. Use fewer monsters than characters, keep them at CR 1/4 or less, watch their damage, and let the players enjoy their first game of D&D.