From September 2014 to March 2015 I published a set of articles with tips for running Hoard of the Dragon Queen, the first published Dungeons & Dragons fifth edition adventure. If you haven't seen them, you can read them all here:

I chose not to cover Rise of Tiamat the same way because, during my playthrough, the story of the PCs ended up moving the campaign far outside of the bounds of the adventure. A chapter-by-chapter guide does little good when we skipped entire chapters and rewrote others.

That said, there is value in looking at this half of the Tyranny of Dragons adventure path in whole. Thus, here we are. 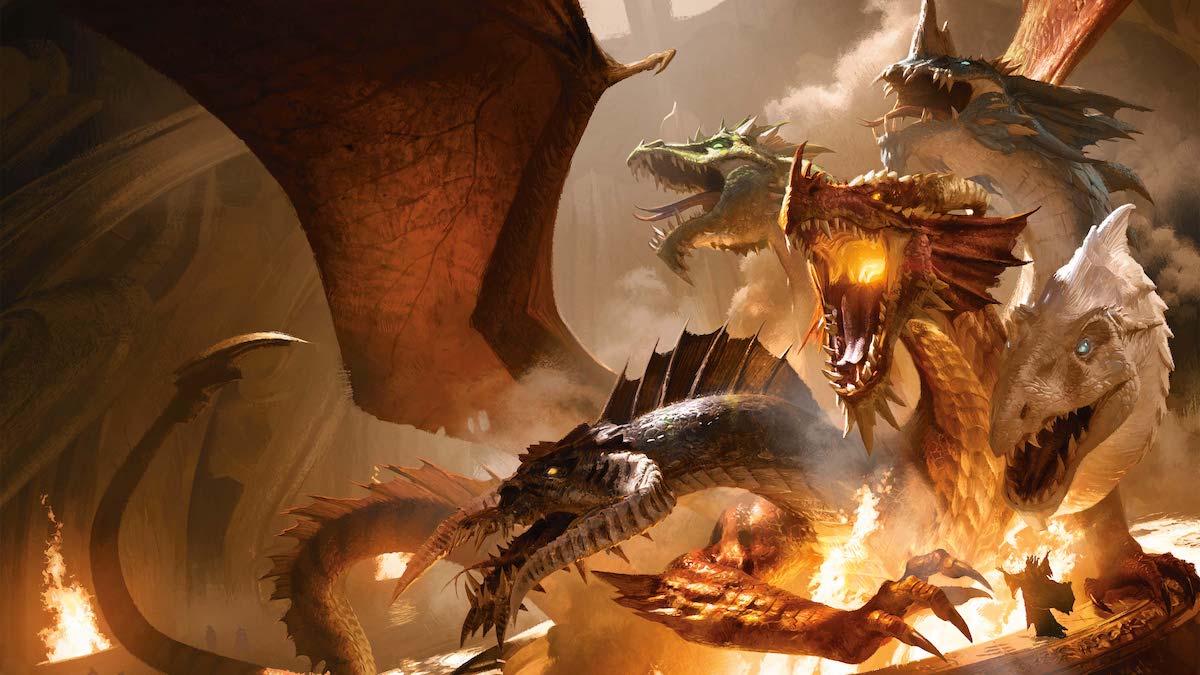 As always, this aricle will be packed with spoilers. Please take care if you plan on playing through the adventure and maybe catch up on your viewing of Bob Ross videos instead.

The Engineered Plot of Rath Modar

We will begin with a look at one potential backstory for the entire plot to raise Tiamat and it all begins with an unexpected villain - Rath Modar.

Back during the Sundering, the Red Wizards of Thay managed to capture more than one Chosen of the gods. They learned how to channel the divine energy of these mortal beings into machines and magics of great and terrible power. They conducted their dark experiments in the Doomvaults from the adventure Dead in Thay. Rath Modar, one of these Red Wizards, noticed the potential of one of these Chosen, the Chosen of Tiamat.

Rath Modar released Severin and taught him his true potential as the Chosen of Tiamat. Rath Modar placed him in power of the Cult of the Dragon and engineered the rituals required to draw Tiamat from the Nine Hells into Faerun where the Goddess might thwart Szass Tam himself and, perhaps, place Rath Modar in charge of Thay.

In this alternate storyline, Rath Modar is the brains behind the rise of Tiamat. He is no idiot. If the PCs face him, they usually face a simulacrum or a clone. Sometimes they might find themselves facing multiple Rath Modars, each of which has its own forked history and appearance. Rath Modar travels to many places and conducts many plots.

This can make for a fun side adventure in the campaign. Hunting Rath Modar in the Doom Vaults is the true way to face a brilliant wizard who is unlikely to ever put himself in harms way on purpose.

Return to the Mere of Dead Men

Of all of the locations in Hoard of the Dragon Queen, few have as much depth (pun intended) and history as the Mere of Dead Men. If you haven't read it, give Ed Greenwood's article, Voaraghamanthar, "the Black Death", a read.

This article is packed with interesting background stories and fantastic locations. If your group had a good time in the swamp and around Castle Naerytar, you might consider a side-adventure that returns them to the swamp. If they met the dragon, Voaraghamanthar and, maybe secretly, his brother Waervaerendor, this is a great time to reintroduce them. These two black dragons seek great treasures beneath the swamp and, perhaps, so too does the Cult of the Dragon.

The Mausoleum of the Ebondeath, a former lich's tower turned tomb for the powerful dracolich, Ebondeath, would make a great setting for an adventure. Perhaps Rath Modar has returned to the Mausoleum to seek out an artifact to aid in Tiamat's rise. Maybe he seeks to raise Ebondeath as one of the Heralds of Tiamat now that the black dragon mask is destroyed or captured by the PCs.

This is a great way to get your level 13 PCs into some high level undead dungeoneering and gives you some freedom to build out a cool sunken tomb of a dracolich.

As they battle the Cult of the Dragon, our heroes will no doubt forge many alliances. Perhaps these allies include the metallic dragons, the armies of Waterdeep, or the elves of the Misty Woods. How do we best incorporate these factions?

The easiest way is to narrate a huge battle against the Cult of the Dragon, its mercenary army, and the devils they have summoned already from hell in the bloody sands of the Well of Dragons. Our heroes might be given specific areas to take, villains to cut down, or machines of war to destroy while their allies fight the armies of the Cult until the Temple of Tiamat remains unguarded before them.

This adventure isn't any fun if the party doesn't get to face Tiamat herself. While some groups might enjoy thwarting the plot and preventing her ascent to Faerun, most will want to fight her.

We can solve this problem easily enough by ensuring that the PCs are well aware of her imminent arrival. Instead of their actions preventing her rise, they ensure that, when she does arise, she will be weakened by their efforts.

This weakening can occur in two ways. The first is the capturing and destruction of the dragon masks. The masks are part of her channel to the prime material plane. With their destruction, her ascent will be much harder and she will be weakened when she makes her rise.

Stopping the proliferation of the hoard is another way to weaken her ascent. Rath Modar and Severin had planned to capture a much greater source of treasure than they end up having. Losing Skyreach Castle and its treasure hoard is a great loss.

Severin, Rath Modar, and the Cult of the Dragon do not sit by as the PCs attempt to thwart their plans. They have another way to bring up her ascent, the sacrifice of the Heralds.

The Heralds of Tiamat

The Heralds of Tiamat are mighty dragons, her first children on Faerun, who have remained hidden for centuries. Unlike most dragons, these do not seek vast fortunes and fame. They have grown mighty in the shadows and quiet, knowing that, one day soon, they will be called to Tiamat's side.

That time is now.

As the PCs destroy the dragon masks, the Cult builds altars for each destroyed mask and calls a Herald to the altar. The altar drains the life out of these mighty dragons and creates anchors between Faerun and the Nine Hells. Tiamat can use these anchors to pull her way into the prime material plane.

These heralds will not come into play until the PCs arrive at the Well of Dragons. When they arrive, they will see the altars and will want to defeat each of the heralds to weaken the anchors before Tiamat's rise.

The Temple of Tiamat, Hidden in Shadow

The PCs might get a glimpse of the Temple of Tiamat if they see any portals to the Shadowfell in their travels but only when Tiamat's rise is imminent will it shift into the prime world and become accessible to the PCs.

In the Rise of Tiamat adventure, Tiamat herself may be under one or more disadvantages when she rises depending on how the factions go. We can forgo the faction implications and instead implement these difficulties depending on how well the PCs did in acquiring masks and cutting down the Heralds.

You may want to tune these a bit further as well, depending on your own group. Perhaps she doesn't take as severe a hit to her hit points if your PCs inflict particularly high damage. She can be tweaked in other ways to make her a clear challenge to the PCs. Maybe her breath weapons aren't reduced so severely if your group has a lot of high hit point PCs.

Still, if the PCs went through the trouble to thwart her clean entry into Faerun, you'll want to ensure they see the results of that effort when Tiamat comes screaming and clawing, wounded and vulnerable, from the maw of hell.

Don't steal that victory from them even if you do want Tiamat to be a good challenge for them.

As written, Rise of Tiamat ends when Tiamat is sent back down into the pits of hell. Yet how many times in our lives do we actually get to run a D&D game all the way to level 20? Do we really want to end it at level 17ish or do we want to keep going and see how the full range of the game plays out?

When Tiamat is sent back down into the pits of hell we can give our PCs (and our players) a choice. They can enjoy their victory and retire to a life of comfort and ease. They can become masked lords of Waterdeep or hunt pirates on their floating castle.

Or they can solve a a bigger problem. Tiamat isn't dead. She's just banished back to hell and the rifts she has opened to hell remain open unless the PCs go down into three layers of hell including Cania, Minauros, and Tiamat's home plane of Avernus in order to break the ethereal chains that bind the Nine Hells to Faerun. It's quite possible Asmodeus himself wants the PCs' help in breaking the anchors and capturing Tiamat in hell to prevent a civil war between devils loyal to Asmodeus and those loyal to Tiamat.

This "extended cut" of the adventure gives you some room to build your own mini-adventures in hell and the gloves are off. You can throw the kitchen sink at them if you want to. If you're looking for a good reference of hell, check out the D&D Classic sourcebook Tyrants of the Nine Hells which has interesting descriptions of the various layers of hell.

The Adventure of a Lifetime

We play a lot of D&D adventures but its rare for us to watch our heroes fight gods. When running an adventure of this magnitude, it's always worth taking a step back and enjoying the big picture. To quote one of my players:

"I just hit Tiamat with a vorpal sword for 150 points of damage. How many times will I get to say that in my life?"