This is the second part in an ongoing series of articles to help us make the most out of the first published 5th Edition Dungeons and Dragons adventure Hoard of the Dragon Queen.

Like the previous article, this article is full of spoilers for the adventure. If you plan to play in this adventure, stop now and return to your regularly scheduled cat videos. 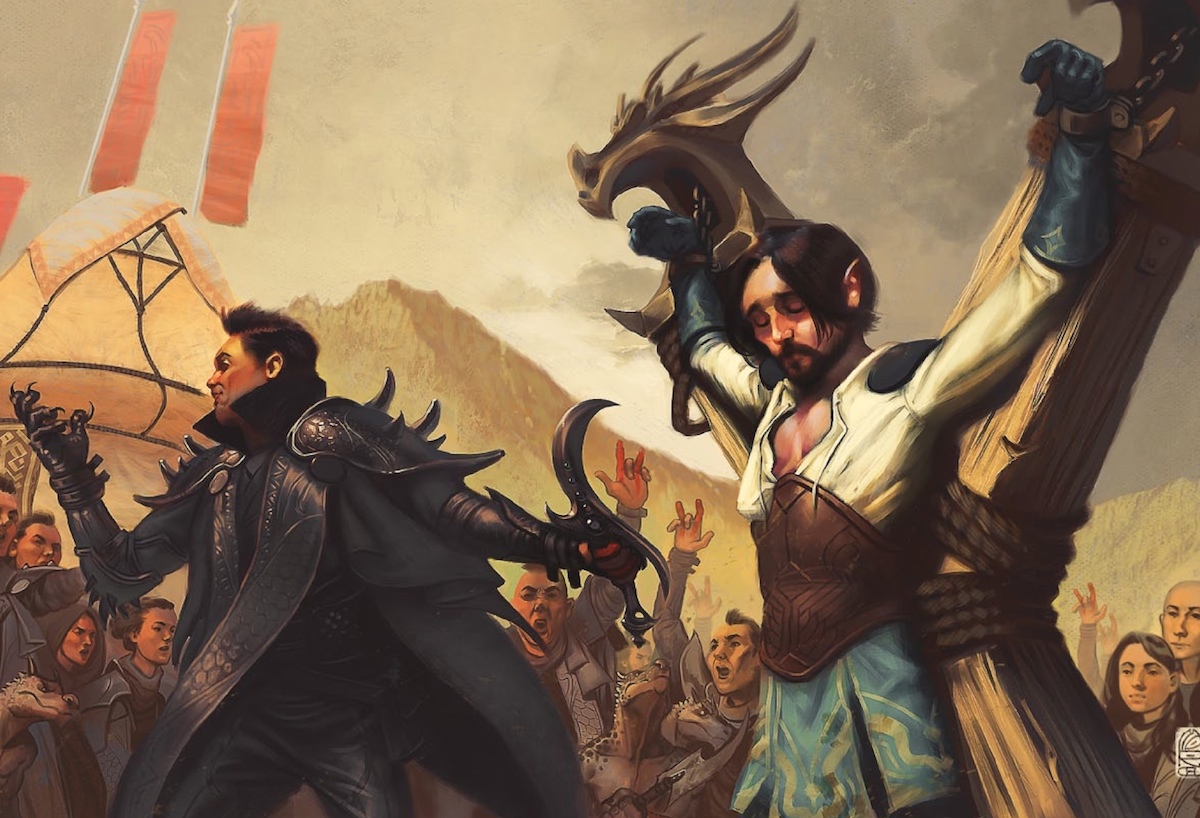 Image Copyright 2014 Wizards of the Coast LLC. Used with permission.

Things that Have to Happen

Though the second episode of Hoard of the Dragon Queen is another sandbox-style adventure, there are some key things that have to happen to tie together the story of the adventure. As you prepare and run this part of the adventure, keep these things in mind:

The camp itself evolves once the PCs leave at the end of the adventure so its important that they leave the camp before going right into the cave or everything gets confused. You can ensure the PCs don't go where they don't belong by surrounding the caves and the leaders' tents with veterans from the Monster Manual and making it clear to the PCs that these veterans are beyond their capabilities.

Likewise, Erelanthar, a Harper, is somewhat critical to understanding what exactly the Cult of the Dragon is up to. If he dies, it doesn't ruin the adventure but you'll have to do some work to the the threads of the adventure back together again. If the PCs fail to rescue Erlanthar, it's likely Rezmir will kill him so you'll want to introduce important information some other way, maybe a buried journal or something else.

The PCs may be jonsing to go kill Cyanwrath, especially after he beat the snot out of one of them in the previous episode. You might have members of the cult mention these leaders but you're best off keeping them out of sight. You can do this by having them in the main tent or in the cave surrounded by veterans.

Though this episode is clearly a sandbox, it's a very delicate one. The bandit camp has about 150 to 200 enemies in it so any direct assault is impossible. Instead the PCs can choose to infiltrate the camp with stealth or deception. If your group isn't really into these sorts of skill-based encounters, you may want to lead them towards the outer edges of the canyon where they can fight bandit patrols and perform a quick sneaky operation to extract Erlanthar.

Players can get frustrated by the delicate nature of the situation. Work with them to give them an idea what decisions can work and what is likely to put them in a bad spot.

Instead of simply laying out options or reinforcing options the players discuss, you might also indicate what type of gameplay accompanies these options. If they're going for deception, let them know they'll be doing a lot of sensitive PC interaction. If they're going for infiltration let them know it will be a lot of skill checks and challenges to sneak in, cause distractions, and grab up Erlanthar. If they are going around the outer edges, tell them they're likely to encounter sentry groups but can likely fight them without alerting the rest of the camp. This lets players choose the path with the gameplay they're most interested in doing. Combat-focused groups can go beat up patrols while roleplayers can have fun bullshitting their way past the guards.

The Dragon Cult likely hired lots of different types of mercenary groups to engage in their raids. This is a good chance to fill out these groups and let your players have fun navigating between them. You might have three groups of mercenaries: the soldier-like Storm Blades, the scruffy and undisciplined Red Sun mercenaries, and the horrible terrorizing Dark Sail pirates. These factions give PCs the option to work factions off of one another as part of their infiltration and add some texture to the camp itself.

It's OK to Split the Party

If players choose infiltration and deception as their path to the camp, let them know it's ok to split up if they want. Don't punish them for their choices but make sure to give every player enough screen-time. Even if they're separated, give each player a couple of minutes at most to describe what they're doing and what result it has. Feel free to leave them in cliff-hanging situations.

"Just then is when you notice that one of the guards recognizes you. Next player!"

Again, because this episode is such a powder keg, you want to be careful not to stress people out too much. Even though it's very dangerous, encourage and reward them for bold moves. Use the mercenary factions against one another to make it a bit easier for PCs to make mistakes and still accomplish the job. Give players advantage for smart and bold moves and let them use it to get out of tough jams.

The descriptions of the bandit camp are relatively vague. This gives us lots of room to let us and our players help define it. Think of the camp and everything in it as a big amorphous glob of proto-goo. As your players begin to focus on parts of it, those parts begin to form. That goo can transform into bandit huts, beer garden tents, fighting pits, wolf kennels, or anything else you and your players come up with during the game. Ask open ended questions, be a fan of your players' imaginations, and enrich the camp into a unique one your group is going to remember.

Is one of the players looking for a bar? How about they find a big cart full of kegs of beer that the Red Sun mercenaries are currently using to get shitfaced. Work with what the players give you and watch the camp form into something wonderful.

Great Fun For the Right Group

For the right group the bandit camp can be a lot of fun. If a combat group tries to infiltrate the camp, however, it can end up being boring. Telegraph gameplay types, enrich the goings ons of the camp, and go with what the players give you to make this a fun open-ended episode. Stay close to Sly Flourish for advice on Episode 3 in a few weeks. In the mean time, roll on!