In the December 2017 episode of the DM's Deep Dive, I spoke to D&D designer Teos Abadia about encounter building for the fifth edition of Dungeons & Dragons. Our goal in this show was to dig deep into how we think about building encounters.

You can watch the episode on Youtube or listen to the podcast on the Don't Split the Podcast network.

We start off the show by designing a specific encounter involving a pair of ettins who hate their joined head but like heads on the other ettin. This is an example of designing an encounter based on the story first instead of just building it around a well-defined tactical combat encounter. It shows how we can let the scene play out how it plays out instead of trying to define it during design as a combat, roleplaying, or exploration scene.

Teos talks about focusing first on building an engaging scene before worrying about encounter balance or encounter type.

Teos then heroically looks at the combat encounter building guidelines in the Dungeon Master's Guide to figure out what level characters fit a pair of ettins. Mike's Note: I don't recommend we ever bother with the encounter building charts in the DMG anymore. Teos then looks at the charts in Xanathar's Guide which includes newly formatted charts for looking up the appropriate CR for a monster given characters of specific levels. Both he and I agree that the charts in Xanathar's Guide are much more useful than the guidelines in the DMG when it comes to building encounters.

The conversation moved on to how Teos scales encounters during adventure design for the D&D Open which must support characters from levels 1 to 10. This isn't a likely scenario for more than a handul of DMs but its interesting to hear the challenges of scaling battles across such a wide level range.

I shared my simple head-math that lets me gauge whether a combat encounter is likely deadly or not. The math breaks down to the following:

Assuming an equal number of monsters and characters, a combat encounter is just over the edge into deadly if the challenge rating of the monsters is equal to half the level of the characters.

Teos uses an Excel spreadsheet to figure out challenge level and many DMs use Kobold Fight Club to figure it out. Given the wide range of variance in encounters already, I believe that a simpler formula we can keep in our heads is just as useful as a set of charts, a spreadsheet, or an online tool.

For adventures on the DM's Guild or Adventurer's League, Teos wants to make it as easy as possible for DMs to be able to run a fun experience which often results in more detailed encounter balance guidelines.

We then discuss our previous episode of the DM's Deep Dive and the shift D&D is making from a tactical wargame to a more story-focused game and how that relates to Adventurer's League play which, in my opinion, lags behind the shifts taking place in home games and streaming games (no, I don't have the data for that, shut up).

I suggest that D&D AL adventures help teach DMs how to tune encounters on the fly to make the experience the most fun. I even recommend that D&D AL DMs get comfortable fudging hit points for the fun of the game, something that is likely an anathema to many in organized play D&D.

We then discuss how encounters are handled in hardback adventures—which focus almost exclusively on the story before considering encounter balance. In some cases this results in encounters much harder than we would expect characters to face. The frost giant invasion of Bryn Shander in Storm King's Thunder and the dragon in the mines in Tomb of Annihilation came up as examples.

We then talk about how we're looking at running Tomb of Annihilation by reducing the quest lines so we don't overwhelm the players and turning off daily hit point loss of the death curse so things aren't so urgent.

Questions From the Audience

"Do you design encounters differently for 'theater of the mind' versus 'grids'?

Teos does not tailor encounters one way or another. He tries to build encounters that are compelling for either situation.

I feel much freer with encounter design when I'm not worried about miniatures and a gridded map. I've run battles against 950 skeletons because I don't have to worry about squares and miniatures. When I don't worry about what fits on a battle map, I can design encounters based completely around the story regardless of the type, size, and number of monsters or the physical area in which they're encountered.

"What encounter have you designed that you are most proud of?"

Teos talked about a collaboration with other designers working really well. Teos liked what he did in the Artifact, an adventure based on the ideas of Clue. The characters have to interview ghosts to figure out who killed the archmage and with what. It's a very sandboxy adventure. Was it Colonel Mustard with the pipe?

I enjoyed building an encounter that took up my whole dining room table in a battle with a primordial in the heart of the abyss. 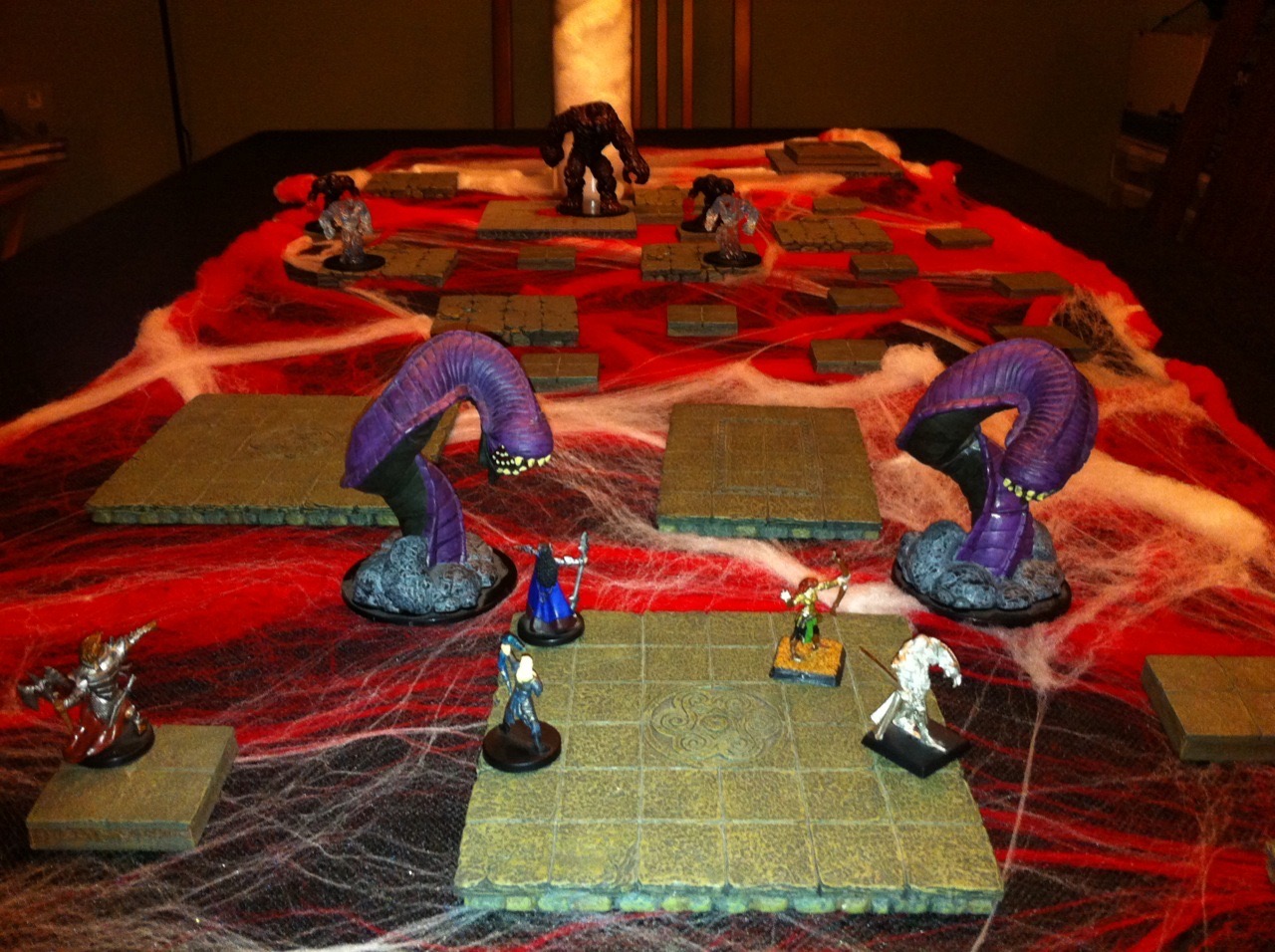 Teos talked about how he has a Terraclips temple he brings out regularly but it never seems to come into play so he puts it back upstairs at the end of each session.

"What are your favorite parts of Dark Sun and do you have any recommended reading or research?"

Teos likes the Veiled Alliance supplement that digs deep into all of the city-states of Athas.

Dark Sun lets the wilderness shine. The whole world is an antagonist trying to kill the characters (and everyone else).

Getting honey in Athas for survival means they are going to have to fight a giant wasp.

"How do you make challenging social encounters that don't lead to combat?"

I wonder, if NPC roleplay scenes often lead to combat, are the players telegraphing what they want from the game? If the barbarian is continually charging guards at the castle, throw them in a dungeon where they can fight everything they see.

"Do you worry about balancing encounters that show off character abilities or do you just put problems in front of the players to let them apply themselves?"

Teos doesn't use challenge levels to show off characters but will look at monster types that a particular character might deal with well.

I often talk about designing encounters that show off the capabilities of the characters but I rarely seem to do it. Instead I build encounters that make sense for the story and, in some of these, one class will really shine. I try in particular not to break a character's advantage and let them steamroll an encounter if that's how it works out.

"Have you ever given your PCs a Kobyashi Maru encounter?"

All editions of D&D are generally bad about retreat. No one knows how exactly to retreat and not have the last few people dead on the floor.

If you're going for a retreat, have special rules for it.

If you're going to have another success criteria for a battle, that needs to be clear to the characters.

I've definitely had hard situations where I'm not sure how the characters are going to get through it. Invariably one of the six players figures out how to get around something.

Teos and I agree that it can be dangerous to push characters to fail.

Storm King's Thunder is a good relaxing adventure that doesn't have these hard choices but your players might end up not seeing giants for two months.

Thanks again to Teos Abadia for letting us pick his brain on such an important topic.