For nearly two decades I've tried just about every style for running combat in Dungeons & Dragons. I have a huge collection of miniatures. I have bins full of beautiful Dwarven Forge tabletop terrain. I have a library of Pathfinder Flip Mats, probably a thousand flat plastic miniatures, and a ton of different tokens.

After all of this time trying many different options, I've found what I consider to be the ideal battle map solution:

A Pathfinder basic flip mat and some dry-erase markers.

Your Portable Horizontal White Board

The Pathfinder flip mat makes a perfect horizontal white board. You can fold it up and take it wherever you plan to run a game. It's cheap, weighs little, and packs nicely. When you put it out, it makes a good-sized 24" by 30" surface you can put right in the center of the table between you and all of your players.

You can draw anything you want on this surface. You can sketch out the town in which the PCs explore. You can draw a strange glyph or symbol they saw on a wall. You can write down the stats for monsters so everyone knows what they have to roll to hit them or how much damage those monsters have already taken. If you're not into using 3x5 cards for simple initiative you can write out the initiative list on the mat so everyone can see who is up and who is next.

Though the tendency is to draw top-view maps, you can easily draw the front of a castle or the side of a cliff full of caves. You can sketch out a huge statue the PCs are attempting to scale. If you're particularly skilled, you can draw three-quarter views or cut-away drawings to give players a different point of view.

There's no limit to what you can draw or write on these things but, because we're used to using them as tactical maps, we tend not to think that way. While tactical maps are the obvious intent, there's a lot more we can do with these wonderful mats.

I love the Pathfinder flip mat and I think the mat and some dry-erase markers are the best solution for running combat in D&D.

I come to this conclusion after much thought and experimentation which I'll describe more throughout this article. My conclusion comes down to the following reasons:

What problems will DMs face who focus on a flip mat and sketches in their D&D games?

We'll talk more about these ideas throughout this article. 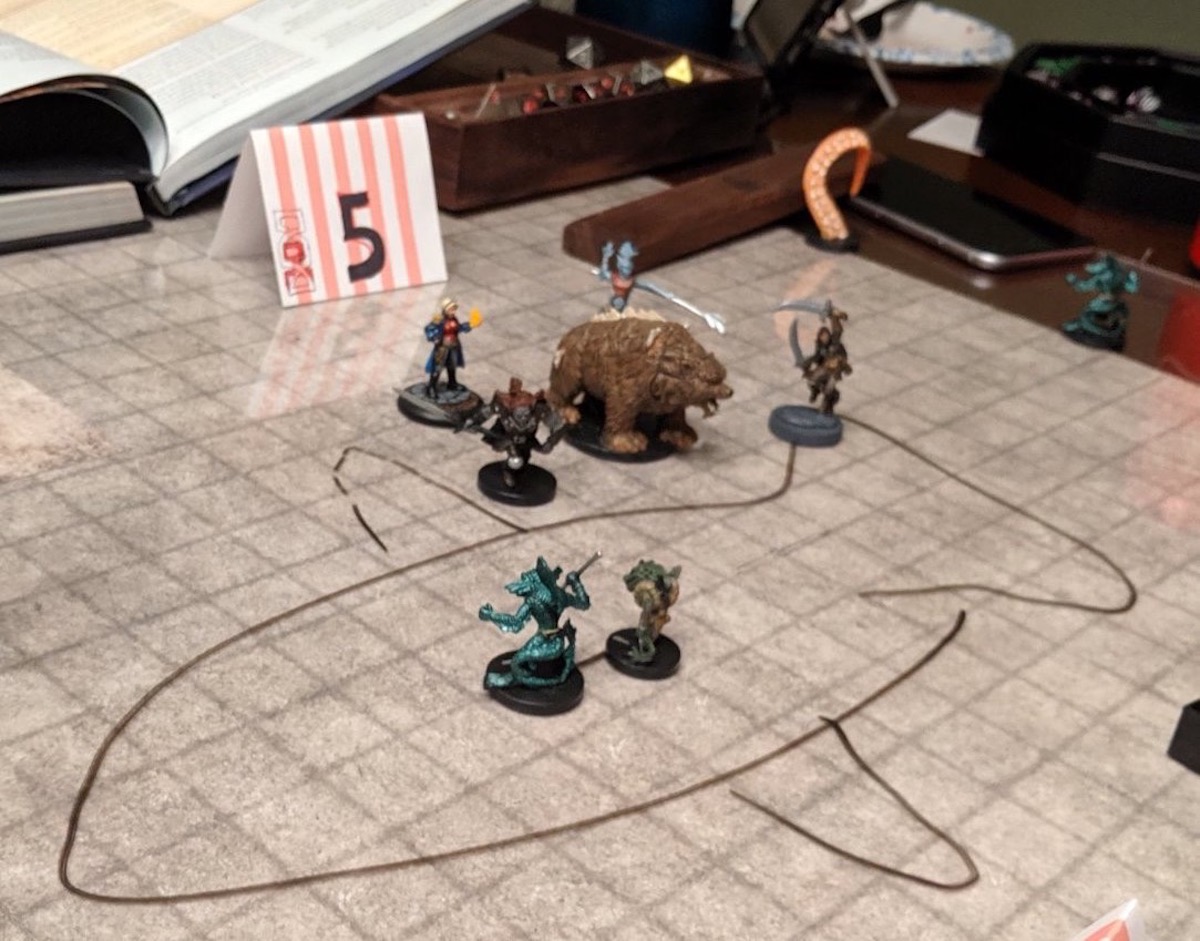 With the flip-mat as our primary tool for visually representing things in our game, particularly combat, we simply draw everything. Think of it like drawing football plays. You draw the environment. You jot down letters or numbers to represent monsters and you either draw or represent characters with miniatures or tokens as needed.

We're aiming to keep things fast, using loose sketches instead of detailed lairs. If a detailed tactical battle is what we need (and we shouldn't need such a thing very often), we're better off either pre-drawing the map or printing one out on a big sheet of paper. Most of the time a flip mat and markers are all we'll need.

If you want to get better at drawing maps, this Map-Fu article by Chris Perkins is a great tutorial for drawing interesting features on a battle map.

Let's get back into the advantages for using a flip-mat and markers instead of more detailed and expensive solutions.

D&D has an incredibly wide range of potential costs from zero to nearly infinite (D&D in a French castle anyone? What about donating $41,000 to play D&D with Chris Perkins? We can end up spending as much as we want or as little as we need to play D&D. We can draw out battle environments with a piece of paper and a pencil or fill out a table with a detailed Dwarven Forge setup and dozens of perfect miniatures at a cost that runs into the thousands.

Here's a secret—D&D doesn't get better the more you spend on it. D&D is all about sharing stories with your friends and those stories cost little more than the price of the core books, some pencils, and some dice. You can get away with even less than that if you need.

Your best investments to make your game as fun as possible cost nothing at all. You're far better off spending time understanding the goals, backgrounds, and motivations of the characters; tailoring the game to suit the desires of the players; than you are spending money on tabletop terrain and miniatures. Such beautiful accessories certainly wow the players, at least initially, but D&D is all about the stories we share in our heads with our friends. Such stories cost nothing and scale infinitely.

Keeping the pace of the action high in D&D is one if our great challenges. This pacing falls apart if we spend a lot of time either drawing detailed maps or setting up big scenarios. Digging out the right miniatures, finding or drawing the right maps; all of this takes time both during preparation and during the game.

One trick to speed things up is to only use the map when you actually need it. Focus on running theater of the mind by default and switch to quick sketches on a map only when positioning is complicated enough to warrant it. This helps you maintain the right speed for the situation, only escalating to more detailed diagrams when you need them.

A blank canvas provides limitless opportunities. Our blank flip mat and a marker let us clarify anything we can't simply describe. Simple diagrams keep most of the in-world situation in our heads where our brains build simulations far more interesting than anything we can model at the table.

A blank map lets us draw anything we want. We can switch the scale out well beyond the typical five-foot squares we're used to. We can draw side-view diagrams or isometric diagrams if we're so inclined. We can draw out weird glyphs and symbols the characters see. A blank mat and some markers have no limits.

When we use pre-printed maps and miniatures, our game loses its flexibility. We're mostly stuck with what we have on hand when it comes to running the game.

We also never seem to have what we need. I'm always a few sahuagin short, even with as many miniatures as I have (and I have a lot). Finding those minis is hard as well. It takes time, either during prep (and thus locking us into whatever I pulled out) or during the game itself in which I pause the action to sort through plastic drawers full of miniatures to find that perfect mummy miniature I painted six years ago.

When you're willing to draw an "SB" on the map to represent the sahuagin baron, you always have the right miniature for the moment.

Miniatures, poster maps, and terrain are hard to transport. Worse, you're stuck with what you have when you bring it with you. Even if you're willing to deviate from what you brought as the story goes in a different direction, you still want to pull the characters back into that area you built up.

The less materials you need to represent the story and the world, the easier it is for you to represent that world when it takes an unexpected turn. A blank flip mat and a marker let you diagram just about any situation that takes place as your game takes new directions.

The lighter our DM kit, the more we focus only on the tools we need to clarify the story, the flexible our game will be.

We can expand out our simple solution here in a couple of ways that may increase the fun of our game and still not either break the bank or our backs with added supplies.

When your players select characters for a longer campaign, it can be worth shopping for their miniature from the unpainted Nolzur's Marvelous Miniature collection by Wizkids and finding the right miniature to fit their character. If you or your player are inclined to paint the miniature, all the better. Doing so is a great way to become more in tune with the character. A good miniature also helps represent what a character looks like to the rest of the players.

If you'd rather use some representation for monsters other than drawing them out on the map, you can use tokens. So far, after trying out many different options, this set of character and monster tokens checks all of the boxes. They're relatively cheap, lightweight, but still substantial enough to sit well on the table. The symbols are easy to see from a distance and pretty enough to be interesting. There are other similar offerings on Etsy that may grab your interest as well. The nice thing about generic monster tokens is that they can represent ANY monster, from a squad of orcs to a pair of death knights and their lich master. You shouldn't need any more tokens than these to share just about any story you can.

Paizo and Wizards of the Coast both make pre-printed map packs as well. If you know a particular location is going to come up, a pre-printed map of that location certainly adds more details which can change how the characters interact with the location. A roadway, forest, tavern, city street, castle, and underground cavern will all likely see use in many RPGs. Of course, your costs go up every time you need a new map and keeping them all on hand will blow up your D&D kit. That said, if you have them available and the timing is right, they can help liven up an encounter.

That said, I have no illusions that such accessories do not make a great game. A great game comes from the work we do to build a world around the character. It comes from the attention we apply to the story of those characters and the enjoyment of our players. It comes from building a toolbox so we can easily improvise interesting situations during the game quickly and with a smile on our faces. For that we need nothing but the most useful tools to bring that joy. A basic flip mat is one of those tools.