Late in 2012 and early 2013 I had the great pleasure to work on Vault of the Dracolich with Scott Fitzgerald Gray and Teos Abadia. I had also discussed Teos's work on the Ashes of Athas living campaign. One element from my conversations with Teos has stuck with me that I hadn't really considered before. Teos likes things complicated. Vault of the Dracolich has some definitely complicated pieces to it. So do some of the bigger encounters in Ashes of Athas. Teos taught me that people like things to get complicated. As a guy who focuses much of his life on making things simpler, this really changed my perspective. Thinking about it, though, it makes a lot of sense.

A psychologist named Mihaly Csikszentmihalyi originally came up with the idea of flow. In his description, flow is the feeling we get when we lose ourselves in activities we're really good at and really enjoy doing. Likely all of us have felt this at points in our lives. Flow can be identified when we lose track of time, when we seem to stop thinking completely and just fall into whatever we're doing, and when we feel great doing it. You might imagine Tiger Woods on the golf course or Michael Jordan shooting hoops or Don Draper drinking himself silly and sleeping with the all the wrong people.

According to Mihly Cskszentmihlyi, flow grows along two spectrums: challenge and expertise. You can plot this out on a very simple graph. 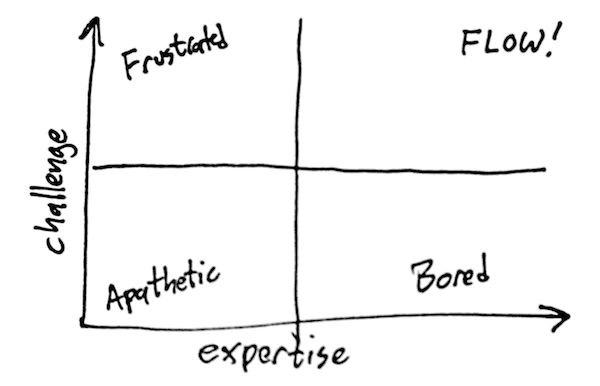 The higher the challenge, the more engaged we are to succeed. The higher our skill level, the better able we are to meet the challenge. If we're overly challenged, we get frustrated. If we're too good at what we're doing, we get bored. If both challenge and expertise are low, we're indifferent.

If both expertise and challenge are high, however, we reach flow. We hit that euphoric state in which we're fully engaged in what we're doing, we lose ourselves in it, and the output is fantastic.

In June 2012 Michael Mallen, the Id DM, interviewed legendary RPG developer Monte Cook. In this interview, Monte said something interesting about the development of D&D 3.5:

For 3rd Edition D&D, we decided that "system mastery" would be a built-in reward. This is the idea that people who play the game longer figure out better choices than a brand new player, and so the old veteran around the table feels rewarded. Some people hate the idea of system mastery, though, so it's not right for every game. However, one could also observe that it's simply the other people around the table feeling punishedglass half empty.

I'm taking this quote out of context — it's worth reading the whole interview. What this shows, however, is that players of D&D want to get the same feeling of flow we seek in all things by matching their expertise against the challenge of the system. This is one of the reasons Pathfinder is as popular as it is. Pathfinder is a complex system designed for players with a high level of expertise. If simplicity were the primary goal of an RPG's rules, a game like Pathfinder wouldn't have much of a place.

That's Great, But What About My Game?

Where do you have the options to adjust complexity to match your players' expertise help your game? We have to begin by choosing the right rule-set. If you have a table full of experts who love digging into the rules, a game like Dungeon World may not cut it. For those who love digging deep into the story and matching their own ideas against the challenges found within the story, Dungeon World might be perfect while Pathfinder's 800 page rulebook will just get in the way of that story.

Assuming you have your system chosen, there are a lot of ways to scale the complexity to match your players' expertise. The level of detail in your story should match or slightly exceed your players' ability to get their hands around the whole thing.

Encounter design is an easy way to increase complexity. How many moving parts does your battle have? Are you throwing timed puzzles into the mix? How hard is it to figure out which weapons will work on which monsters? Thinking of a battle as a multi-layered puzzle is a great way to add complexity. Of course, some groups just want to relax and kill some kobolds so don't push things too far.

Some groups might limit the inclusion of player knowledge into a story. If you describe a skeletal robed figure with tiny pinpoints of light in its eye sockets, your players might recognize it as a lich even if their characters have never faced one. Why limit the expertise your players can bring to the table? Let them go ahead and bring their own knowledge into the game and let them explain why their character knows what they know. It might open up entire new story paths you can use later.

Puzzles, villainous plots, mysteries, and historical background are areas in which you can increase or decrease complexity. Your hardest part as a DM will be to judge exactly how complex it should be to match the expertise of your players. Always keep an eye on the body-language of your players to take a quick reading.

When To Simplify and When to Add Complexity

There's still a place for simplicity in our games. Our goal, as lazy dungeon masters is to know where to simplify and where to add complexity. We should always seek to add complexity to the areas that bring the most fun to your game — the areas that will bring our players and ourselves closest to our point of flow. Everything else, everything that can get in the way of this, should be simplified.