With the Harrowing Halls dungeon tile set, Wizards gives us some fun and excellent 3d terrain to spruce up our encounter settings. When designing an encounter, however, it is always worth spending the time to add some environmental effects and, if it makes sense, some terrain powers to get your players moving around and trying out some new tactics outside of their character sheets.

Today we're going to look at six pieces of terrain from the Harrowing Halls set and add both terrain effects and terrain powers to these tiles. These effects and powers will scale from level 1 to level 30 and will hopefully give you some exciting effects to add to this awesome new tile set. 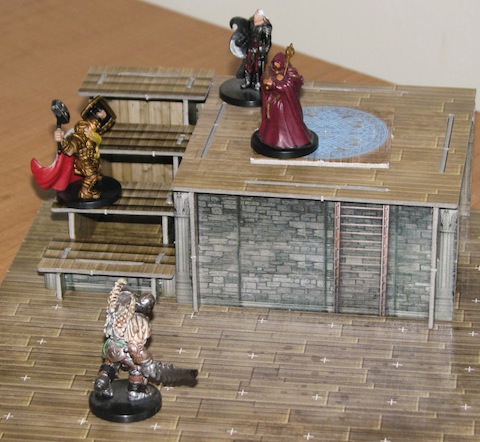 This is a pretty standard magical circle that could be used for a lot of different things. Today we're going to use it to get players moving around the map and, more importantly, to speed up combat. If you want a challenge, start your enemies within the power of the circle and make your players fight for it.

Arcane Circle Terrain Power: Creatures standing within or adjacent to this arcane circle grant combat advantage to all enemies and lose any elemental resistances as arcane power rips through their bodies. However, any attack they make adds +1d6 arcane damage per tier.

As a minor action, an adjacent creature can break the arcane ritual with a hard DC arcane or religion check (use DMG2 page 65) and perform the following terrain power. Failure in this DC results in Low / Normal damage from the DMG2 page 65.

Single Use TerrainBreaking the Circle

With wanton destruction in your heart, you break the arcane circle creating an explosion of arcane energy.

Hit: 2d6 + one-half level damage and the target loses all resistances until the end of the encounter.

There's nothing like a broken-down rope bridge to remind your players of the only good scene from Indiana Jones and the Temple of Doom. When using this terrain, you probably want to give PCs a good reason to cross the bridge. Likewise, you don't want to make your enemies too smart. Give the PCs a good chance to collapse the bridge on a bunch of enemies in a bit cinematic effect. Here's the terrain effect:

Rickety Bridge: When a creature enters or begins its turn on this broken down bridge they must make a normal DC acrobatics, athletics, dungeoneering, or perception check or fall prone. As a minor action, a creature can cut the bridge sending all of those currently on it into the gorge below:

Single Use TerrainCutting the Bridge

You see terror in your enemies' eyes as you raise your weapon and cut down on the ropes holding the bridge together.

Target: All creatures on the bridge

The Maw of Annihilation 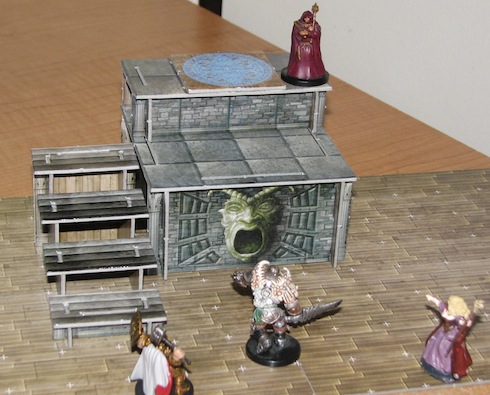 The devil carving with the maw of pure blackness is a throwback to our favorite hated adventure, Tomb of Horrors. This is a very powerful magical wall that draws the life forces of those around it in exchange for a very powerful bonus to crit. This is an extreme example of trading power for damage. Unharnessed, it could unleash the void of the Far Realm upon all of those around it.

Maw of Annihilation: Any creature that enters or begins within the two adjacent squares of the maw of annihilation takes 1d12 damage per tier of negative energy and loses 1 healing surge. As long as they are adjacent, they can critically hit on a 16-20.

As a minor action, an adjacent creature can make a hard DC athletics or endurance check to break the statue containing the maw creating a burst of negative energy:

Single Use TerrainShattering the Maw 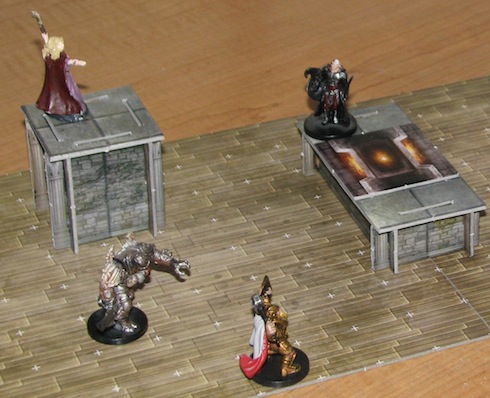 Single Use TerrainTipping the Hell Furnace

Grunting with great exertion, you tip the massive iron Hell Furnace, spilling its white-hot iron onto your foes.

Target: All creatures in blast 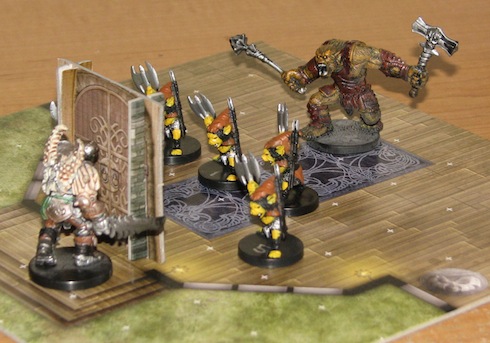 Kicking in the door has long been the sign of the powerhouse adventurer who cares more for cracking heads than he does for parlay and strategy. Why not reward this behavior with a powerful encounter power based on the standing doorway from Harrowing Halls. Here I give you the Exploding Door Kick power:

The ultimate technique of the dungeon delver, you kick in the door with such force that it explodes inward sending shards of metal and wood into those on the other side.

Hit: 1d6+ one-half level damage and the target is pushed 1 and knocked prone.

These are just a few possible terrain powers. Hopefully these can help give you ideas to tune and trick out your own environments with some fun terrain powers.