Nothing can suck the joy out of a game faster than a lack of action. We DMs love our story. We love the worlds we create and the depth of our characters and our villains. We want to explore them, we want them to consider their place in the rich world we have created. Our players? Not as much.

Knowing how to move the game continually forward is one of the best tips a DM can pick up to keep their players entertained and keep their game fun. Today we're going to talk about the importance of moving the action forward and provide a few tips to use in your own game. 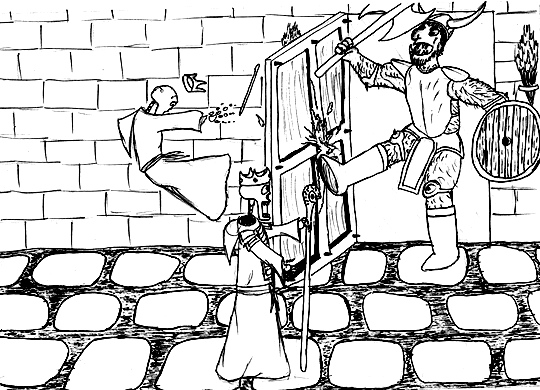 When the game stalls

A game can stall for any number of reasons. Perhaps a particular scene became too detailed, whether it be the description of a trap, an introspective look at the history of the world, or an interaction with an NPC. Such an interaction may be very interesting to a DM and the player having the conversation but the rest may quickly be reaching for their cell phones to call up Twitter.

Indecision can also stall a game. Maybe the players don't quite know where to go. Maybe the choices call for a great deal of debate. Maybe the tactics of combat have delved too far into the minutia and it's time to just roll. Maybe a skill challenge just appears to be dragging on and in without any real feeling.

Many things can stall a game and, as a DM, it's important to read the body language of your group to see if they're all interested in what's going on or they're becoming bored. If they're bored, move things forward.

If you sense the players' interest is beginning to wane, it's time to move things on. Whether it's a round of combat, a skill challenge, or a bit of narrative; always have a way to move things forward. If a player seems to take too long to make a decision, push them towards a particular action they want to take. If the group is spending too much time discussing options, push them to make a choice using in-game motivators like poisonous clouds, a soon-to-be-sacrificed virgin, or an angry noble lord. It's important to give players the opportunity to weigh options, so don't be too quick to cut them off. However, make sure these investigations are providing useful fruit instead of simple circular debate.

Call for a vote

If the group seems stuck in indecision, call for a vote. Whether it's figuring out how to disable a trap, deciding on a path through a dungeon, or making a game-wide decision about the next course of action; let them have a good conversation and then ask them to vote when you feel like all the choices are on the table. Let the majority decide which course of action to take. Calling for a vote takes indecision and turns it into a binary choice — either you do something or you don't. Either you choose one path or you choose another. The quick vote is a powerful tool to keep things moving.

A million articles have already covered combat speed so I'll just reference a few. Including a combat out always helps move combat forward. Reduce table transactions to keep the pace of battle fast. Add in some fast combat powers to your monsters. If a player takes a long time to make a decision, warn them that an adjacent enemy is about to take their indecision as an opportunity to attack and then follow through if they still can't decide.

Take ownership of your material

If you're running a pre-written adventure, remember that you are ultimately responsible for joy of the game — not the module. Never run something you know won't go over well with the group. Skip things, cut things down. Run things differently to match your own enjoyment and for the fun of the group. Skill challenges, for example, may be cut down to a simple series of skill checks, each one leading to a new path. Forget the whole X successes before X failure mechanic - unless that happens to be something the group enjoys.

Don't drop out of the game when making these choices, however. Nothing breaks the experience like saying "there's a whole skill challenge here but we're going to skip it" or "this battle's basically over so we'll just call it here". Always have a way to move things forward without breaking the chain of the narrative.

A holistic view of pacing in your game

Many elements interact to set the pace of your game. Whether it's preparation time by you or the players, actually getting the game started, curbing out-of-game conversations, improving combat speed, helping players choose a course of action; all of these factors result in the overall pace of the game. Only by taking a holistic view of your game can you continually keep the action moving forward and ensure that you and your players are having a great time.