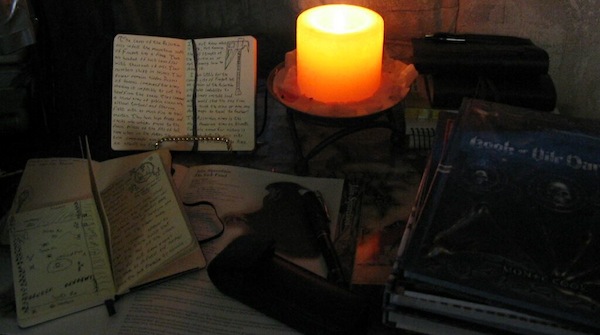 A while ago I posted a tweet containing some counterintuitive D&D advice:

Practice the fine art of not writing down great ideas. If they're really great, they'll come back.

It got a lot of negative feedback on the tweet, including the highly respected Kevin Kulp of Enworld who said:

I could not disagree with this more. Ideas come in so fast, if you don't write down the best ones, you're sunk!

Interestingly enough, I don't even follow my own advice. I carry a Moleskine notebook wherever I go, jotting everything down from future D&D tips to diagrams of future encounter areas.

Yet I still agree with the advice in the original tip. I don't think we need to worry about capturing every little idea in our head. Sometimes its best to leave ideas unpolished and unfinished in our brains. Apparently Stephen King agrees:

I never write ideas down. Because all you do when you write ideas down is kind of immortalize something that should go away. If they're bad ideas, they go away on their own.

Still, Stephen King can have my Moleskine when he pries it from my cold clawing undead fingers. I like writing things down.

Recently in his excellent article, A Dark and Stormy Knight Forgotten Realms creator Ed Greenwood described how he left the background of a mysterious character in his campaign completely open:

Is he a fan of the characters? A foe? A spy working for a secret society, a knightly order, or a priesthood? Or something more sinister, or even more noble?

Frankly, when I first brought him on the scene, I hadn't the faintest.

There's a lot to be said for leaving things unfinished. We dungeon masters like to build stories, but we sometimes forget that our stories aren't built while we sit in front of a computer hammering out paragraphs of flavor text. Our stories are built at the table. We're often not comfortable leaving big gaps in our world. We like to know how things work. We like to know what all the walls look like in that big dungeon we're building, but we don't need to.

The gaps we leave open in our game gives our players room to grow the story as well. We can outsource our ideas into the imaginations of the most powerful computers in the universe — the brains of our players. It means we aren't as invested in our designs as well. We won't push our players imaginations back into the boundaries of the world we'd already built. We simply HAVE no boundaries if we don't bother to fill it in.

The next time you're building out your game ahead of time, leave in the blanks. Get lazy. Take a break and play some Borderlands 2 instead.

Update from a reader

Here's an email I received from David, @1grumpyyoungman on Twitter, who discusses his own experience with these ideas:

I've been DM'ing for about 5 years now and I've had my ups and downs as I'm learning to be a better DM. My players would say that my content was good, but they didn't ever feel like they could just do anything they wanted. Basically I railroaded them too much. Over the past 3 sessions, I have purposefully left gaps in my story and forced myself not to play in an attempt to let the game flow naturally at the table. I've stuck to the 3 act method that I believe Chris Perkins of WotC swears by, and it has done wonders for my game and my group (Note from Mike: Chris Perkins discusses this method in his article Riot Act) I used to take about 2 weeks to plan for the next D&D session, writing 5 pages of notes, and I would be so exhausted at the end of the night because it was like preparing for a big speech! I had a script, and it needed to be followed. Worse yet, all the cool dungeon tiles and maps were making this even more frustrating. I would think to myself "what if they decide to go a different route and completely bypass this map? I don't have anything else planned! What about mini's? Did I bring enough random encounter mini's?". Things like this would put my game into a box and it was very difficult to deliver every time.

Well I've forced myself to write 3 acts, but key is that I've forced myself to keep the notes for the entire act to a paragraph...and more importantly....all of the notes to one single page. Yes I have my printed out monster cards and such for running the encounters, but my campaign and session notes are all on one single page. I rarely look at them! I think the biggest benefit from the 3 act method is that instead of creating points 1, 2, 3, 4, 5, and 6 in your opening act with the innkeeper and goblin patrons...you create points 1 and 6, and leave the rest up to the group. As a DM I know that they come into the bar, and meet a dwarven innkeeper that talks like a pirate and always refers to his first mate standing next to him, even though it's all in his head. I also know that the goblin patrons are there scouting out a rumored thief that has been chatting up the local villagers to find the whereabouts of a secret treasure horde hidden within the cave of a local mountain. So...I just made all that up, but I leave everything else up to the players to tell. What happens? I dunno! The point is that if they decide to look for a secret passage under the barkeep, I have a general layout of the bar and it's surroundings in my head already because I have the boundaries, and not the details of the area. It's easy to come up with stuff on the fly if you have the boundaries.

I think the naysayers to your tip about leaving things unfinished may take your advice as you saying "go unprepared". I would say go prepared, just go in with boundaries in mind. Once you craft the box that your Act lives in, making things up that live in it come so much more naturally. That's what we as the DM's always present the players with, and they come up with cool ideas. Just play off of those and let the good times roll.