If you want to see an example of an adventure written for a new age, read the adventure "Blood and Lightning" in the 13th Age core book. Here's an adventure with no central story thread, no clear enemy, and not even a set of NPCs with whom to interact. At first glance, it looks like it's simply incomplete. The core things we expect when looking at a published adventure are gone. We have a setting, we have a formless magical weapon, we have some monsters, and not much else. 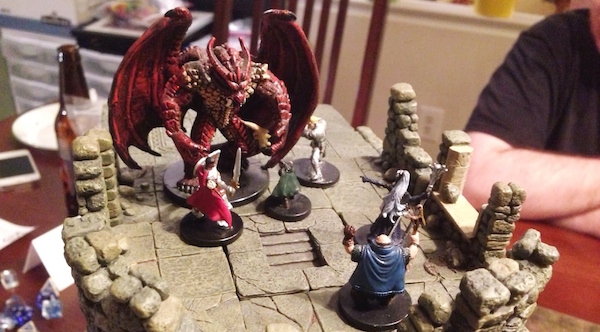 When you look deeper at the adventure and consider it in the context of the rest of 13th Age, this sort of adventure makes more sense. There's no central plot to the adventure because the plot isn't written yet. The plot forms from the alliances of the 13th Age icons (very powerful and influential NPCs) and the PCs. This happens at the table, not during the GM's preparation time. The formless magical weapon becomes defined by the PC who is most likely to wield it. The nameless villain becomes named once you know which enemy faction it is likely to come from. These elements of the game define themselves from the alliances of the PCs that remain unknown until the players are at the table.

That's a really hard idea for us traditional DMs to get our hands around.

Non-linear adventure writing, adventures built around the backgrounds and motivations of PCs, requires we adapt to an entirely new way of designing our adventures. Where we tended to focus our adventures on scenes or story hooks or plot threads; now we focus our adventure design on detailed locations, deep NPCs, and the development of the tools we'll need to build our game as it happens.

Dungeon World is a fine lightweight story-focused game system but it's true strength lies in the advice it offers DMs of any game system. You can glimpse these bits of advice in the GM moves sheet at the end of the Dungeon World Character Sheet PDF. The very first one, "Draw Maps, Leave Blanks", has four very powerful words that can bring us great freedom and great difficulty. Which part of the maps do we include? Which do we leave blank? Those choices are the hardest parts of being a Lazy Dungeon Master. It's an ideal we may never fully achieve. The 13th Age adventure gives us an idea what the authors thought might be useful and what should be omitted for that particular system.

Consider Weathertop in Lord of the Rings. Here we have an ancient watchtower and battle ground from centuries before. It has lots of interesting nooks and crannies and lots of little bits that make it interesting for a battle. Yet our heroes might just as easily held off goblins, orcs, or worgs instead of the ringwraiths. As a generic adventure location, it can serve many purposes.

The tower in "Blood and Lightning" can serve much the same purposes. Regardless of whose tower it is, why the PCs are sent there, or which enemies currently lurk within it, the tower is a useful and interesting location for just about any adventure. Old caves, sunken catacombs, or an abandoned keep can all serve different purposes. This is another reason that flip maps are so useful. However our game's story turns, we can use a flip mat to detail out an adventure location.

NPCs are a bit harder to keep ill-defined, but it isn't impossible. Instead of building out complete characters with deep backgrounds and motivations, we can keep some character tropes and models in mind and use them to potentially fill out NPCs who suddenly find themselves in center stage in the story. We might be tempted to build out our primary villain in great detail before our game has even gotten started, but what if we left the villain's details somewhat vague and began filling them in as the story unfolds.

Keeping things open like this gives us the opportunity to tie villains to the backgrounds of the PCs. As our players develop more details for their PCs, we can begin to build the world off of those ideas instead of trying to find some way to tie them together after the fact.

There are dangers in leaving too much blank. Good open-ended storytelling can be a hell of a ride but, as we've talked about in Breaking Endings, it can easily crash into a wall before it reaches the end. In no place is this more clear than the science fiction series "Battlestar Galactica" which declared in the beginning of every episode "they have a plan". Only they DIDN'T have a plan because the WRITER'S didn't have a plan. The writers had no idea who the final five cylons were until their back was against the wall and they had to pick five. Boy did they pick wrong.

Don't try to pretend you have a big detailed X-files plot arc going on when you actually have nothing at all. You can't fake it.

Instead, make it clear that there IS no plan, that the world moves as it will and the fate of the characters, the NPCs, and the world is at the whims of the group and the fall of the dice.