It's time for another Monster Optimization! This time we're going to dive into the middle of the paragon tier with the Immolith and Inferno Bats. These beasts are both level 15 which would make them a good challenge for a party around level 13 to 15. The Immolith comes from the Monster Manual and the Inferno Bats come from the excellent book, Dungeon Delve. Both can be found in the online D&D Compendium for DDI subscribers.

As always, keep in mind that these Optimized encounters are intended to push your PCs to their limits. These powerful battles should be used sparingly, when you really want to give your players a big challenge. 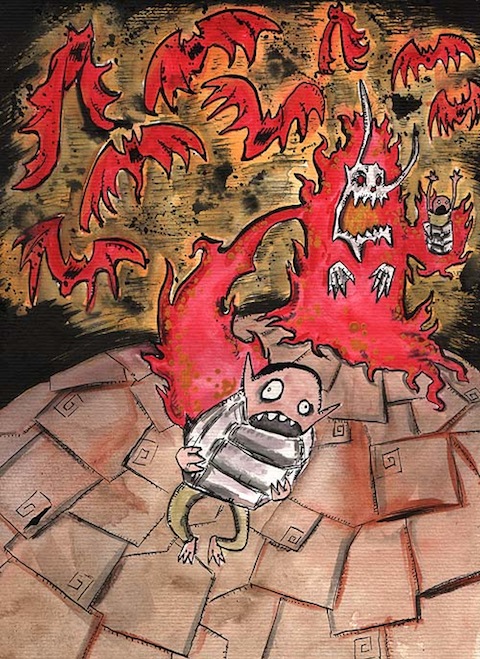 Fire is the keyword for this entire optimization and should likely be the theme to the entire battle. Both the Immolith and the Inferno Bats are chocked full of fire attacks. Normally, at the paragon tier, we might expect that quite a few of our PCs have fire resistance. This would often put a damper on an encounter that's built around fire, but not necessarily here.

The main attack here is the Immolith's Fiery Grab attack which not only grabs a target and drags it within range of the Immolith's 10 fire damage aura, but also removes all resistances to fire the target might have. Now the target is wide open for all of those fire attacks from the Inferno Bats. The Immolith has a very strong fortitude defense which makes it very difficult to break the grab. PCs with acrobatics will have an easier time.

As far as tactics, the Inferno Bats will use fiery swoop to inflict a great number of initial attacks. This will show the cunning Immoliths which PCs have fire resist. Now the Immolith uses Fiery Grab against PCs with fire resist to drag them into its aura and remove the PC's resistances. When the Immolith has pulled the resistant target in to its aura, the fire bats can attack the grabbed target with Inferno Touch inflicting ongoing 10 fire damage on top of the aura. Since they're grabbed, the Inferno Bat has combat advantage as well.

As always, you want to avoid a single lightning-rod monster who gets killed right away by using two Immoliths instead of just one. This way they get twice the opportunity to grab fire resistant PCs and drag them into their fiery embrace.

Lets look at an environment. The Immolith is totally immune to fire so it can stand forever in a pit of lava or some other heated area. This would make it significantly more difficult to approach and attack. So large pits of fire would fit these creatures well. Since there's a lot of grabbing and pulling going on, you probably don't want to make the fire pits too damaging, say 10 fire damage when you begin in it. This would stack with the Immolith's aura and any ongoing damage. You probably want to give some nice raised platforms for your ranged strikers to enjoy.

Infernal Fumes and Jade Flame from the DMG2 would make for some great terrain effects. Infernal Fumes are squares filled with a malevolent gas that moves 4 squares towards packs of 2 or more creatures inflicting 10 fire and poison damage which stacks with just about everything, and dazes the target. It would ignore the inferno bats and immoliths. Jade Flames would be small sections of strange green fire. When inside, the PCs take ongoing 10 radiant damage but resist 20 fire damage. It's a nice damned-if-you-do, damned-if-you-don't sort of choice that PCs will agonize over.

For a fun terrain power, give PCs who stand in the Jade Flame an ability to channel the flame with the following attack:

At Will Terrain PowerJade Flame Jet

While enveloped in the terrible jade flame, you realize you can channel this into a powerful jet of radiant energy.

So there is your optimized nasty fire encounter for mid-paragon tier PCs. A big fiery room full of four to five Inferno Bats and two Immoliths. The Jade Flame and Infernal Fume terrain effects keep your PCs on their toes. It's a nasty encounter sure to put your PCs on the edge.

Like this article? Consider using these links to purchase the Monster Manual 2, or Dungeon Master's Guide 2 or use this link topurchase anything from Amazon.com.