In a recent epic-level game, my party was soon to come up against a Chaos Ship full of Githyanki pirates. I wanted a strong leader for these pirates, someone they would fear and someone who could steer a large Chaos Ship through the worst the elements could muster. 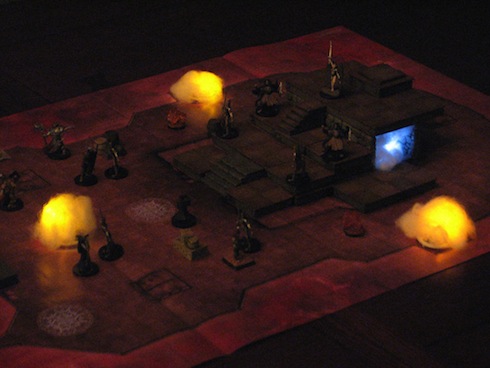 Thus was born, Captain Vlax the Githyanki Psionist. She was small for a Githyanki but her psionic abilities easily made her the best one to steer a massive ship through Chaos. For her design, she had to be a strong telekenetic, throwing barrels, moving the ship around, and throwing the party about. She also had to have some trademark Githyanki elements.

Starting from the beginning, I built her out as a level 24 solo - the same level as the party. I gave her two traits; +3d6 of psychic damage when she has combat advantage, the idea being that she makes a deeper cut with her silver sword against those she is dominating over; and her Telepathic shield, a push that hits bloodied foes.

Her silver sword attack does a lot of damage; something most of my epic solo monsters do. I used the Page 42 damage but picked the limited damage instead of normal to kick the damage high. She would be the only creature the PCs would be fighting so I wanted her to hit hard. Her telekinetic cut was a fun telekinetic power that drew those she wanted close to her for a cut. Mixed with her Psionic Blast, she can push everyone away and then draw in the ones she wanted.

Using Gamefiend's Worldbreaker concept, I gave her two large encounter-changing effects: Hull Shift and Summon Elemental Storm. These let her move the ship around, tossing the PCs on the deck, and summon minions that can further shake things up. The summoning is only usable when bloodied so the game changes when she's below half her hit points.

A bloodied enemy that starts within the aura is pushed 5.

Vlax teleports three targets within 5 to her location and performs one Silver Sword attack against each target.

All Creatures on the boat except Vlax slide 3 to the port (1,2,3) or starboard side (4,5,6). If this would push them over the edge of the ship, they get a saving throw. If they fail the save, they take 4d8+28 elemental storm damage and are knocked prone in the last square they left.

Psionic Feedback - When a target attacks Vlax with a melee attack.

Summon Elemental Storm - While Bloodied, Recharges when all four storms are defeated

At the end of her turn, while bloodied, Vlax summons an elemental storm from each of the teleportation circles. Each elemental storm is of either fire, cold, lightning, or earth. These storms attack after Vlax's turn. They share Vlax's defenses, have speed 6, and a basic melee attack of +28 vs Reflex, and inflict 15 damage either fire, cold, thunder, or untyped damage.

How did she turn out?

My group had a good time fighting Vlax. She didn't get to use the hull shift as much as I wanted to. I think I just forgot about it. Her telekinetic cut kept the group on its toes. Overall she held her own and gave the party a good scar to remember. Like other villains, the PCs ended up hiring her as their own private Chaos captain so now she's on their side. Should make for some fun ahead.