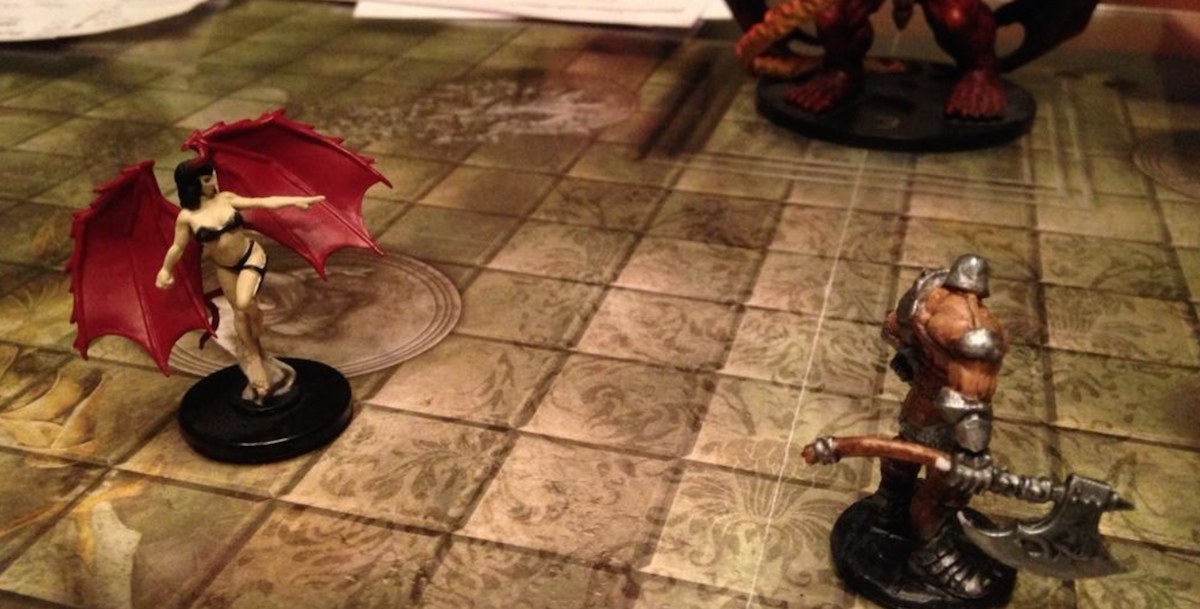 I was unhappy with the contrived ending in our last 13th Age game session in which one PC became a key to unlock a dark and powerful obelisk prison containing the Green, one of the big dragon lords of the Dragon Empire. A whip had whipped out from a portal and stolen the key. That was some bullshit. So I changed it.

I had some trouble getting a full table together for this last game so I decided to run it as more of a single self-contained one-shot adventure instead of part of the story. It was still part of the story but I wanted it to be interesting enough on its own for one of the players who has only been at one previous session.

The game opened up with a description of what truly happened at the end of the previous. That whip stealing the key was but a mental metaphor. What actually happened was more than a mortal mind can grasp, so it created the metaphor. Instead, the entire Pyramid of Set collapsed in on itself with the destruction of the demon lord Gushon and plummeted the PCs into the depths below the crater of the Obelisk. There the PCs found an abyssal hellscape filled with the destroyed and buried remnants of the Moon Elven empire blasted to this other plane by the Moonwreck cataclysm.

I tried to keep to my regular lazy dungeon master preparations. I drew up some quick bullets on what I wanted to run. These included the following:

I also wrote down four secrets. This is the only one that ended up being revealed. I'm keeping the others secret for now.

I also sketched up this map to help me get an idea what the place looked like and to use as a handout for the players. 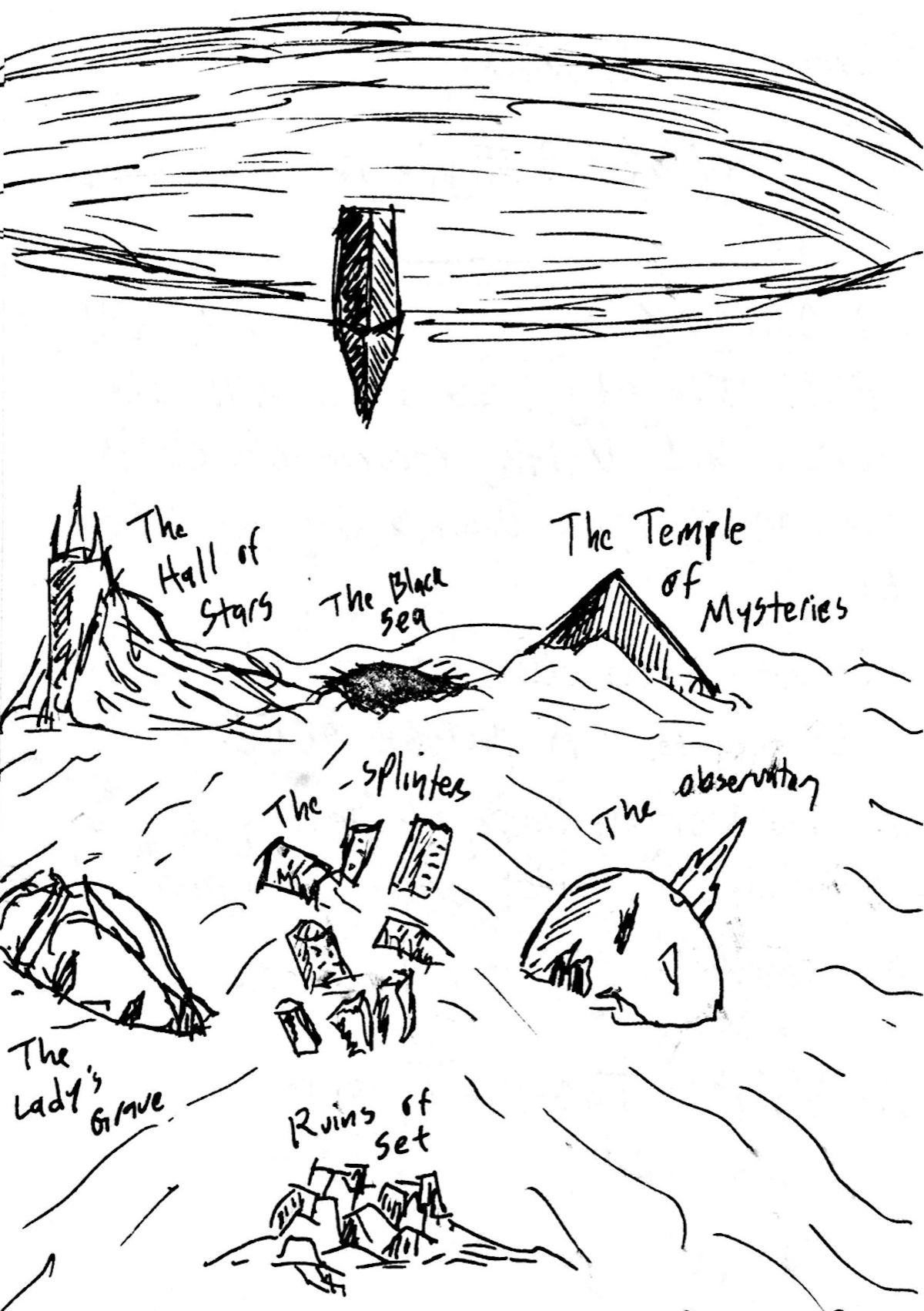 I also wanted to add in a bit of chaos to this plane of the abyss. I wrote up the following 1d20 list for spell use in the plane. Whatever the attack roll on a spell would be checked against this list and this effect was added as well. 1-8 rolls would be mostly detrimental. 9 to 20 rolls would be mostly beneficial. 1s and 20s would be particularly nasty. Here was the list:

It was extreme on the ends, but it was meant to be. Given that this only took place in this one plane of existence, it meant for some swingy fun. This turned out to be the case. The sorcerer in our group rolled critical hits on all three of the primary demons including the Nalfeshnee, Xanesha the Marilith, and Valak the Pit Fiend. It was severe to have an 850 hit point monster drop after a single critical hit but he had already taken a bunch of damage so it really didn't cut things off too quickly and it meant for some fun story.

After a conversation with one of my players, I would convert the slay-on-20 effect to a damage-based effect such as "Inflicts max double damage. If this would kill the target, the target is slain instantly." This is to off-set the feelings that any previous damage is irrelevant and they were just waiting for a natural 20 roll.

Our PCs in this game were level 9 which is roughly the equivalent of level 26 or 27 in D&D 4e. I felt that the PCs power very much represented this. Barbarians were dishing out tons of damage. Casters were dominating Giant Vrocks and sending them out to attack the Marilith. To me, the game definitely has an epic feel. There is a big disparity in the damage output of "strikers" like the wizard, barbarian, and sorcerer and non-strikers like the ranger and bard. My wife, who plays a bard, feels solid in her support role but doesn't feel the same epic feel she felt with her high-level 4e ranger.

Much of 13th Age's epic feel comes with rolling giant handfulls of dice, seeing huge numbers thrown back and forth, and standing toe to toe with miniatures like this guy:

We did use the dice averaging system discussed in the previous game summary. In short, you remove pairs of dice from the equation and 1 + the max on any one die for each pair removed. This turns 9d10+15 into 3d10+48. Much easier to manage. We also had folks use a die-roller for damage which is fine. I don't like using the die roller for d20 rolls, though. Those I want to see rolled on the table.

A Fun Series of Boss Fights

From my discussions with the players, everyone had a good time. We got through three good-sized battles on top of some exploration, NPC discussions, and traveling montages in three hours. It felt epic in scope and yet was still fun to manage.

All of the battles, even the ones with bosses like the Marilith and the Balor included some sidekicks. For Valak the Balor we had two succubi known as "the sisters". They were re-skinned despoiler mages. Xanesha the Marilith had a Vrock sidekick that ended up doing more damage to her than to the party. The lesson of never leaving a monster alone in a fight worked well. Always add some sidekicks.

Next week our band of adventurers returns to the crater of the Obelisk and faces the agents of the Three who now guard the Obelisk. Dragons ahoy!