The following article describes the recent experiences in our home 13th Age game based on the area of Moonwreck. We'll start with a few useful tips in case you want to skip most of the story focus. 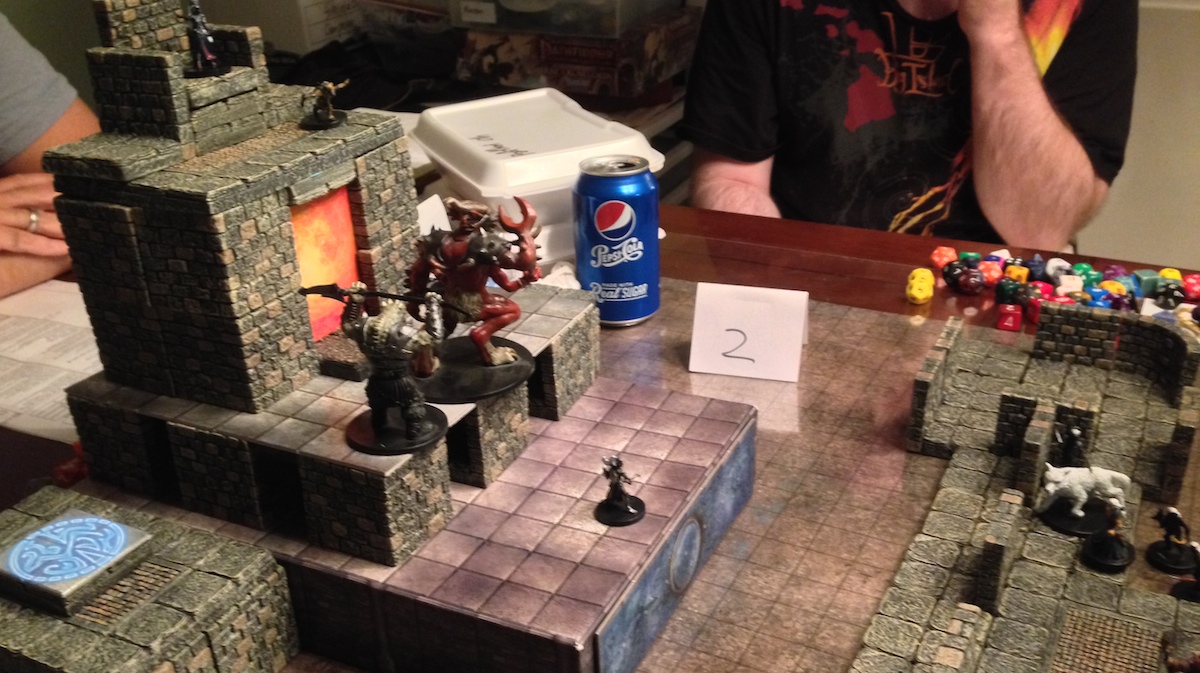 Our Story So Far

In our recent 13th Age campaign, a band of adventurers has traveled across the blasted lands of Moonwreck seeking to gain control over a very powerful construct known as the Obelisk. The Obelisk is the only remaining artifact in the great battle between the former Arch Mage (now the Lich King) and the White, one of the dragon kings now known as the Three. Most recently, our heroes have traveled to the great crater where the final battle took place, killed the Lich King's agent known as Morgos, and stole his floating citadel.

If you want more past game summaries, you can find them in these Google Plus posts that describe previous game sessions. These are listed in chronological order from first to latest:

I began the session in a way I know often goes over poorly—with lots of narrative. But I had so much to tell! Given Icon dice rolls pointing heavily towards the Three and the Great Gold Wyrm, I decided that the Three gained control over the Obelisk. A great quake opened up part of the wall near the PCs new home base and showed them a three huge dragons, black, blue, and red, circling the Obelisk. It's clear at this point that the Cult of the Dark has lost. Meanwhile, an NPC the PCs had saved from arcane imprisonment some time back known as Silvermane arrived at the front door of their new floating citadel.

Some arcane checks also revealed that, while the citadel and its various amenities are under their full control, it lacks the power it needs to really fly and do other cool shit. The only way to get this power is to entrap an extremely powerful creature in a crystal of the Dark. The PCs already possess an empty crystal that Morgos, the previous owner of the citadel, had been experimenting with, perhaps planned as a vessel for Bulvai at one point, the last remaining Moon Elf (oh shit, I forgot to mention anything about Bulvai and no one even asked! What dicks!).

The party did use some of this time to use their gold Icon Dice tokens to pick up some nice flavorful magic items complete with appropriate and interesting flavor that I didn't have to come up with myself.

Silvermane explained to the party that, though the Obelisk was under the control of these three powerful draconic agents of the Three, the key to the Obelisk is still in the hands of the demons known as the Triumvirate of Blood. The citadel, however, can open a portal to the Pyramid of Set where the dark elf allies of the Triumvirate are preparing their own assault on the Obelisk. All the PCs need to do is open up a portal and they will show up at the Pyramid weeks before the dark elves will expect them.

Finally the PCs get into some action. They step through the portal into the caverns near the Pyramid of Set and are assaulted by drow cavalry on spiderback. Though these 9th level double-strength drow knights are statted pretty high, the PCs had no trouble taking them out. If anything, only their hit points really added any length to the fight. That's fine, it was a relatively average fight overall anyway. The level 9 drow are very dependent on the level 6 spider mounts, mounts so weak when compared to the 8th level PCs that they're not worth counting as part of the encounter. Three cavalry on spiderback would have been a better challenge but even the dying drow informed the party "we were just the warmup round". And they were right.

At this point the PCs entered the chamber of the pyramid in all of its glory. The drow high priestess sat atop her large throne, the burning gateway to some hellish domain below her. An assault of two waves of ten level 10 mook drow assault troops attacked while two level 10 drow demonbinders fired off powerful spells. This was a good challenging fight, even when our sorcerer fired off two different spells for over 600 total damage, wiping out both waves of mooks one after the other. Only the two surprise rounds told the players that they better prepare for another ten mooks once the firs wave was dead.

With the mooks and demonbiders slain, the party faced the true challenge. The Glabrezou demon Goushon, the drow high priestess, and her personal bodyguard, a drow blademaster named Celestia Duskblade (thank you random name generator!).

I reskinned a Fire Giant for Celestia Duskblade and used an Ogre Magi for the high priestess. Goushon the Glabrezou and Celestia also got a couple of extra levels that gave Goushon extra attacks and Celestia +6 to her attack rolls. I really like leveling up monsters with these huge bonuses to just one part of their abilities. It makes monsters very interesting and deadly in just the right way by just boosting them up a bit. I don't know how balanced it is, but it makes for a nice unfair change.

Piles and Piles of Dice

It became very clear to all of the players that their new 8th level 13th Age characters roll buckets of dice on attacks. Many of them switched over to the Dice & Dragons app by Micah of Obsidian Portal which worked very well although even I must start to question algorithms when one player rolled three 20s in a row on his D20s. I'm not so sure I like it for d20 rolls but it's fine for damage.

Another way I didn't think of until we were done is the old trick of averaging some amount of the dice. There's some very simple math to help with this. Here are the steps:

Let's say you have a spell that does 14d8 damage. Subtract eight dice from that (leaving 6d8). Add 9 for each pair of dice (max 8 on any one die, plus 1) for a total of 36 (4 pairs x 9). So now you have 6d8+36 damage instead of 14d8. It seems a bit complicated but the player only needs to write down this new damage equation on their sheet.

Remove a number of pairs of dice from your pile. For each pair of dice removed, add the max on any one die + 1.

Now back to our tale.

The PCs battled and defeated the high priestess, the demon, and the swordmaster. It was a whole bunch of tough fights but they persevered. The night was already running late but I had two loose ends to tie up. First, the player playing the dark elf isn't going to be around for the last three sessions of the campaign. Second, I wanted the next session to be in the fiery dimension beyond the gate where Varik the Demon Lord of the Triumvirate has his throne. So, when Goushon died, Axyys, the dark elf, grabbed the key from him and was summarily absorbed into it becoming, himself, the key. Then a flaming whip came out of the portal and pulled it into the fiery gate. "Bullshit!" yelled my loving wife, wise to the moments when my narratives fall away from organic storytelling and into plotted crap.

Hey, no one is perfect. I think I have some interesting places to start the next game that will make it a bit easier to take. With only three sessions (maybe only two) there has to be some bit of railroading. I just consider it breaking endings.