Thoughts on the Neverwinter MMO

On 5 December 2014, Arc Games released the Rise of Tiamat module for the Neverwinter Massive Online Game. With the Tyranny of Dragons campaign in full swing supported by the Hoard of the Dragon Queen and Rise of Tiamat D&D 5th Edition adventures, digging into Neverwinter is a great way to see the storyline of Tiamat's return from a different point of view. 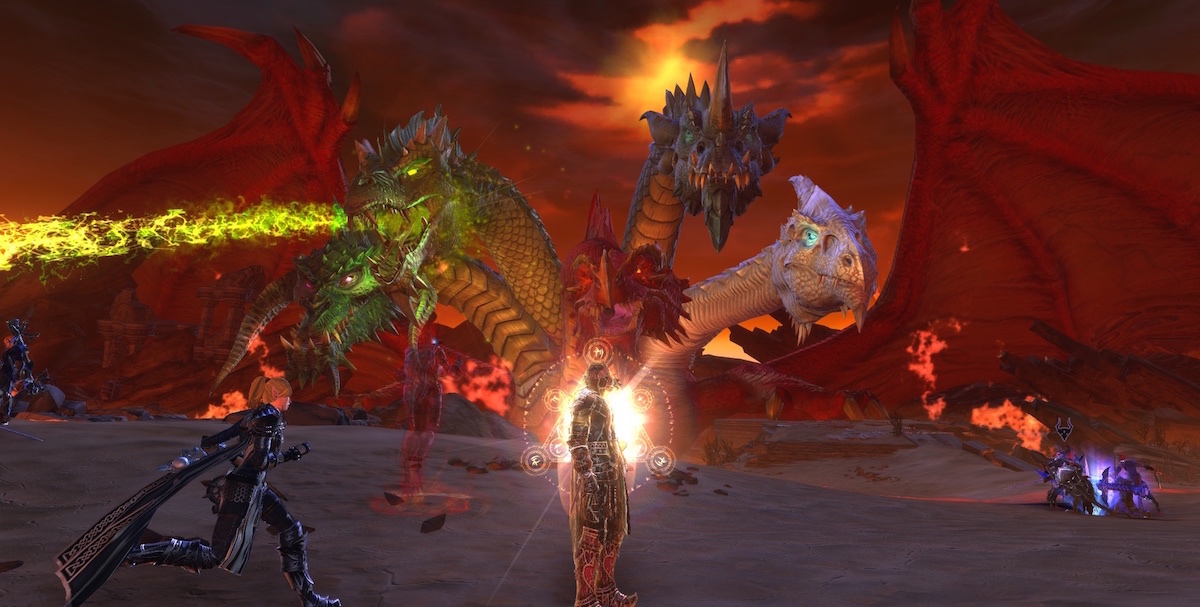 Is This Dungeons and Dragons?

As fans of D&D, we might question how well this game represents Dungeons and Dragons. The game definitely follows MMO trends more than it follows the feeling of traditional D&D. It has 60 levels instead of 20. Damage quickly escalates into the mid 10,000s. Gear follows the common videogame RPG trend of white commons, green uncommons, blue rares, purple epics, and orange legendary items. Every so often you'll see a "+5" on an item but this is largely meaningless next to the mess of statistics an item might have.

Neverwinter is an action RPG. You click your mouse for every swing of your sword or blast of a spell. There's no turns, you just hack away. That said, the game feels very much like a 4th Edition D&D game than any other version of D&D. Considering the common elements 4e had with MMOs, this shouldn't be a surprise.

If you're hoping for something that feels more like traditional D&D, consider playing the recent enhanced editions of Baldur's Gate, Baldur's Gate 2, and Icewind Dale. These follow 2nd Edition D&D rules very closely, with both good and bad effects on the gameplay.

Regardless, Neverwinter's gameplay is engaging enough to keep coming back and playing. The mechanics are simple enough not to overwhelm us but complicated enough that we have a lot of interesting choices in how we fight and how we tune our characters.

Where Neverwinter dives deep into the brand of D&D is through lore. The city of Neverwinter and the story that surrounds it fits well into Forgotten Realms lore. You'll see notable NPCs and common locations around the city and surrounding area. Many of the villains and monsters you fight come right from D&D's deep roots. Everything feels a bit more dangerous in Neverwinter than we typically think in the realms. It would seem there are an infinite number of high level Red Wizards of Thay and Dragon Cultists around largely to ensure a good stock of things to kill for as many players as Neverwinter has.

It Isn't Free, It's Free to PLAY

You can definitely play Neverwinter and never spend a dime. However, if you're willing to put some money into the game, you can make it a lot more convenient to play. Knowing where to get the best value for your dollar can be part of the fun of the game.

If you decide to give Neverwinter a shot, dive in and just enjoy your first 25 levels. Don't spend any money yet. Don't start digging into the auction house. Get a feel for the controls, try out the classes you like, follow Sergeant Knox's quest chains, and enjoy the game. 25 levels is enough time to tell you whether you like this game enough to throw some money its way. Level 25 also isn't hard to reach. Neverwinter levels you fast, even without the fee-based experience booster.

At Level 25, Consider Paying Some Money

At around level 25, you'll likely know whether this game is for you or not. If you find yourself enjoying it and think you'll keep playing, you might consider investing some money into the game. The most important thing you can get is an epic (purple) 110% speed mount. The cheapest of these come from the Zen store and run about $15. Prettier mounts are more expensive but there are no mounts faster than 110% of your base speed.

Don't cheap out and get the 70% mount. While it might seem like a bargain, you'll be happier overall with the 110% mount and will save the money you would have spent on the 70% mount if you later wished you bought the more expensive one.

If you're willing to spend the money, the Guardian of Neverwinter pack is a fantastic deal. You get a 110% mount, a purple companion character usable by all of your PCs, 600,000 astral diamonds, an experience booster, and a bunch of other odds and ends. At $60, it's not cheap, but you get a lot of value out of it and at this point you should have a feeling for whether or not the game is worth it to you.

When you hit 60, Neverwinter changes drastically. There are four modules tuned for level 60 including the Dread Ring, Sharandar, Icewind Dale, and the Rise of Tiamat. The Dread Ring is an awesome campaign against Szass Tam's vile Red Wizards of Thay. Sharandar is a Feywild camp surrounded by Red Caps, spiders, and cyclopses. Icewind Dale is a campaign hunting for black ice in the northern reaches of Spine of the World. We'll dig deep into the Tyranny of Dragons expansion in a moment.

When you 60, the next big benchmark is your gear score. This is where it helps to understand Neverwinter's complicated economy. In short, just about everything can be purchased with Astral Diamonds. Some of it is cheap. Some very expensive. A good set of armor runs about 10,000 ADs a piece. If you bought a horse, you likely have some extra Zen. Spending this on the best set of epic armor you can afford will save you grinding through dungeons. It short circuit's some of the content you might otherwise try, so you'll have to decide if that's the way you want to go.

Many other elements that upgrade level 60 characters also cost ADs. Refinement gems, for example, are best purchased in the auction house. Level 5 enchantments seem to be the sweet spot between value.

This is where it really helps to know how the Neverwinter economy works, what you're willing to spend, and what you really need to enjoy the game.

On the Tyranny of Dragons Campaign

Instead of expansions, Neverwinter has campaigns. These are small expansions with content intended to keep people interested in playing the game at level 60 (which takes about 30 to 40 hours if you tear through quests quickly). The Tyranny of Dragons campaign is Neverwinter's newest campaign out of four. Unlike other modules for Neverwinter, this campaign starts at level 27 instead of level 60. That makes it easier to jump into the game and start enjoying this storyline without having to hammer your way up to the max level. it also gives you a nice boost of daily quests that can help you level faster than you normally would just going through the regular zones.

The storyline takes place as you complete daily quests that fill up a campaign flowchart. Every quest takes a day to complete so there's no great way to short circuit the whole campaign.

The campaign itself is a lot of fun. Members of the Cult of the Dragon are doing all sorts of awful things across numerous areas around Neverwinter. As you level up from 27 to 60 you'll run into more and more of them. You'll even get to participate in some fights against the dragons themselves, a nice touch for a genre that often has low-level (and even high level) characters fighting mundane creatures for mundane rewards.

When you hit 60 and get enough powerful gear (a high-end suit of level 60 gear runs about $3 in Astral Diamonds if you don't feel like grinding), you can reach the Well of Dragons which has its own set of daily quests, two of which are given to you by Elminster himself. The Well of Dragons is a fantastic creepy desert full of Dragon Cultists and their Red Wizard of Thay allies. Occasionally you'll hear the horn of Tiamat and the temple opens to let adventurers face the Queen of Dragons herself.

Playing through the Hoard of the Dragon Queen campaign, it's fun to see events taking place around Neverwinter. The connections between the MMO and the tabletop adventure aren't perfect, mostly due to the difference in styles of games. For example, we might kill two hundred Red Wizards of Thay while working on the Dread Ring campaign, while only one or two Red Wizards might ever enter the tabletop adventure. Certainly a creative GM can use their experiences playing the Neverwinter MMO to add some flavor to the tabletop game. Likewise, knowing more about the overall plot to resurrect Tiamat makes the MMO campaign more interesting.

Neverwinter is a complicated game in a lot of ways. The biggest of these is the economy. There are different currencies for everything in this game and it's easy to get lost in all of it. For the most part, don't worry about it until you hit level 60. You'll level so fast and receive so much gear on your way there that spending the currencies on anything is mostly a waste of time and money.

There are two large currencies worth understanding early on. The first is Zen. Zen is Arc Games's real-world currency. You buy Zen with real world dollars. One Zen is worth roughly one penny (though there are sales sometimes) and you can only buy it in ten dollar increments. This will often leave you with extra Zen left over if you're trying to buy something that isn't exactly $10 or $20. Unsurprisingly, few products in the Zen store can be purchased for an even amount of Zen.

Astral Diamonds are used for some in-game items but most importantly they're the currency for the game's auction house. As a true gauge of player-driven supply and demand, the auction house is one of the best areas to determine the real value of things in game. Since ADs can be purchased by Zen which are purchased by real world dollars, we can do some math and determine the actual dollar price for items in the auction house. As an easy rule of thumb, keep the following formula in your head:

This formula will help you understand how much things really cost and help you compare time, money, and the value of the item.

Is it really worth 20k ADs (about fifty cents) to buy a level 6 enchantment with a + 1% critical bonus? Is it worth spending $5 for a full set of these enchantments? Those are some of the questions worth asking as you dig into Neverwinter's economy game.

In my opinion, there are only a few things worth spending real-world money on:

Neverwinter isn't a bad looking game but it's not exactly optimized for performance either. Depending on your PC's configuration I recommend ensuring that you have v-sync enabled to prevent ugly screen tearing and turn shadows off to get your framerate at a nice solid 60 frames per second. It will make the whole game feel smooth and look vibrant.

Is It Worth Playing?

As a free-to-play game, there's little harm in trying Neverwinter out. You might be done with it in two hours or it might sink its hooks into you. As a game set in Neverwinter and backed by D&D Forgotten Realms lore, it is a fun game to play for us D&D nerds. The gameplay is fun, the stories are cool, the settings are pretty.