Note: This article was originally published by me on the Wizards D&D Community site on 11 March 2010.

There is a certain class of creatures we hold to a higher standard than the others. While kobolds, orcs, and zombies are built to fall to the blades of our player characters, other monsters are built for a different purpose: to terrify. Beholders, liches, elder dragons, demon princes; these creatures shouldn't drop fast and they should scare the heck out of your players. When they're done battling one, they should be bloody and they should be scared of ever facing one again. 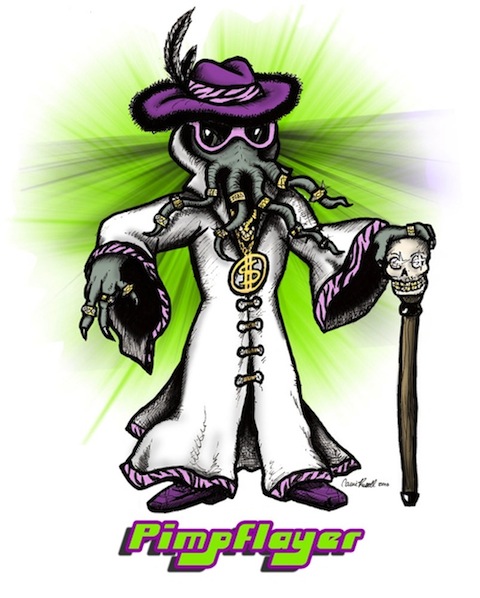 There are few monsters of this variety more terrifying than the mind flayer. When your party sees one, they should grip their swords tighter and their hapless banter should cease. When they're battling them, they should wonder how they ever fell into such a situation. When they're done, they should have nightmares of ever facing one again.

At least that's the goal.

Before we begin, it's important to understand how best to use the stock mind flayer. While its defenses are relatively low, it has one power, "Stalk the Senseless", that requires study. This power makes the mind flayer invisible to any dazed target. This means +5 defenses. This means no opportunity attacks. While the mind flayer can still be marked by your tanks, those tanks will hit a lot less often with that +5 defense assuming the marking tank is dazed.

Keeping PCs dazed is the key, so rule 1 for pimping your mind flayer is to group him with other dazing monsters. The easiest way to do this is to group him with other mind flayers. This serves two purposes. First, one mind flayer gains the advantages of the other. If one dazes folks with a Mind Blast, the other gains the "Stalk the Senseless" ability against those dazed targets. Second, this spreads your party's attacks across multiple Mind Flayers. If you have only one of these tentacled creatures out on the battlefield, he's going to be a lightning rod for attacks and die very quickly. Two, three, or even four mind flayers makes it a lot harder to control or kill them all.

You can also group a mind flayer up with an Umber Hulk, something I discussed in my Monster Optimization: Mind Flayers + Umber Hulks article.

In general, keep an eye out for dazing creatures that stack well with mind flayers.

If you're planning to use a mind flayer as a boss creature, a great idea for a high-heroic boss fight, you're going to need a bit more. Let's pimp this mind flayer.

We start by bumping up a mind flayer infiltrator to an elite, upping hit points, adding +2 to saving throws, and giving him an action point. As we learned in the DMG2, we don't bump defenses anymore.

We're going to turn this mind flayer into a mind flayer assassin, giving him a +2d6 sneak attack bonus. This fits in well with the daze effects he's likely to inflict upon the PCs. We're also going to add a feedback aura. When the mind flayer assassin becomes bloodied, he will gain an an aura 5 that inflicts 5 psychic damage when a creature begins or enters the aura. This represents the mind flayer's loss of psychic control as he begins to fall. We're going to up the recharge of his Mind Blast to 4,5,6 so he can use it more often. Lastly, we'll give him a nice double attack that lets him perform two tentacle attacks upon a single target as a standard action. Finally, to help him escape from a tight spot, we'll give him a shift 5 move action he can use to break away from pesky marking fighters.

Let's take a look at how this turns out: 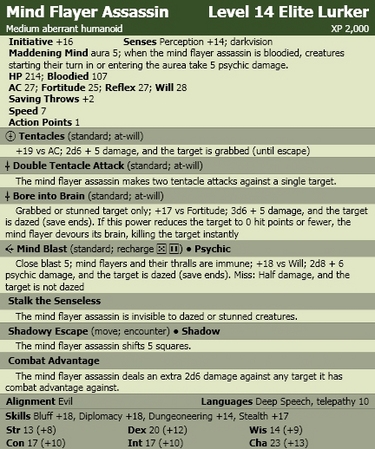 In your powerhouse encounter, you'll want to group our new mind flayer assassin with a couple of regular mind flayer infiltrators to stack up those Mind Blasts. You might also want to throw in some Drow Spiderguard thralls that capitalize off of daze attacks with combat advantage bonuses of +2d6.

This is going to be a very tough battle, so be careful. You'll want to be careful with all of the mind blasts by avoiding dazing the same player over and over. They'll get bored and frustrated quickly.

In the end, you'll have the goal we set out to meet - a mind flayer that will be well remembered by your party and well feared should they ever face another one again.