Back when Fantastic Locations came out we released a one-page campaign worksheet intended to help DMs focus on the characters and have a bit of a cheat sheet at the same time. It's served well but it didn't have everything I wanted in a 5e cheat sheet.

When Return of the Lazy Dungeon Master's Kickstarter ran, we funded the creation of the Lazy DM's Workbook a book intended to help DMs improvise their games as they're playing. It's packed with charts, tables, tools, and ten maps with descriptions all designed so DMs can grab some ideas, let the dice push us in a new direction we might not have thought of on our own, and run an awesome and unique game.

This book is the sort of accessory I always wanted (and now have) in my bag but I'm also a sucker for simplicity. Using a handful of the tables in the Lazy DM's Workbook, I put together a single-page laminated page with a 5e D&D cheat sheet on one side and blank drawing surface on another. I printed it on copper resume paper, cut it down to 8x10 so it fits more nicely in my canvas DM pouch, and laminated it so I can draw on the back of it with dry-erase marker. 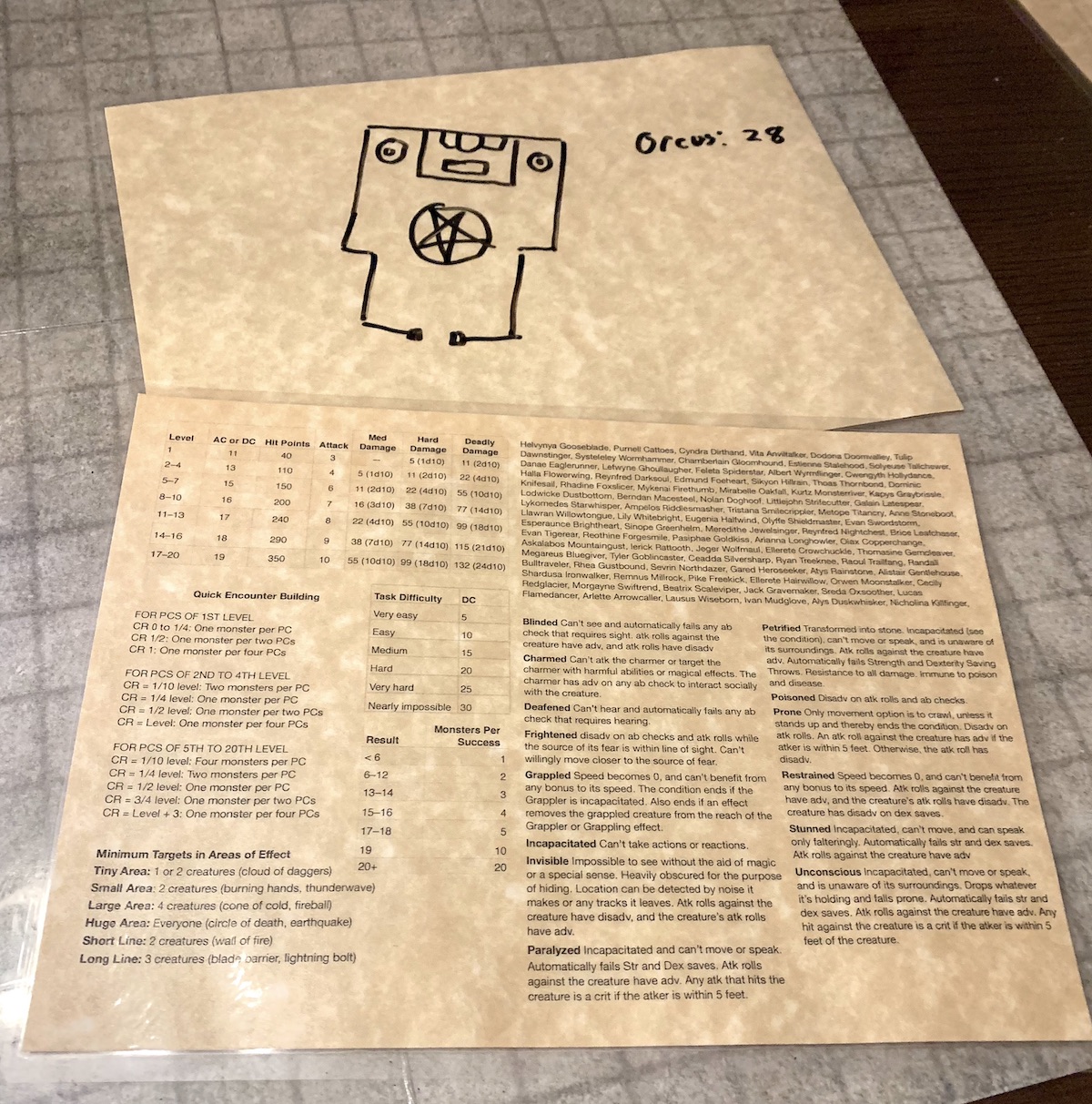 The cheat sheet includes a bunch of references I find most useful at my game. The sections include:

All of this fits on one side of a single sheet of paper that can be cut down to 8" x 10" and laminated for a great 5e DM accessory. 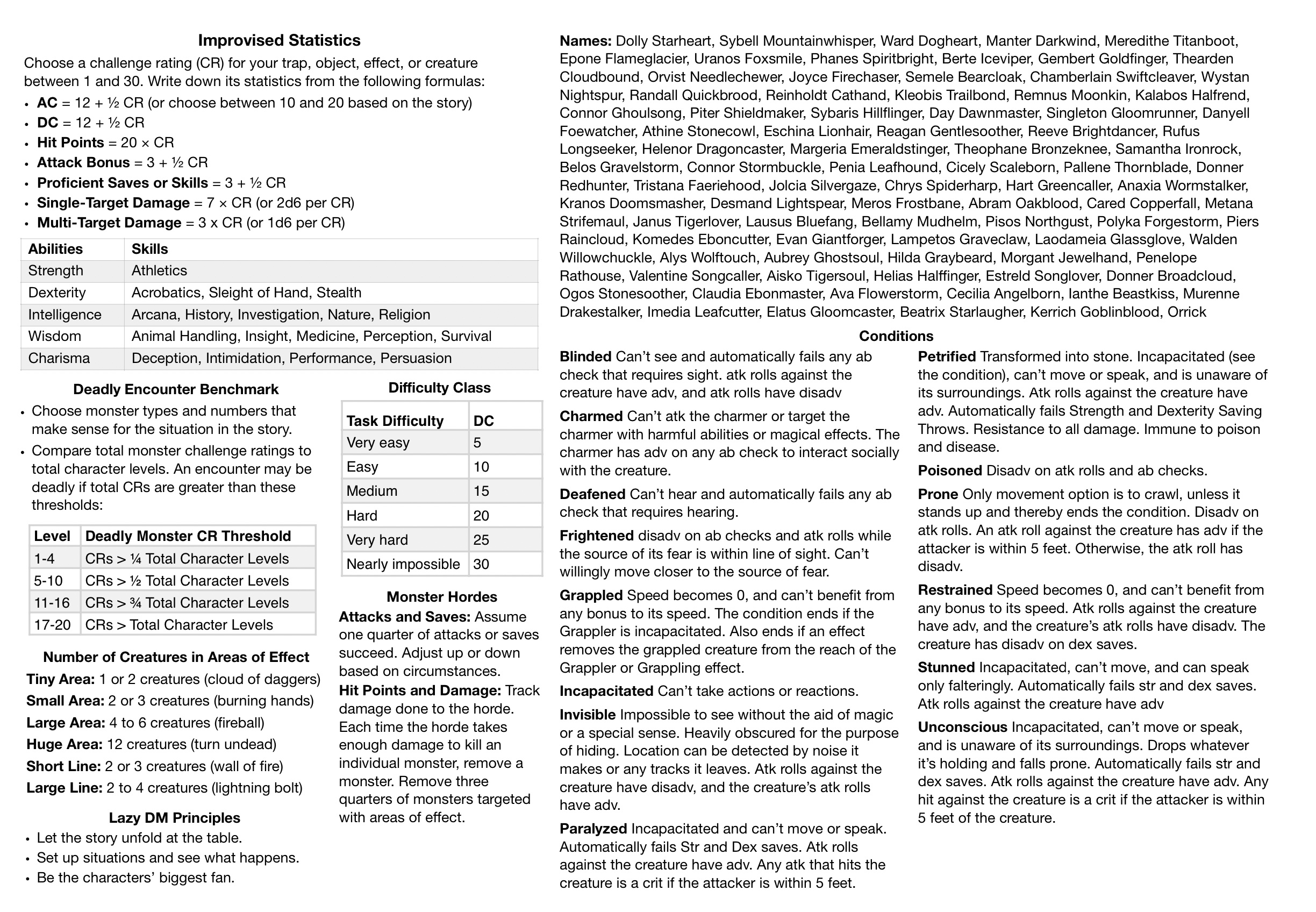 Of all of these tools, the success results for large numbers of monsters is the most difficult to understand. This table is designed to make it easy to adjudicate attacks and saving throws for large groups of monsters.

To use it for attacks, compare the AC of the target to the attack bonus of the monster to come up with a result on a d20. Then cross reference this target number with the number of attacks required for a single attack to hit. Divide the number of attacks by this monsters-per-success result to see how many hit and then multiply the damage of any one attack by the number of successful hits.

For example, if six ogres with an attack bonus of +6 are attacking a fighter with an AC of 20, they need a 14 or better. The chart says that 3 monsters are required for a single one to hit when the target number is 14. Thus, of the six ogres, two will hit for a total of 26 damage.

If eight thugs (each with two attacks of +4) are attacking a wizard with an AC of 18 (including shield), five attacks will hit for a total of 25 damage. Thugs, however, have pack tactics so they should be making all attacks with advantage. Instead, we'll add +4 to each attack which increases it to two attacks required for one success. Thus the wizard gets hit with eight attacks for 40 damage. Ouch!

This chart works for saving throws as well. If a wizard casts a DC 15 fireball on six ogres with a -1 dex saving throw, it takes four ogres for one success thus only one ogre succeeds on the saving throw and the other five take full damage. If you mix this with pooling monster hit points, it is a very effective way to run a lot of monsters.

Again, this is a tricky chart to use but, with a little practice, it's useful for running large numbers of monsters against the characters when such a large number of monsters makes sense for the story. Spend a little time trying to understand it and, when it clicks, you'll find a whole new option for mass combat in your tool kit.

A Powerful Tool for a Lightweight DM Kit

The smaller we keep our DM kits, the more freedom we have to run our game quickly and easily. We need not be constrained by our tools. Instead, our tools should free us to shepherd the stories that happen at the table. This simple tool, an 8x10 laminated sheet with a cheat sheet on one side and a dry-erase writing surface on the other, is intended to simplify our kit and give us the tools we need to run awesome games. I hope you find it as useful as I do.