D&D lead designer Mike Mearls had some interesting things to say about the growth of D&D as we've gone from pre-internet, to forums, to video as a method to discuss and show D&D. Here is a transcript courtesy of Morrus from Enworld.

"I believe that the rise of 3/3.5e and online discussion forums created a massive, fundamental shift in how RPGs were viewed and used. 3e, and then into 4e, D&D was very dense, rules heavy, complicated, and filled with character building options. That was the game. That spread to other RPGs, placing the baseline complexity of the typical RPG at the extreme upper end of what we saw in 80s/90s.

At the same time, online discussion veered heavily toward character optimization and rules details. It was a culture of read and dissect. Both the indie and old school design movements rose in counter to this, focusing much more heavily on actual play at the table. However, the prevailing, forum-based online culture made it very hard to communicate meaningfully about actual play.

That changed when streaming and actual play vids became accessible to the average DM. The culture of actual play had a platform. We can now meaningfully interact based on what we're doing when we play, rather than talk about the stuff we do when we don't play. This is HUGE because it shifts the design convo away from "How do we design for forum discussions?" to "How do we design for play?'

As game designers, we can actually watch how RPGs play and what rules and concepts facilitate the effects we're looking to create. The tension between theoretical discussion vs. actual play has always been a big part of RPG design. I believe at the table ruled for a very long time, swung hard to theory, and now back to table-driven design. Theory is useful, but it has to be used in service to actual, repeatable results in play. And I say this as someone who veered to theory.

So that's why I see Critical Role at GenCon something that can be very good for the hobby and designers. All of this is IMO, based on observations from this specific perch over 16 years. Your mileage may/can/should/will vary.

This ties into the huge success of 5e and the growth of RPGs - people can now learn by watching. The rulebook is not a barrier. We don't learn sports like baseball or soccer by reading the rules - we watch and quickly learn how to play. The rulebook is a reference, like the NBA's rulebook. Comes out only when absolutely needed. Barriers are now gone. Design accordingly." 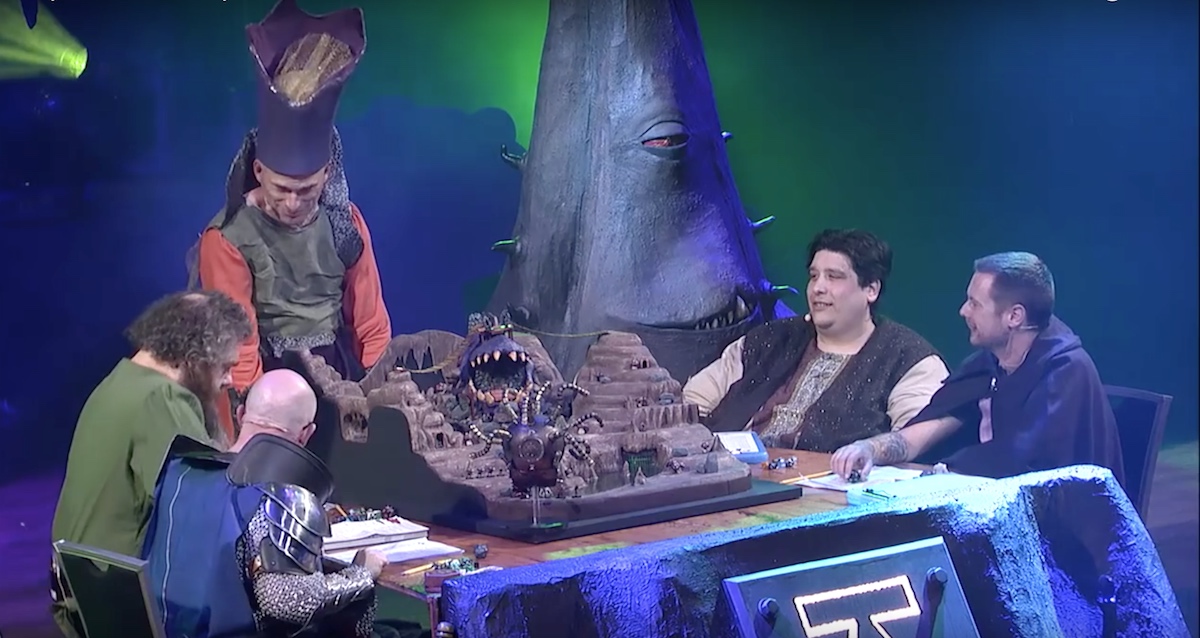 D&D in the Internet Age

This has changed again recently with live-play video and podcasts. Not only can we share experiences through forums, blogs, and social media but now we can actually see what these games look like.

Think about this from the point of view of a new dungeon master. You buy these books, you look at the character sheets, you ponder the maps, but you really have no idea what the actual game is supposed to be like. When and how do you call for skill checks? What do you do when the rules don't cover something? How do you bring excitement and energy to the game? What the hell is all of this "say yes" bullshit you keep reading about?

Dozens of game master guides have written out examples of gameplay in them, describing what players and GMs say during a game but that is a one dimensional look at what a game looks. It's barely helpful.

When you watch Matt Mercer run Critical Role or Force Gray or watch Chris Perkins run the Acquisitions Incorporated games, you get to really see what a game looks like. You get to see the jokes. You get to watch the body language. You can watch how they throw out some of the mechanics to keep the game exciting. We can see what combat looks like without a gridded map. We can watch how DMs build off of the players' ideas when they come up with wacky ideas or even change components of the world themselves.

It's one thing to talk about all of this (as we do here on Sly Flourish) and to actually see it in action.

That's the value of these live-play videos.

Learning Adventures by Watching Them

Live videos aren't for everyone. For one, they're lengthy and time is already short for a lot of people. Reading an article takes about 3 to 5 minutes but watching a live-play video can range from 30 minutes for the short ones to up to four hours for the long ones. Some people have that sort of time and attention available but not all of us. Still, even watching a short video series like the Force Gray series or the Acquisitions Incorporated series can give us a lot of insight into how fantastic DMs run their games. If we have the time, watching a variety of DMs run the game gives us an even wider range of experiences.

Another interesting advantage of these live-play videos is that we might find ourselves mimicking the styles of these excellent DMs without even realizing it. I discovered that, after recently watching Matt Mercer on Force Gray, I was much more enthusiastic when describing the results of spells or attacks. When we watch Chris Perkins, we might take on some of his calm and neutral tone; a tone that removes any misconception of the DM being a competitor to the players and focuses on the DM as the facilitator for the story. The more we watch excellent DMs, the more we might pick up unconsciously along with direct tips and tricks.

No One is Perfect

We can't and shouldn't assume that the DMs we watch are perfect. Even the masters make mistakes from time to time and it's worth taking the time to see what these flaws are and how we might learn from them ourselves. By delving into these live-play videos we can get ideas that help us refine our own style rather than try to mimic one of our favorite DMs directly.

It's important to note that, while these games give DMs a wonderful look at what D&D can look like, it is a poor substitute for understanding the rules of the game. Both Chris Perkins and Matt Mercer run with their own set of houserules that diverge from the rules as written, and it isn't always clear when they are doing so.

These live-play videos go hand in hand with a thorough understanding of the rules themselves but they're not a substitute for learning those rules directly from the books. The videos do show, however, how we can run our game and ignore or change the rules with little determent to the fun of the game. We're better off learning the rules as best as we can before we decide to change them, but its nice to see that changing how critical hits work won't break our games.

A Wonderful Tool for the New Dungeon Master

Back in the 70s and 80s, so few people had any idea how to play Dungeons and Dragons. There are far more stories about how people like Monte Cook and Mike Mearls played the game using the wrong dice or fighting monsters from A to Z. It's amazing this game lasted as long as it did considering how little the rules actually helped us play. Few of us had actual examples of games to learn from. Most had no idea what a game even looked like. We knew this game was magic but we didn't know how to wield it.

Now we know how. We can watch hundreds of different DMs run their actual games. We can share our experiences, take pictures of our battle mats, and share videos of us directly in the moment, having fun with our friends.

For new players, this is priceless. These videos show them what D&D looks like, not by explaining the rules for spell memorization or the limitations of stealth checks, but by showing five people sharing a story, rolling some dice, and having fun. That's what will hook new players on D&D. That is what will really help them out. We're not playing in the dark anymore. We're swimming in a great sea of shared experiences.