We've talked before, at length, about the joys and troubles of organic storytelling. For a quick summary, by focusing a story on the motivations and actions of our player characters and non-playing characters, we build a growing story that evolves and unfolds for all of us at the table. Though it requires we GMs let go of the idea that we're moving the story forward in any particular direction, it also eases our planning and gives us the most valuable question we can ask when planning our game:

"What are the NPCs thinking and doing right now?"

We've also discussed how ending an organic story can be difficult. Many storytellers better than you and I have failed to reach conclusive and well-loved endings. The very nature of organic storytelling seems to be at odds with well-tied-together endings.

There is a technique, however, that seems to be one of the better ways to progress a story. A way that has been successful for organic stories in the past. Battlestar Galactica used it in the middle of their best season. My beloved Breaking Bad used it in the second-to-last episode. Even JK Rowlings used it in the end of Harry Potter. The flash forward. 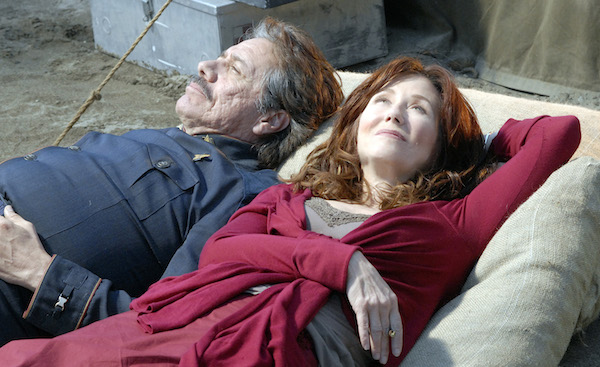 Flashing forward is easy. Simply skip some specified amount of time and return to your organic story. Jump a few months, a year, a few years, even decades or centuries. Hell, jump 3,500 years if it works for you. Frank Herbert did!

Flashing forward lets you jump over dozens or hundreds of steps, reactions between characters, and random events that change things in completely new ways. It gives us a chance to clean the slate and show the full scale reactions of the world based on the events of the past. We get to see how our characters changed and evolved in a single shot. Who got fat? Who lost an eye? Who grew their hair out or became a captain in the local militia? Watching our characters evolve all at once is a fascinating way to watch our imaginations explode.

An Example: The Reign of Orcus, God of Death

A band of epic adventurers faces off against the minions of Orcus as they unravel his plans for multiversal destruction. It is only at the last moment, however, that they realize is true intent to slay the Raven Queen and become the new God of Death himself. They face him just as his power begins to grow and, through his omnipotent might, he slays them all.

We jump forward five years. A hand claws up out of an unmarked grave in the dead earth of the Shadowfell. A being crawls up from the ground along with five others. The heroes return as revenants fueled from the last ounce of power the Raven Queen possessed before her death.

And the world has changed. Orcus, now the God of Death, uses the souls of the dead to fuel his power in a vessel beneath Letherna which Orcus has turned into a massive fortress of bone and black ice.

Our party travels through the cities of the Shadowfell seeing the city crushed under tyrannical lords of Death; liches, vampires and death knights who enslave the living as beasts of burdeon and slaughter. Now the PCs have an entirely new world they must save, a world of shadow.

This is just one example of how a flash forward can reset the game and put an entirely new story into motion. Old NPCs may be revealed, old alliances may come about, but the world and everyone in it is changed. This version uses the dreaded TPK as one way to enact the flash forward, but it is far from the only way.

The Dangers of the Flash Forward

Flash forwards aren't without danger. Depending on how they're handled, you end up locking yourself in to one particular path. Unless you pull off some sort of alternative universe or alternate timeline sort of thing (which can be fun if done correctly), you have to live with the consequences of the reality after the flash forward. If someone died in the time between the present and the flash forward, they are still dead. Whatever fiction you build between those time periods becomes locked in. That is worth considering when you take that leap.

Flashing Forward as a Group

Much of the fun of the flash forward comes from the players. What happened to their characters during the transition? What happened to their favorite NPCs? Let them build out much of the fiction as a TV series writer's room handles it. Try out a bunch of "what if's" and see what sticks, what makes sense, and what makes for the most entertaining story.

The flash forward isn't a perfect storytelling tool but it is one way to take a big leap off of the cliff that we often face at the end of our organic stories. Give it a try.