Chapter 3 of Waterdeep Dragon Heist may be the best chapter in the book. This chapter fits well into the model of adventure design proposed in Return of the Lazy Dungeon Master. It has the ultimate strong start: a fireball exploding in the street outside of Trollskull Manor. It also builds the adventure around the infiltration of a location: Gralhund Villa. These infiltration adventures give players lots of options and push us DMs to heavily improvise the reaction of the villains as the characters make their choices. In my mind, it's the ideal situation for a fantastic adventure. 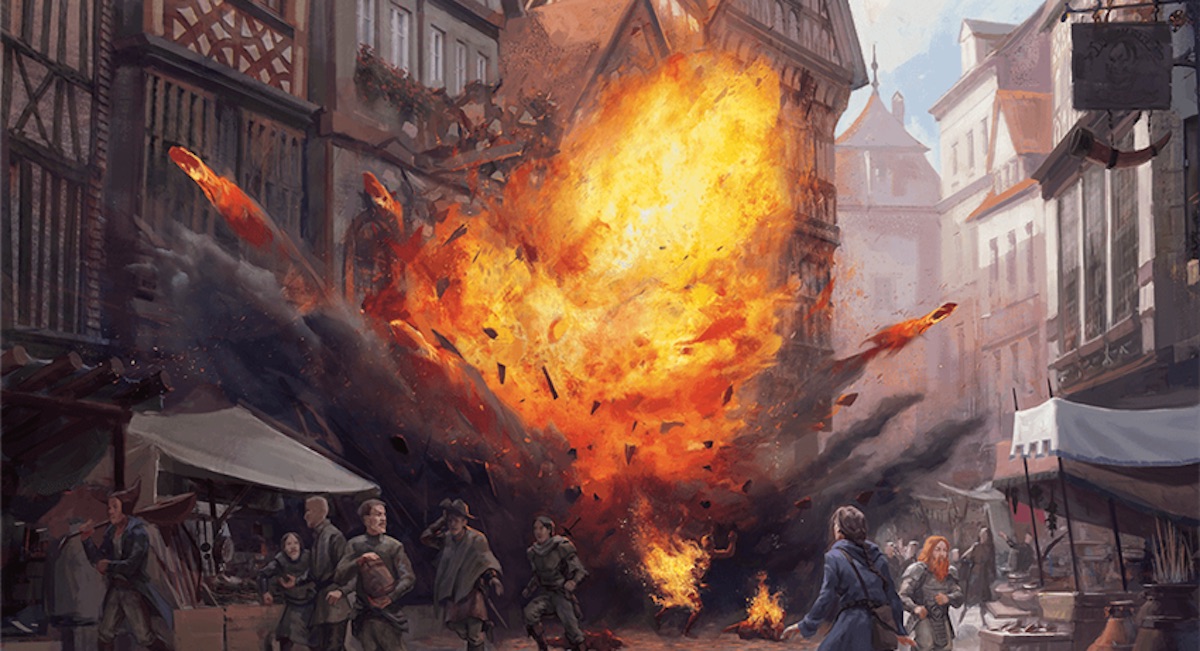 Bad Guys Have Bad Days Too

Chapter 3 begins with a misunderstanding between two groups trying to accomplish the same thing. An agent of Raenar Neverember is bringing the Stone of Golorr to the characters. Agents of House Gralhund have been trailing the gnome and two different groups attack him at the same time. The first is the former Zhentarim assassin Urstul Floxin. The second is a nimblewright sent by the Gralhunds. If the Gralhunds had trusted Floxin to do his job, the characters might never have known that the gnome or the stone existed at all. Instead, the nimblewright screwed up and fireballed the gnome, causing a catastrophe and getting a lot of attention in Trollskull Alley.

Bringing In the Xanathar's Thugs

To complicate the situation we can drop in a handful of Xanathar thugs and warlocks who also happened to be tracking the gnome. Now when the fireball goes off we have a whole bunch of different groups chasing down the stone all at the same time. Floxin gets it first and flees the scene, sending in his own thugs to ward off the Xanathar thugs. That's when the characters get involved. They might track the nimblewright but Floxin is gone as is the stone. Only afterwards, when the situation has cleared up, do the characters learn that the former Zhent assassin got away with the stone.

Tracking the Stone to Gralhund Villa

The book offers some false leads that send the characters on wild goose chases but we can make life a little easier on the characters and drop in some secrets and clues that the Gralhunds are behind the theft of the stone and that it's now at their manor.

When the characters arrive at Gralhund Villa we drop into a great infiltration adventure. We can read ahead on who is where in the villa and let the players decide how they're going to approach it. Urstul Floxin is arguing with the Gralhunds about their stupidity. If the characters overhear it, it will give them a clue that these bad guys have made some bad choices and that they're also working for someone else. It won't be their last bad choices either.

Grandfather Gralhund, a wight, is wandering around in the villa's courtyard as he does every night while the Gralhund children are playing with matches up in their rooms.

To complicate the situation, a band of Xanathar spies and thugs might break into the compound the same time the characters get there with the same plan to steal the stone.

The Gralhunds are former worshippers of Tiamat so we might add a shrine to Tiamat in the basement. These chambers might include an old teleportation gate that Urstul Floxin can use to escape the villa before he's confronted by the characters. This will begin the chase in chapter 4 but with a different spin: instead of a chase, the characters have to track Urstul's movements through the city to find out where he's taking the Stone of Golorr. We'll talk more about converting the chase in chapter 4 into an investigation in our next article on the Waterdeep Dragon Heist.

Setting the Stage for Chapter 4

With Gralhund Villa thoroughy infiltrated, the more arcane-focused characters in the party might use some Intelligence (Arcana) checks to find out where the portal went to. This location becomes the first step in the trail followed in chapter 4. More on that in the future article. In the mean time, enjoy the investigation and the infiltration in chapter 3. Think of it as an excellent model with an interesting hook and a lot of agency for the characters to choose the path they want to take. Of all of the models of adventures, infiltrations are one of the best.