Good dungeon designs include loops, multiple paths, multiple entrances, an asymmetrical design, secret doors, and short cuts. Keep these concepts in mind when choosing dungeon maps for your own games. 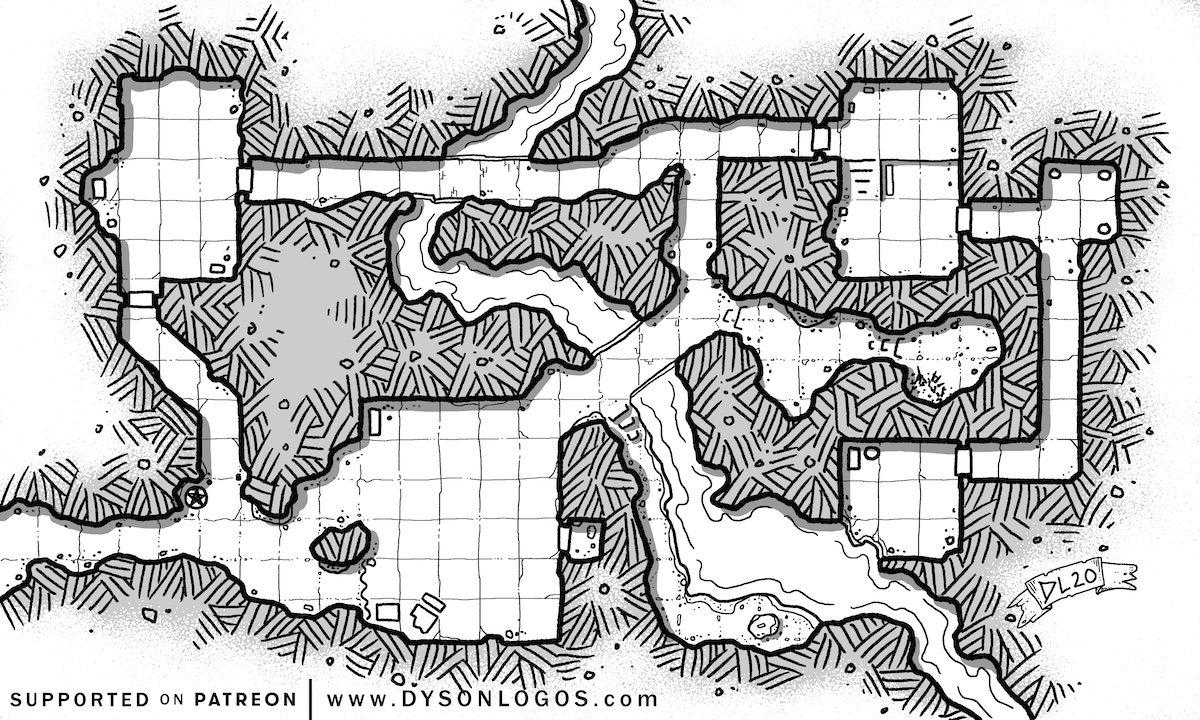 For a video on this topic, see Jaquays-Style Design for D&D Dungeons and Overland Travel.

Justin Alexander at The Alexandrian has an excellent series of articles describing and breaking down the "Jaquays-style" map. The concept comes from the D&D cartographer Jennell Jaquays who did the maps for a number of early D&D adventures. Justin breaks down the principles of Jaquays's maps into a large list of concepts including:

Not every Jaquays-style map includes all these features. These concepts focus on large multi-level maps. For smaller maps, we might focus on:

We might use these concepts to draw our own maps except...

With so many maps available online, there's little need to draw our own. If you like doing it, go with the gods, but I doubt you'll come up with an idea so unique that Dyson hasn't already done something close in Dyson's 1,000+ maps. If you're lazy, it's far easier to grab a map and reconstitute it for your game than it is to draw one from scratch.

A list of good map criteria doesn't just help you draw your own, it helps you identify good maps from bad.

An Example Bad Map — Isle of the Abbey

In 2019 I ran Ghosts of Saltmarsh and loved it except for one adventure: The Isle of the Abbey. I ran this adventure twice for two different groups and it sucked both times. After studying its design, I started to figure out why. You can read my suggestions for running Isle of the Abby to learn more. It wasn't just the design of the dungeon that sucked, but that was a big part of it. Let's look at the map for Isle of the Abbey. 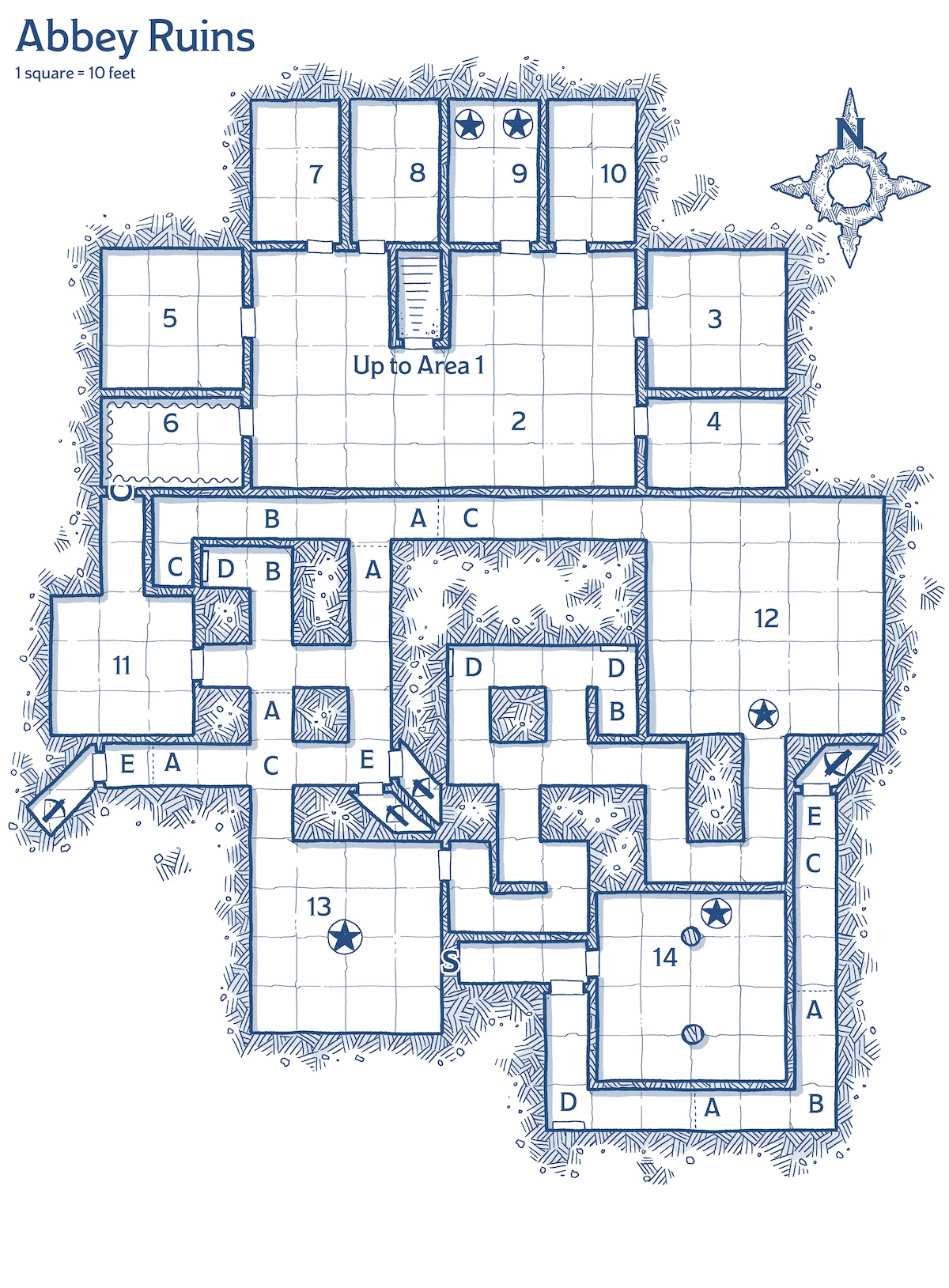 First, this dungeon has one entrance and it leads straight into a big room with eight other rooms one door away. There's no other entrance a group might use to sneak into this place and no way the occupants in those other rooms won't hear you if you start a scrape in the main room.

Even if, somehow, you didn't alert the occupants in the adjacent rooms, going door to door to see what's behind them is boring. Jaquays-style dungeons are designed the way they are because it's entertaining to explore them. They surprise you and delight you when you figure them out. This is why the level design in Dark Souls is so interesting. It's a delight to realize that, after hours of crawling through the ruins of Lordran, a single elevator takes you to your home base.

Continuing with Isle of the Abby, after we clear out the eight rooms surrounding the central room in the first half of the dungeon, we're treated again to a single doorway to get into the rest of the dungeon known as the Winding Way. The Winding Way appears to have some elements we're looking for. It has loops, it's asymmetrical, and it has secret doors. In many cases, though, the loops are too tight. Having a hallway bend around itself in a 15 foot square isn't a loop. It's boring and uselessly complex. This part of the map could be a lot better if it was bigger and more spread out. It could also do with less traps. Winding your way around a long hallway only to find a dead end with a crossbow trap at the end isn't fun. This whole dungeon is a series of downward beats without any upward beats to offset it.

The intent of examining and contrasting Jaquays-style maps with maps like this isn't to turn you into an expert map designer but to help you identify good maps from bad. Luckily for us, Dyson knows their stuff when it comes to map design so we're unlikely to find a truly bad map; only one that likely doesn't fit our need.

Keeping an Eye Out for Great Dungeon Design

By keeping Jaquays-style dungeon design principles in mind, we can better select dungeon maps. Fun dungeon maps include an asymmetric design, multiple entrances, loops, multiple paths, secret doors, and shortcuts. Keep these criteria in mind while hunting down maps for your next D&D game.

This week I posted a couple of YouTube videos on How Many Encounters per Adventuring Day and Session 10 of Lazy DM Prep for Scarlet Citadel.

Each week I record an episode of the Lazy D&D Talk Show in which I talk about all things D&D. Here are last week's topics with timestamped links to the YouTube video:

Also on the Talk Show, I answer questions from Sly Flourish Patreons. Here are last week's questions and answers:

Each week I think about what I learned in my last D&D game and write them up as D&D tips. Here are this week's D&D tips: