Running Ghosts of Saltmarsh Chapter 5, Isle of the Abbey 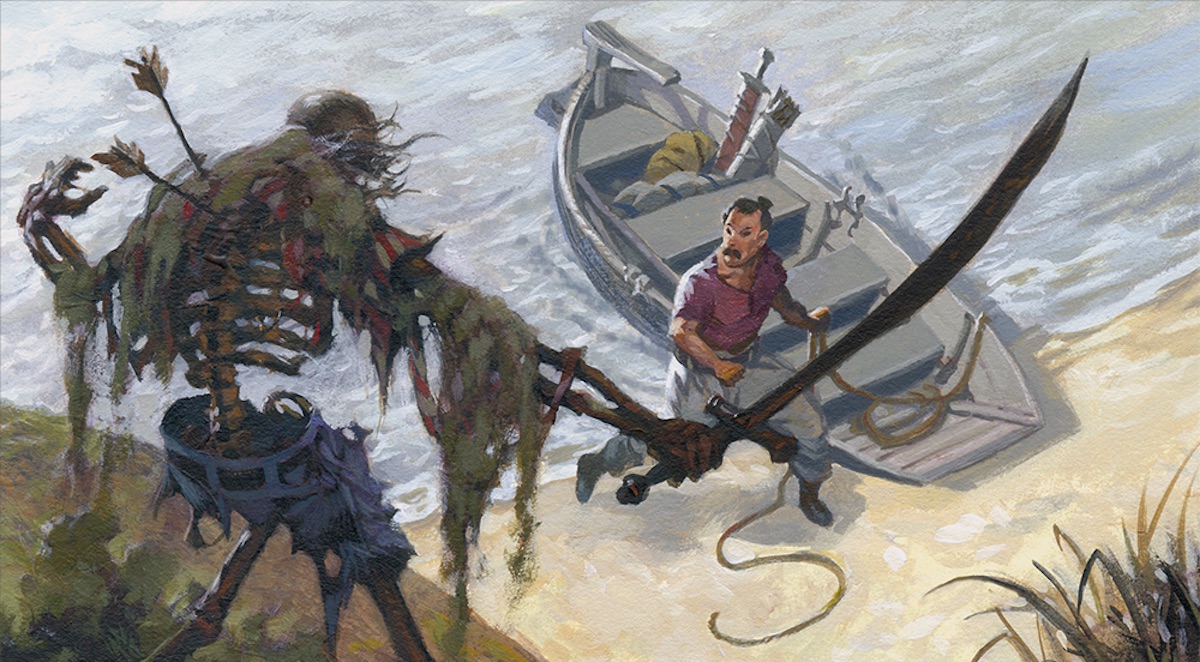 Like Salvage Operation the third adventure in Ghosts of Saltmarsh, Isle of the Abbey is an highly reskinnable adventure. The central hook, the backgrounds of the clerics, and the item they covet in the Winding Way can all be reskinned to suit the campaign we're running.

Here's why. First, the island can get boring once the characters have made it through the skull dunes. Second, the entrance into the abbey is problematic in its design. Third, the winding way can be a boring character-punishing trap-festival filled with a strange menagerie of "CR-appropriate" combat encounters that go on and on and on.

We'll dig into all of these problems and how to fix them throughout the rest of this article. For now, let's look at how we can twist this adventure into one that supports our current story.

The first big reskinnable feature of Isle of the Abbey is the story hook itself. Who wants to build something on the isle and why? Perhaps it's Mannistrad Copperlocks, the head of the dwarven miners, who wants to clear the island so she can build a new watchtower. Maybe it's the council of Saltmarsh who wants to set up the watchtower and lighthouse to look for the sahuagin threat. Maybe it's a secret Scarlet Brotherhood ploy that the characters fall for. Whatever hook sinks deep into the characters works best and we can tune it however we wish. Someone wants to build something on the island for some reason. We get to decide what, for whom, and why.

Whatever hook we set in, we'll want to ensure that the characters become aware that they must stop or defeat the clerics of the abbey in order to accomplish it. Waves of necrotic energy may be continually reanimating the skeletons on the beach; something that must end if our patrons are going to rebuild a tower or lighthouse on the beach. We'll want to reinforce this throughout our running of Isle of the Abbey so that the players never have to ask "why are we doing this again?"

Other than being described as "evil", the clerics in Isle of the Abbey have few details. We can choose what god or gods they follow depending on what fits our story. In my own campaign I turned them into refugee clerics from the Temple of Elemental Evil who came to the abbey to study the Elder Elemental Eye. This ties in nicely with a larger Chained God / Elder Elemental Eye / Tharizdun thread we can string throughout these adventures culminating in the Styes at the end of the book. If you want to connect well with the previous adventure, Salvage Operation, you can tie the clerics to Lolth and fill their abbey with all sorts of regalia of the spider queen.

When we define the theology of the clerics, we'll want to wrap the whole adventure in that lore. We can add giant carvings in stone of the four elemental symbols surrounding a huge symbol of the Elder Elemental Eye. We can give the clerics powers reminiscent of their former elemental bent. We might even pull up those stat blocks for the cultists in Princes of the Apocalypse which fits well in our elemental-themed take on the clerics of the abbey.

The adventure, as written, has very little of this flavor in it already so defining such flavor is up to us. Pay attention to those secrets and clues!

What's In the Treasure Room?

Our final bit of customization for Isle of the Abbey comes with the contents of the abbey's treasure vault. The Winding Way, the main dungeon part of this adventure, guards a treasure vault with oodles of traps and monsters. We'll want to ensure whatever is in that vault is worth the effort.

Perhaps it contains an intelligent mace of disruption or sun blade filled with the lawful good spirit of a planetar who waged war against the very god the clerics worship. Perhaps the clerics have placed the item in an unholy pool that inverts its holy energy into the very waves of necrotic energy roaring across the island. Perhaps only the undead can reach into the pool and take it out; something they're not likely to do. Any living creature reaching into the pool suffers the effects of a finger of death, a final deadly trap to protect this powerful weapon.

We can put any item or items we want in this vault as long as it's important enough to warrant the difficulty of traversing through the Winding Way. The characters should know why they're braving a deathtrap dungeon before they bother to step inside.

Isle of the Abbey is one of the more flawed adventures in Ghosts of Saltmarsh. First, the island itself is bland. The initial incursion to the Skull Dunes is great fun, although high perception checks can get a group through it too quickly. Consider halving the result of a Wisdom (Perception) check to see how many square the characters traverse before running into a pile of skeletons. We can, if we choose, skip the skeletal swarms which are a bit anemic in my opinion with an actual big pile of skeletons. Try 25 skeletons and see how the party fairs. You can roll for them normally, assume a quarter of them hit or save at any given time, or use the mob calculator to run that big pile of skeletons. The skeletal juggernaut is great fun conclusion to their battle on the beach as well.

Once the characters get past the Skull Dunes, it's basically a straight shot to the monastery.

We can make this journey more interesting by flavoring the island based on the background of the clerics. If they're members of the elemental cults, maybe we see huge symbols of the elemental sects or statues to the Elemental Princes themselves. Huge stone idols or great summoning circles or carrion pits filled with sacrificed victims; any of these can bring more flavor to the island. Make them big and make them old.

If you're hard pressed for an idea, drop in an ancient monument to spice things up.

You'll also definitely want to throw in an NPC. Skeen the pirate mentioned in the table of complications can be a good NPC to drop in. Too much combat can get boring and players generally love talking to folks. Skeen can be a great source for some secrets and clues.

Shaking Up the Design of the Abbey

The map for the abbey isn't ideally suited for careful exploration. The abbey's single staircase leads into a main hall surrounded by eight rooms, many of which have occupants who can hear the characters coming. All of the careful details about the NPCs goes out the window when they all come rushing into the central room daggers high.

You might consider changing the configuration of the room into a hallway leading into the main hall with side-halls leading to smaller rooms so the whole thing is less cramped.

If you want an entirely new configuration, try out one of Dyson Logos's maps instead. Many of his maps have far better configurations than the single hall with eight attached rooms. If you do run it as is, consider removing some of the extra characters so it's not nearly as painful to fight through.

The Downward Beats of the Winding Way

In a previous article I talked about the downward beats of dungeons. That article came from my experiences running the Winding Way. This half of the abbey is a festival of traps, tricks, and rooms full of monsters. The monsters are quite a mix too. Three out of the four main encounters in the Winding Way contain "deadly" encounters.

So let's rebuild it into something better. 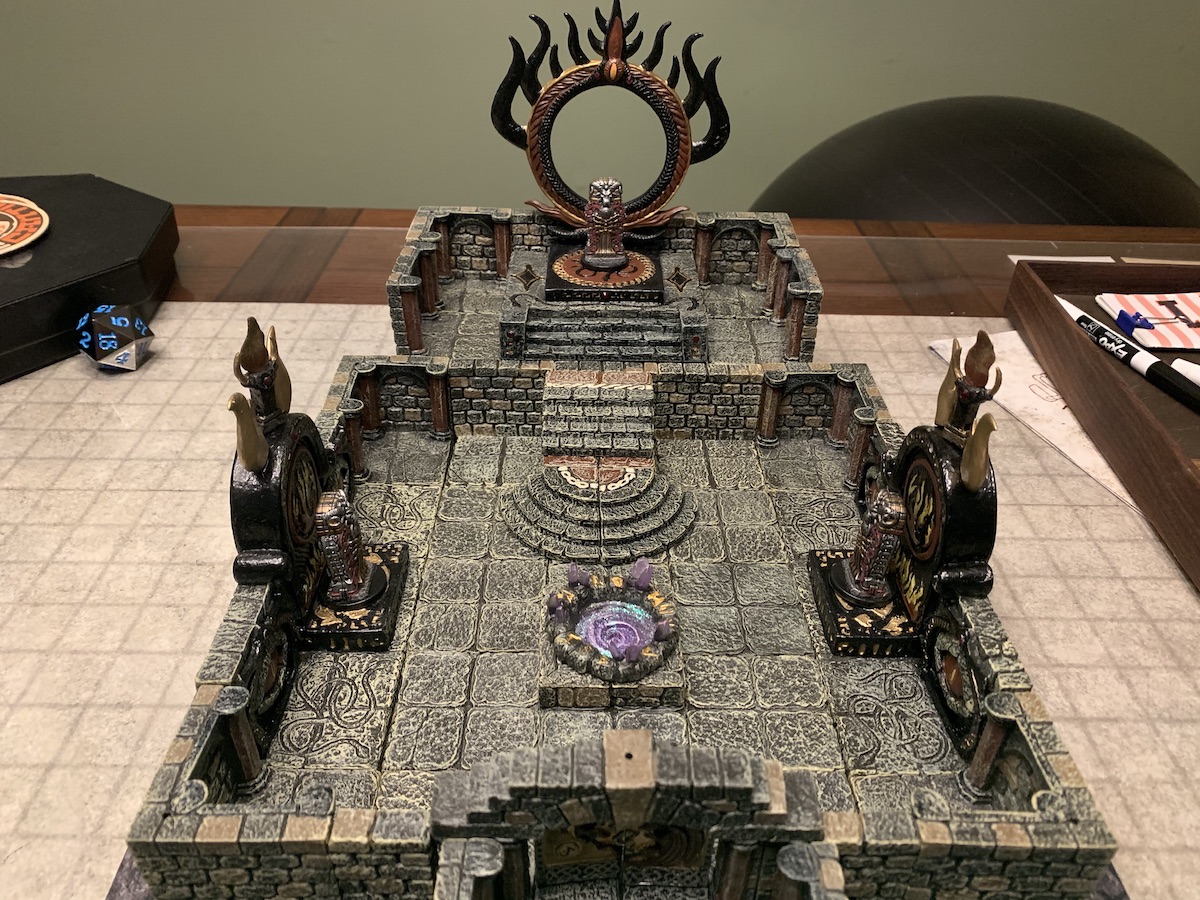 Handwave the traps. If the characters have a passive Wisdom (Perception) of 16 or higher, they'll see most of the traps outright and be able to avoid them. To make this more heroic we can skip over the detailed workflow of trap detection and inform the characters that, due to their keen eyes, they are no mere tomb robbers and manage to avoid many of the deadly traps that would have felled lesser adventurers. We might keep a few traps handy and, if they get boring, we can always grab a random trap from the Lazy DM's Workbook or our handy trap generator and spice them up.

When the characters get into fights and decide to fight out in the hall, we might impose a DC 10 Intelligence check to see if they remember to avoid one of the hallway traps. A fall into a pit isn't out of the question on a failure.

Add harassing specters. We can also grab the specters from room 11 and use them to harass the characters while they navigate the hallway. Specters aren't particularly powerful when compared to 5th level characters but they're really nasty when they can float through walls, hit, and run. Their reasonable dexterity gives them a good chance at gaining surprise and their lifedrain is no fun for anyone at any level. These guys will be quite annoying but a lot of fun at the same time. Just don't overdo it.

Changing up the monsters. We can use some of the monsters listed in the encounters but we'll probably want to mix them up. A bodak might be cool but ogre zombies and ghasts just eat up time. We can decide which rooms have what, perhaps giving each room a theme based on the themes of the clerics in the temple. Maybe each room is an elemental node with a single negative energy room (complete with a bodak) for the node of the Elder Elemental Eye. The vampire statue is pretty cool, as is the crystalline minotaur statue. The two statues in the final treasure vault may be better off as mummies; the original tomb guardians. Even a mummy lord isn't out of the question. These ancient dead priests protect whatever item of great power resides in the final chamber of the Winding Way.

A Scaffold of Adventure