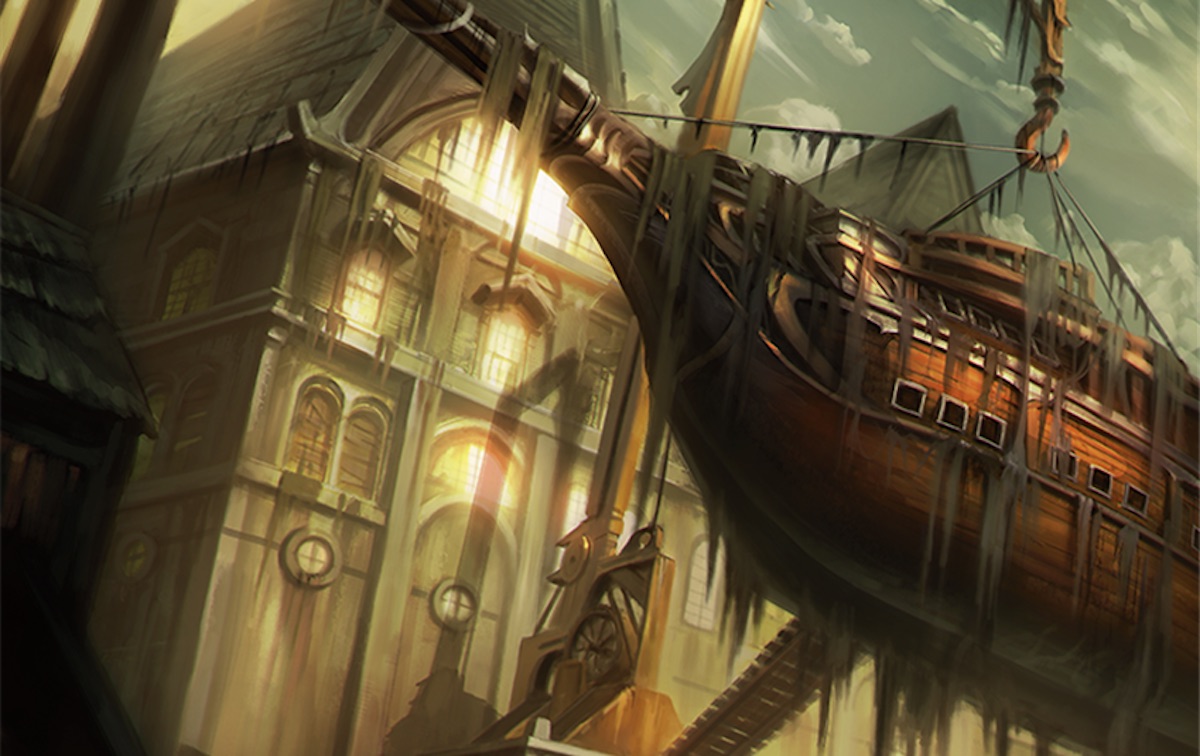 Building On the Tharizdun Campaign Arc

If we're running it as part of a Saltmarsh campaign, however, we'll want to modify it to fit within a story arc that crosses all eight adventures. We'll do so in two ways. First, we're going to connect it to the idea of a great rift in an ancient abolethic city called the Endless Nadir that leads to the abyssal layer of Tharizdun. In our running of The Styes we'll focus on the aboleth who has become infatuated with Tharizdun and has created a cult of twisted monstrosities throughout the decrepit city.

Connecting with the Scarlet Brotherhood

In secret, even to the Scarlet Brotherhood, Mr. Dory might no longer serve the Brotherhood and instead serves the aboleth under the city of the Styes.

The Styes follows a series of dark murders all tied back to a man, recently executed, who claims to have no knowledge of his dark deeds. An investigation leads to one of the four councilmembers of the Styes, Mr. Dory, who, in turn, is connected to the aboleth responsible for much evil in this dark city.

We can run this murder investigation as-is and still tie into a larger storyline. The murder can get some of the key players in front of the characters and take them to the locations that matter. It's a solid focused thread that can bring the characters into the larger plots going on in the Styes.

The Styes feels like it was lifted right out of HP Lovecraft's story The Shadow Over Innsmouth. This story is definitely worth the read when running this adventure. It will load up your brain with inspiration, themes, and setting for the adventure, particularly the idea of a city fallen to a dark religious cult and the physical transformation of humans into fish people.

In our running of the adventure, the Styes can be a dark mirror to the city of Saltmarsh. Where Saltmarsh weathered the fall of the sea princes to the kingdom of Keoland, the Styes never recovered. The pirates and the support they had in the Styes fell and those remaining sought out what comfort they could in the dark shadows of the cold depths. In this case, that was the call of Tharizdun and its prophet, the aboleth Sgothgah.

All of the temples to other gods have fallen into decay. No religions appear above the water here in the Styes. Below, however, lies the temple of Tharizdun.

Running the Aboleth as a False Hydra

There's one major storyline I wish I had done in the two instances in which I ran The Styes. This Goblin Punch article on the False Hydra is the inspiration for this idea.

Sgothgah the aboleth is slowly transforming the people of the Styes into his willing servants: sea spawns, deep scions, skum, and kraken priests. As he does so, they not only lose their bodies but their minds as well. As they lose sense of self, Sgothgah's psychic energies further steal their very existance out of the minds of those who knew the creature. A brother transformed becomes forgotten by their own family as they turn into a deep spawn and swim into the black depths.

For example, Mr. Dory may have once had a son. This son is known to the people of the Styes and even as far as Saltmarsh. Let's say Sgothgah transforms Mr. Dory's son into a sea spawn. When this takes place, no one remembers Mr. Dory's son anymore. Even the characters no longer remember the son. There might be a portrait of the son but no one knows who it is. Maybe it was some visitor who came by years ago. People are more than happy to fill in these lost memories.

As the characters travel around the Styes, they start to see people disappearing all around them and their own memories begin to change.

This is a great chance to play the meta. When a player asks about an NPC who has become transformed by Sgothgah, we tell them that their character has no memory of such a person. When they ask around town, no one recognizes who they're talking about. Even the characters don't remember but the players remember and know something weird is going on. That priest, Father Refrum? Nope, I don't know any priest like that. The temple's been abandoned for years.

If you're not getting it, read this Reddit thread on running a False Hydra. I've not run it myself yet but the next time I'm running an aboleth, I'm definitely trying this out. I wish I had done so in The Styes.

The Temple of Tharizdun

If you're not satisfied with the old wrecked boat as the lair of the aboleth, you might consider adding in a deep half-submerged temple to Tharizdun that has been here under the Styes for hundreds of thousands of years. This Dyson map can work well for the lair and final encounter with Sgothgah. To make the battle more challenging, you might add a number of chuuls along with the aboleth into a chamber that made reaching the aboleth difficult. The aboleth might also have access to the spells of a priest including a spirit weapon and spiritual guardians to make the life of characters even more difficult.

Your Moment for Seaside Horror

The Styes is a perfect adventure to focus on ancient seaside psychological horror. As an homage to Lovecraft's Shadow Over Innsmouth, we can fill our running of The Styes with the mysterious transformation of a people into sea creatures who worship a being beyond mortal minds. By running the aboleth as a memory-stealing terror we can shake up not only the characters but the players as well. What will they think when their own characters begin to lose their memories?