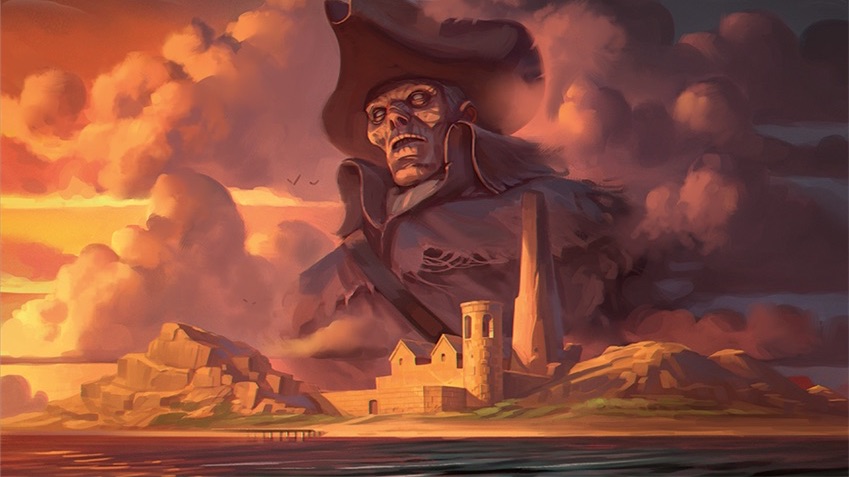 A Potential Conclusion to Ghosts of Saltmarsh

You may have noticed that this article came after the one for The Styes. Though confusing, it was with intent. When running Ghosts of Saltmarsh as a single long campaign, it may work better to bring the Styes in before Tammeraut's Fate and then run Fate as the final conclusion to the whole Ghosts of Saltmarsh campaign.

As a stand-alone adventure, Tammeraut's Fate is built around an island about to be overrun with undead pirates. It includes a new town, some encounters with harpies and a peryton, and the defense of a hermitage on the island. There is an optional foray to go down to the wreckage of the Tammeraut on the bottom of the sea bed where a rift to the abyss pours out the poison of Orcus, demon prince of undeath.

In our version of events, as part of the larger Ghosts of Saltmarsh campaign, we're going to reskin just about all of this adventure; not because it's bad as written but because we want to tie it together with everything that's come before.

Let's look at an alternative series of events and locations to end our Ghosts of Saltmarsh campaign.

In our hacked version of Tammeraut's Fate there is an island out in the black seas that sits on the borders between the world and the abyssal realm of Tharizdun, the Chained God. This island has a huge monolith on it connected to a vast ethereal chain that connects it to Tharizdun's prison world. The ghost ship Tammeraut under the command of the undead Sea Prince Syrgaul, sails around the island along with an avatar of Tharizdun, the juvenile kraken in the Ghosts of Saltmarsh book.

Deep in the sea, a huge rift in the surface of the ocean floor opens wider and wider as the two worlds draw together with the vast chain. The characters must find the island, destroy the monolith, delve through the rift to the other side, and destroy second monolith on the other side of the realm before fleeing back into the world. It's an epic story for the conclusion of our epic game.

We can break the quests for this story down into the following:

Time for a Ship Battle

Tammaraut's Fate is the perfect opportunity to drop in a big ship battle into our Ghosts of Saltmarsh game. We can drop the ghost ship Tammaraut into the strange alien mists that surround the island above the Endless Nadir. We can use the same stat blocks used for the drowned pirates in Tammeraut's Fate but feel free to throw three dozen or so standard zombies into the mix as well. We can use any of the ship maps included in the appendices of Ghosts of Saltmarsh for the Tammeraut and let the players have fun destroying the ship with spells like wall of water and control water.

This is our big chance for an awesome sea battle so let's make the most of it.

The Isle of the Monolith

Out in the black seas lies a primitive isle that few mortals have ever seen and from which none have ever returned. It's an island of twisted organic rock, black spires piercing out into the sky, and a monolith that is clearly formed by conscious design and yet is millions of years old.

For inspiration of this island, read the story Dagon by HP Lovecraft. It's the perfect description of the antediluvian isle with a monolith depicting creatures no mortal has ever seen before. It's the perfect model for our cursed island.

The island itself has hollow spires of volcanic rock that contain a series of caves and tunnels. I reskinned this Dyson map for the location. If the characters sink the Tammeraut, they might hole up here as the undead crew comes ashore and hunts them down. A half-crazed mage might be likewise holed up here along with his apparatus of Kwalish; a good opportunity for some stressful roleplaying and access to a fun vehicle for exploring the Endless Nadir.

Other older and stranger creatures might live on the island. Native chuuls or even worse aberrations might wander freely on the island.

If the characters decide to destroy the monolith directly, they can do so with a series of Strength (Athletics) and Intelligence (Arcana) checks while they defend the hill upon which the monolith sits. Destroying the monolith breaks the chain on this side of the rift but the other must be broken as well to seal the rift completely. 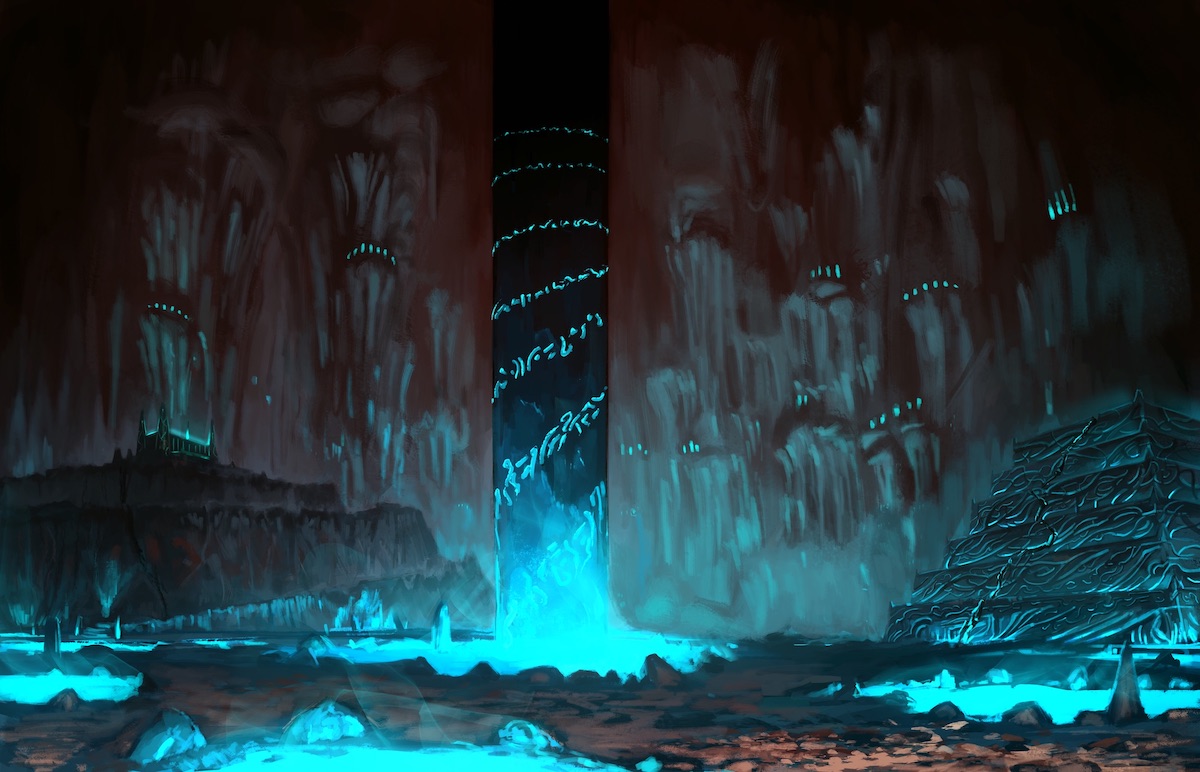 The Endless Nadir has changed hands many times. Originally, once a vast abolethic city, the Endless Nadir has fallen through the hands of sea elves, tritons, and even sahuagin. Now it is abandoned to all but the worst aberrations of the sea as the rift to the prison realm of Tharizdun grows.

We can steal location details of the Endless Nadir from the adventure Chuul in Ruins of the Grendleroot complete with a large abolethic ziggurat, a huge pillar of ancient recordings, and a twisted temple altar. All we have to add is the great rift in the center of the city and a huge ethereal chain leading up to the island above.

At the altar We might put a star spawn larva mage reskinned as a Tharizdun chained guardian along with a pair of star spawn hulks.

And where does that chain lead if we follow it down into the portal?

The Prison of Tharizdun

We can channel our own version of Hellraiser when the characters travel into the prison realm of Tharizdun. You are, of course, able to build out your own version of this dark world yourself but here are some of the key features I threw in mine:

The characters cannot survive long in this world. They must make it to the bone island and destroy the monolith before the chained angels arrive and shred them.

With the monolith destroyed they have only moments to make it back to Oerth or be trapped forever within Tharizdun's dark plane.

Some may not make it back at all.

End of the Threat of the Chained God

With the rift sealed, the remaining characters can return to Saltmarsh knowing that they have ended the threat of the Endless Nadir. Perhaps they might clean up any threats still posed by the Scarlet Brotherhood or even the vampire Xolec. Instead we might leap forward a year and see how our character faired after their long struggle fighting for the safety of Saltmarsh. Such one-year-later montages are my personal favorite way to end a campaign.