Chapter 4 of Ghosts of Saltmarsh, Salvage Operation, is the first chapter that isn't part of the actual Saltmarsh series of adventures beginning with The Sinister Secret of Saltmarsh, and Danger at Dunwater. It's the first adventure that doesn't actually connect to the town of Saltmarsh or the threat of the sahuagin. On the surface, this makes it a more difficult adventure to incorporate into the larger Saltmarsh storyline, assuming you have one. It is, however, an extremely flexible adventure that we can easily use to reinforce the story of Saltmarsh rather than sail away from the story.

Today we're going to talk about modifying Salvage Operation so it can better reinforce the stories we're already exploring in our Saltmarsh campaign. 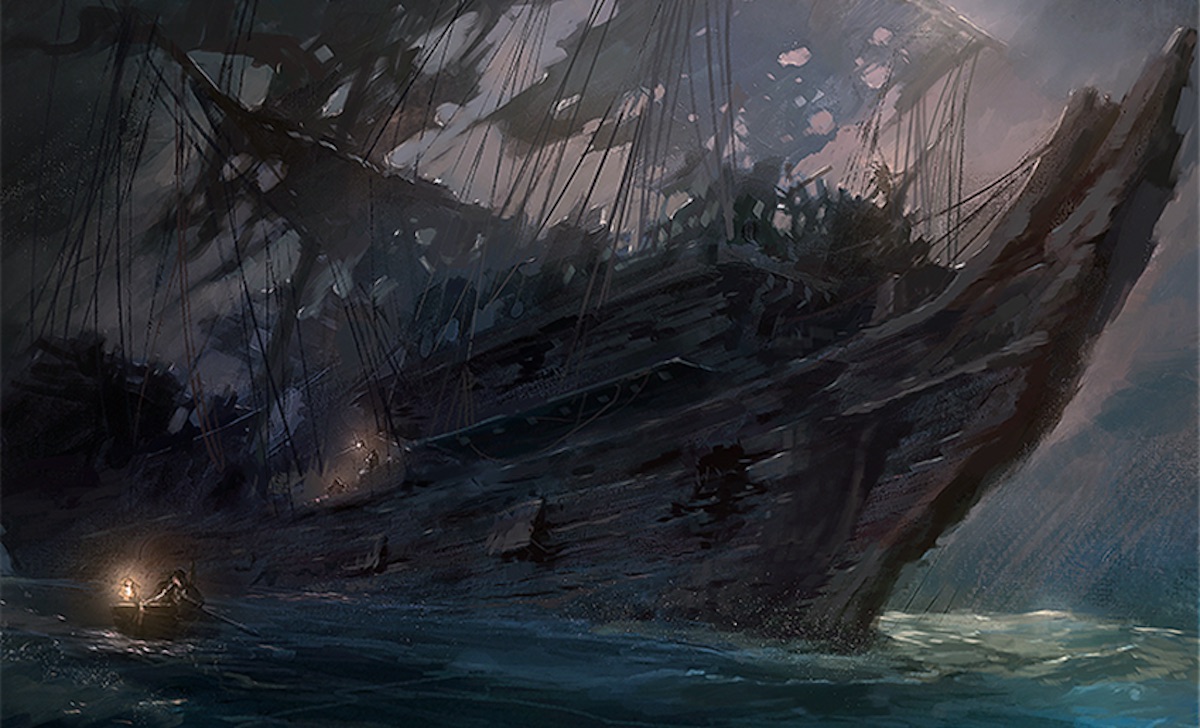 The Adventure Structure of Salvage Operation

Salvage Operation is a refreshingly simple adventure. The characters learn that a ship thought sunk called the Emperor of the Waves is actually still afloat. They're asked to go to the ship and recover a lockbox containing something valuable (one wonderful bit of flexibility). Aboard they find that the ship has actually been taken over by a cult (another bit of flexibility) and is soon under attack by a huge sea horror (a third bit of flexibility). The characters must get on the ship, get the lock box, and escape the ship before being killed by the sea monster. It's a great simple adventure ripe for a lot of modifications to help support our own campaigns.

If we're running Ghosts of Saltmarsh as a larger campaign, we may have included the Scarlet Brotherhood as a secret villain. They're busy figuring out how to take over the Saltmarrsh council, member by member, so they can control Saltmarsh from the shadows. The Brotherhood isn't afraid to kill, kidnap, extort, or bribe their way in as long as they have control.

This mission to recover the lockbox is a great way to reinforce the Brotherhood's plot.

When they return from negotiating with the lizardfolk in Danger at Dunwater, the council will need some time to reach out to the lizardfolk and deliberate about their response. This is a great time for the characters to engage in some downtime. During this downtime, their friend, Anders Solmor, may come to them with urgent business and a request. It would seem, Anders describes, that someone on the council has a secret to hide. Associates of Anders (associates that once worked with his parents who are now both dead) told him that evidence of this secret are stored in a lockbox aboard the Emperor of the Waves. Everyone believed the ship had sunk years ago but apparently it did not. Anders's associates know where the ship might be and, being a mission of some delicacy, Anders trusts the characters to make their way out to the ship and recover the lockbox.

The Cult of the Chained God and the Scarlet Brotherhood

Behind the scenes, a high-ranking member of the Cult of the Chained God, Mr. Dory, is also a member of the Scarlet Brotherhood. Through his connection to Tharizdun, he found the Emperor of the Waves in a dimensional storm near the Endless Nadir. All of this comes from the Chapter 8 adventure The Styes, including Mr. Dory, the Endless Nadir, and the Cult of the Chained God. We're foreshadowing some of that adventure while running this one.

Mr. Dory passed his information on the Emperor of the Waves and its secret to Skerrin Wavechaser, the ranking member of the Scarlet Brotherhood in Saltmarsh who passes the information to Anders Solmor. Anders gives it to the characters.

What secret is within the lockbox? We can change it to whatever suits our needs to move the Scarlet Brotherhood plot forward. In my own game it was evidence that the Emperor of the Waves was a slaving vessel that did business with Eda Oweland. The evidence would have her removed from the council and likely hanged. Earlier, it is possible that Skerran's ruse with Gellen Primewater had him removed from the council as well. That reduces the council from five to three. A kidnapping in the Kingdom of Keoland of Eliander Fireborn's daughter puts the majority of the remaining three councilors in the hands of the Scarlet Brotherhood.

As written, Salvage Operation includes a cult to Lolth but we can just as easily change this cult to the Chained God and tie it closer to the adventure The Styes. The Cult of the Chained God can become another front in our overall Saltmarsh campaign, one that can move forward as the characters engage in the adventures.

We may want to change some of the creatures in Salvage Operation with creatures closer to the aberrations we might see in service of Tharizdun. We might reskin the swarms of spiders, the giant spiders, and the ettercaps into pirate abomination hybrids formed and twisted by Tharizdun's corruption on the island where they landed. Among the papers found in the lockbox might be a journal of their landing on an island and the discovery of a fifty-foot-high obsidian obelisk over a million years old marked with the sign of Tharizdun. This would be an island directly above the huge rift leading to the Endless Nadir.

Krell, the main villain in Salvage Operation, is easily reskinned as well. In my own game, I wanted to give him a connection to one of the characters so I changed him into a triton warlock similar to the triton warlock character in our game, Jamras. Jamras knew Krell and vice versa. Jamras, being a warlock of the Great Old One, is an easy recruit for Krell, so he thinks.

Krell can be easily reskinned into whatever villain best fits the campaign and the backgrounds of the characters. A warlock of Tharizdun fits well but we can just as easily reskin him into any villain that either fits our characters or fits the story.

The giant octopus is likewise reskinnable. This octopus might instead be a giant ink-black whale with the powers of a great old one warlock that killed the parents of one of the characters. It might even be a full-fledged kraken. This is a good opportunity to connect the big environmental monster in this adventure with the one in The Styes.

Finally we come to the chest. As mentioned above, we can put anything in it that drives the story forward. In my own game, some truthful but damaging evidence against one of the council members fit very well. What will the characters do with proof that Eda Oweland sold Saltmarsh citizens into slavery five years ago? How will that tip the scale of the council? What secret organization wants this information to get out and why?

A chest like this is a great gift for the story of our game. We can put anything in it that helps that story move forward.

The real fun of Salvage Operation hits when the giant octopus, or whatever you turned it into, attacks the ship. The ship starts falling apart. The characters start scrambling while the world crashes around them. Do they keep fighting the villain? Do they grab the box and flee? The continuing escalating chaos makes this scene shine. Let things get out of control. Drop new challenges in front of the characters and help them overcome them. Maybe some of the characters can swim but others can't. Maybe others make it into the water only to see a sea of specters from the roaring storm rushing in.

Salvage Operation is one of those perfect small focused adventures with lots of room for us to shape it and prune it into the adventure that best fits our story. With a straight forward storyline and some clear reskinnable areas, we can take the bulk of this adventure and turn it into one tailored perfectly for our own campaign.