When M.T. Black, the DM's Guild best-selling producer, begins to consider adventures he wishes to develop and the titles he wants to use for those adventures, he doesn't sit back in a large leather chair and stare out the window to the beaches of South Whales, Australia until inspiration comes and finds him. M.T. Black uses a series of Javscripts to generate random lists of titles, plots, and seeds. From these random lists he prunes and cultivates until he finds and constructs titles such as Horror in the House of Dagon, the Secret of Skyhold Tower, and the Clockwork Queen. These sound like solid traditional adventure titles yet it took a spark of random inspiration to give them their edge.

I use randomness all the time when I'm creating an adventure. Otherwise I find I'm just slipping back into very comfortable tropes and ideas. Randomness really helps me bring something fresh to the table.

Randomness is a funny thing. In the world of machine learning and artificial intelligence, randomness is used to avoid an algorithm "overfitting" to a problem. This is the algorithm's equivalent of slipping into comfortable tropes and ideas. Randomness pushes prediction algorithms outside of the grooves of the data they process to help them take a wider and likely more accurate view of the world around them. AI scientist, Janelle Shane, used a neural network, which itself includes random elements, to generate some awesome D&D spell names including hold mouse, barking sphere, wrathful hound, grove of plants, vicious markers, end wall, and gland growth.

We've talked about breaking conventional thought with random tables before but wanted to dive into the topic once again. 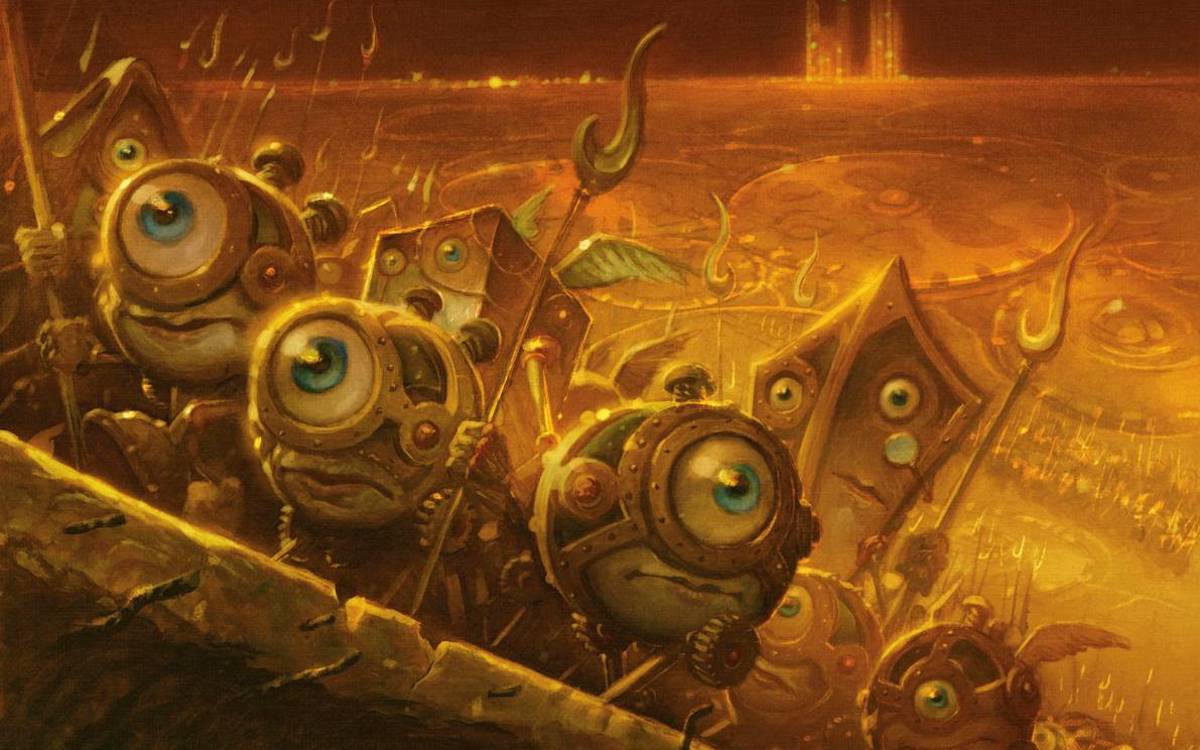 The fifth edition D&D Dungeon Master's Guide is full of random tables that we can read for inspiration or actually roll on to help us generate ideas for our game. Such tables have been included in Dungeon Master's Guides all the way back to the beginning of the game. Randomness, obviously, plays a huge part in D&D and yet in some cases, DMs are quick to dismiss it.

My personal favorite is the "framing events" table on page 79 which can help take any generic town or city scene and turn it into something dynamic and interesting.

We need not use random results without any modifications from our part. As M.T. Black does, we can look at what comes out of them and, if they don't make any sense, dismiss them.

Using random results to fuel our inspiration gives us a perfect opportunity to stretch our improvisation muscles, take what the dice give us, and make it part of the story.

In an excellent episode of Dragon Talk, Jeremy Crawford talked about how the randomness of Dungeons & Dragons is part of what makes the game fun for dungeon masters. Not knowing exactly what is going to happen is as much fun for the dungeon master as it is for the players, if we let it be. Jeremy brings up the idea of a dragon's breath recharging on a 5 or 6 on a roll of 1d6. If that breath weapon comes back, the whole encounter will run differently than if it does not.

The rolls of the dice inside of combat need be only one of the random elements that becomes part of the dungeon master's game. The random tables we find in our D&D books can likewise become part of the DM's game.

Improvisation may be the most important skill a DM can learn. The use of random tables to push us out of a groove; to prevent us from "overfitting" our own biases, cliches, and stereotypes into future stories; can help us improvise new, fantastic, and interesting scenes into our D&D games.

Randomness in the Tomb of Annihilation

Let's look at the published D&D adventure Tomb of Annihilation under the lens of how randomness can affect the story we share at the table. Chapter 2 of Tomb of Annihilation focuses on travel throughout the undead-infested jungles of Chult. Appendix B, beginning on page 193 of the adventure, includes twelve pages of random encounters we can run as our characters travel through the jungle.

Many DMs avoid running such encounters for a few reasons: they can bog down the game if we run too many of them, they can steer the characters away from the main story, or they just take too much time. None of these reasons are unreasonable. Before we toss them aside, however, we might consider what we gain by giving them a fair try.

Random encounters need not steer us away from the story. Instead, characters might learn valuable secrets or clues during an encounter. Meeting up with members of the Emerald Enclave in their journeys might give them more information about where they can learn more about the mysterious death curse.

We certainly don't want to bog the whole game down with random encounters and we might skip a few days on the journey throughout Chult since the distances between places can get pretty far. Still, the use of random encounters in Tomb of Annihilation can give us DMs a good opportunity to take what the tables give us and turn it into a major arc of the story.

Likewise, we can use the Weather, Monuments, and Weird Locales tables on pages 108 and 109 of the Dungeon Master's Guide to add even more flavor to the journey through Chult.

If we use all of these random tables together, we might come up with a pretty interesting encounter. The characters might find themselves facing nine ghouls and a ghast at an intact statue of Ubtao lost in the jungles for centuries. The encounter takes place during a particularly heavy rainstorm in the sweltering heat. The ghast has a triangle tattooed on its head that shows it to be a former follower of Ras Nsi. Perhaps the ghast might know something of the lost city of Omu!

Knowing how often to drop in such encounters is an important part of reading the table and ensuring we're keeping the progression of the story moving forward. Tomb of Annihilation itself states that we should use or skip such encounters only when it is fun for the group.

A Few Sources of Randomness

Beyond the random tables in D&D sourcebooks and adventures, there's a nearly infinite supply of random generators on the internet we can use to shake up our creativity and improvisation. Here are four I've created and one I love:

Ancient Monuments. This page offers randomly generated monuments we can drop into any scene to give it a bit of texture. The details of these monuments go well beyond that found in the DMG and let us generate thousands of unique objects to drop into our scenes.

Traps. This generator builds complicated traps with a mixture of both physical and magical effects. We need not make every trap as complicated as these. Many times a poisoned needle trap is the right one for the story. However, when we want to add something unique and menasing, overlapping a pair of traps with both physical and magical effects will definitely keep characters on their toes.

Relics. With 5e's more limited take on magic item rewards, single-use magic relics can give our characters interesting rewards without turning it into a Monty Hall campaign. This generator builds physical objects empowered with single-use magical effects to drop into treasure parsels as the characters discover them.

Names. Of all of the tools an improvisational DM needs, a good set of names is at the top of the list. Xanathar's Guide includes a dozens of lists of names for many races and cultures, both fantasy and from our own world. This is a fine list to have on hand. This random name generator won't likely work as well but might help out when one doesn't want to dig through a book for a random name.

Letting Go of Control and Shaking Up Our System

One of the hardest parts about dungeon mastering is the idea of letting go of the story. This is a big piece of the Lazy Dungeon Master and a piece that some DMs never really grasp or even want to grasp. That's ok, of course. If you're having fun, you're doing it right. Still, for some of us, letting go of the story has resulted in an entirely new game, one that really does unfold right in front of us while we're playing.

Adding more randomness to our game seems like it pushes us too far outside of the story we want to tell but, when cultivated correctly as M.T. Black does, we can use a mixture of randomness and our own creative improvisational eye to build entirely new situations that propel our stories forward in ways none of us would ever expect.