The fantastic hardback adventure, Tomb of Annihilation, includes a large throwback to the hex-crawl. In this mode of play, the characters make their way through the wilderness of Chult as they seek out ancient vaults and lost cities. Players roll for various checks to determine whether they can find their way through the forest, see threats as they come up, or avoid getting throat leeches (my new favorite disease next to super-tetanus). We also roll for a handful of random encounters as the days go by.

In today's article we're going to look at how DMs can make the most out of the exploration of Chult. This will focus primarily on chapter 2 of the adventure in which the characters dive deep into the sinister undead-infested jungles as they seek out the threat to the souls of the world. 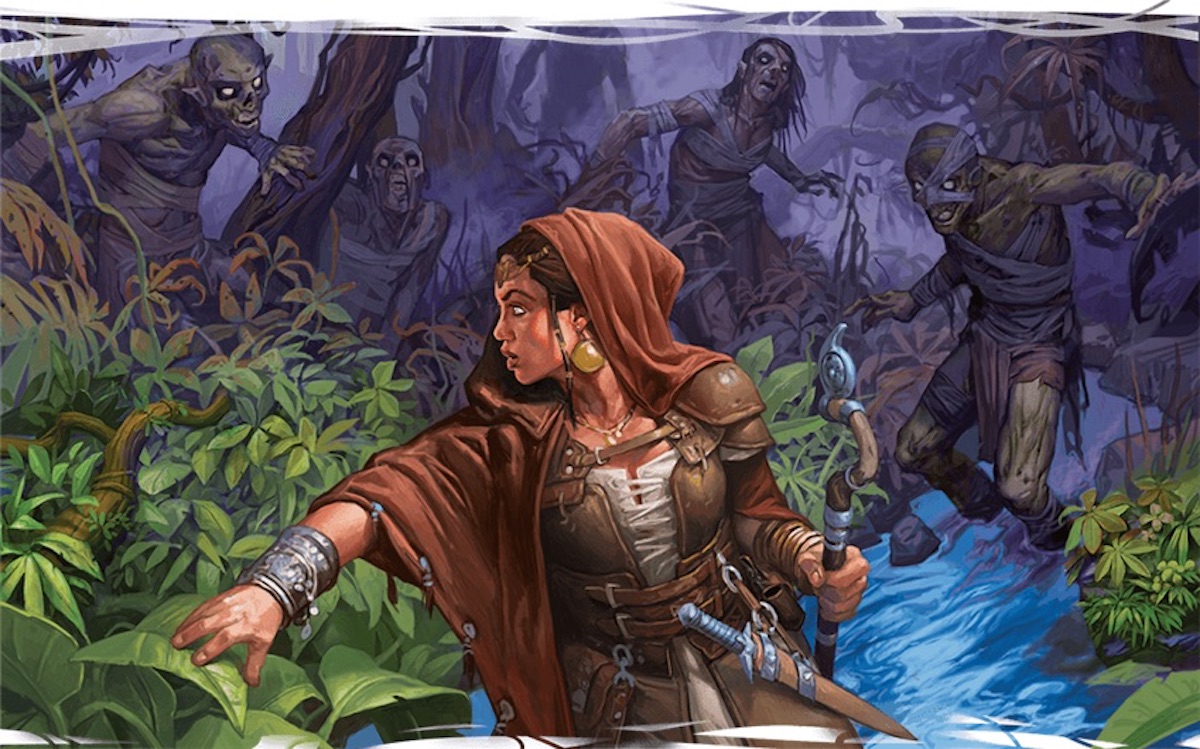 Give the Exploration System a Fair Shot

Tomb of Annihilation includes a rich system for handling the exploration of Chult and it's worth at least trying it out for a few sessions to see if it work for you and your group. You don't have to be a slave to it, however. Instead, you can tune the exploration system to suit the pacing you and your players enjoy. Early on though, before you look at this exploration system and judge whether it will work or not, give it an actual try and see what you think. You can always tune as you go.

Tomb of Annihilation itself doesn't have a system for determining weather each day but we can use the rules in the Dungeon Master's Guide to include rolling for weather while the characters travel through Chult. The adventure does mention that there is a 25% chance of a tropical storm on days of heavy rain. That's worth checking for as well. Weather adds some fun atmosphere to the events of the day.

Throw In Some Fantastic Monuments

Tie Random Encounters to the Story through Secrets

Many complain that the random encounters in Tomb of Annihilation (and other adventures) break away from the central story of the adventure and thus choose not to use them. Though these encounters are random, they need not steer away from the theme of the adventure. We can use our list of abstracted secrets and clues to help the characters learn about the history of Chult or the threat of the Soulmonger from these random encounters.

As we DMs learn to better improvise during our game we can look at what the random encounter chart has come up with and figure out how to tie that encounter to the story. Maybe it pushes the characters towards a discovery of the city of Omu. Maybe they see a vision of Acererak hanging over that horde of zombies. Part of our jobs as DMs is to make random encounters relevant and it's a fun part of the job.

There are other ways we can use random encounters to make things interesting during the exploration of Chult. First off, as the book says, we never need to go with what the dice show us if it's not that interesting. Feel free to re-roll or pick something nearby instead.

Third, we can mix up the results of two rolls instead of running just one encounter. We might do this if we roll multiple random encounters in a single day, say rolling a 4, 16, and 18 on our three daily random encounter checks. Instead of running them sequentially, we can mash the two together for something interesting. This might start off with an attack of Batari goblins who then call a zombie tyrannosaurus using a strange bone horn. It might be that same cyclops fighting a band of Emerald Enclave scouts. Maybe a pack of pterafolk use a nest of pteranodons as bait to lure the characters into a trap.

We need not be slaves to the random encounter chart. Instead we can use it as a way to inspire us to build interesting scenes in the jungles of Chult.

Chult is a big place and we're likely to get bored of running it one hex at a time. Instead, we can group days together and summarize them to our party. We might describe a ten-day journey in a tropical storm, soaked through and no cover, scraping by on what food and water they come across and watching in awe at the huge brontosauruses that munch on the tall trees. We might roll one random encounter per ten-day, again, perhaps, joining together a couple of encounters and a fantastic location to highlight an interesting event along the ten-day journey.

Finally, we can break away from the traveling system completely and use a 13th Age style montage system instead. In this system, we ask a player to describe an interesting challenge they face without offering a solution. Then, ask another player to describe how their character helped them get through the situation. We can do this two or three times to get all of the players involved, fill out the story of the journey, and learn what sorts of things interest the players. We can always use this montage system to skip over about ten hexes worth of travel and then return to the hex system when we want to.

Many DMs might look at the exploration and random encounter system in Tomb of Annihilation and feel bound by it. Without even trying it, a DM might feel like it is too mechanics-heavy and will end up being too much of a slog to bother with. Giving it a try, at least for a session or two, can let us know what it is really like and whether our players will actually enjoy it. We always know we can throw it out of it isn't working for us. Instead of throwing it out completely, however, we can use it as a toolkit to experiment with the descriptions and gameplay of travel in our RPGs. The above ideas are a few ways we might do so.

Above all, randomness aids in creativity and inspiration. It might not be immediately comfortable to trust that we will be able to tie random encounters to the main storyline of Tomb of Annihilation but we can do so if we abstract secrets and clues from the story and tie them to the random events that take place. Doing so creates a game that is just as much fun for us DMs as it is for the players.