In the Dungeons & Dragons adventure Out of the Abyss, the party has the potential of grouping with a number of NPCs as they all attempt to escape from their captors in the depths of the underdark. In Storm King's Thunder, the party can be accompanied by Harshnag, a powerful frost giant wielding an incredibly powerful magical axe. Finally, in Tomb of Annihilation, the characters have the potential of grouping with assassins, a Couatl, or an artifact-donning hero and his lizard companion wielding a holy avenger.

Some DMs may not have any problem handling these tag-along NPCs in a game. These NPCs find their place in a group and work their way into the story as it unfolds. Other DMs, myself included, have trouble with tag-along NPCs. Here's why.

First, tag-along NPCs make our lives harder as DMs. Running a whole world is already hard work, even for the lazy. Adding tag-along NPCs gives us a whole other set of variables to handle.

Tag-along NPCs also make combat take longer since there's another character in the mix. Sometimes we can hand this off to one of the players but not if the NPC has a secret identity. If you hand Dragonbait over to a player, I bet that sword is getting traded.

These tag-along NPCs also skew the balance of power in a group. Challenges that the party might have had a hard time with suddenly got easier. That extra NPC adds to the overall synergy to the party and that synergy is a huge power boost. If we want to challenge the characters, we're going to have to account for it.

Probably the worst offense of tag-along NPCs is that they draw the spotlight off of the characters. Our attention should be on the characters and how they interact with the world around them. Now we have this new character that doesn't belong to anyone but who also takes some of that spotlight away. This gets exacerbated if the NPC overshadows the characters in power, like Artus Cimber, Dragonbait, or Harshnag.

How do we handle it when tag-along NPCs become a burden to a game? Many DMs discussed the problem and potential solutions in a Twitter thread on the topic. The following includes ideas they discussed as well as some of my own. 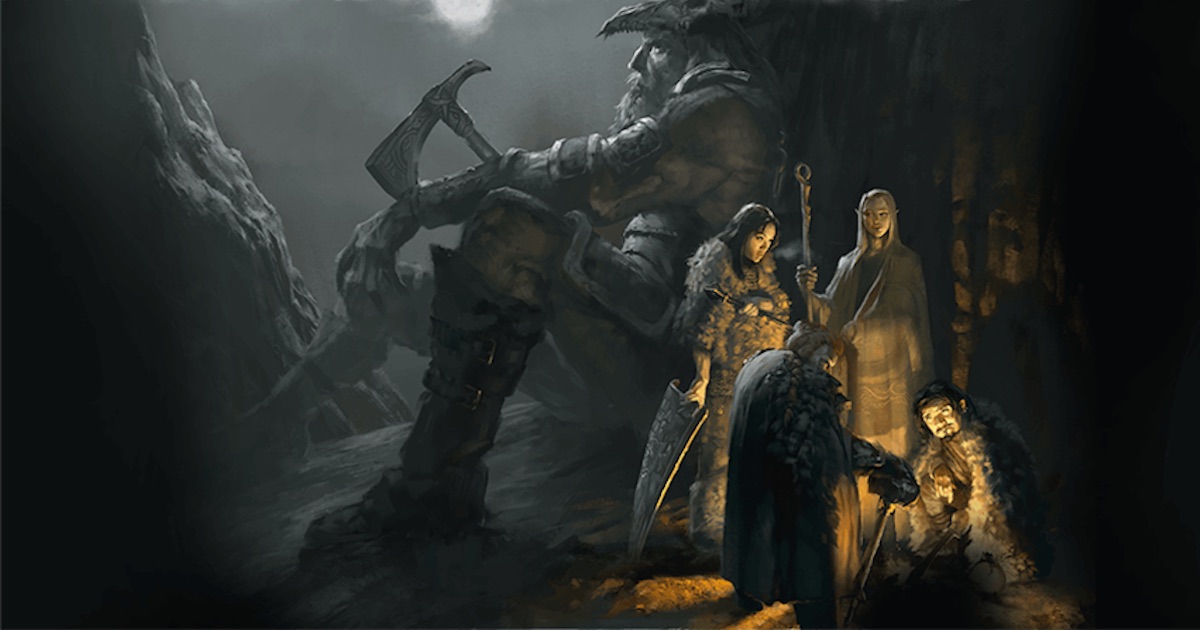 Don't Let them Tag Along in the First Place

If we know these tag-along NPCs might show up in our adventure, we can head them off before they actually join the characters. Maybe we just don't have them show up at all. What is their reason not to join the party? I hinted at Artus Cimber and Dragonbait in my Tomb of Annihilation game but never pulled the thread on them and never had them show up. Maybe I would have if they came up in a random roll of the dice but maybe I'd simply roll again. This is certainly likely after hearing how difficult these high-level NPCs can be when they join a game.

Have an Exit Strategy

If an NPC does join the party, it always helps to have an exit plan for the NPC. When will the NPC leave the group? What circumstances will lead to their departure? How do you steer things to ensure that circumstance actually takes place?

Harshnag in Storm King's Thunder had an exit plan; getting crushed under a million tons of ice in the Eye of the All Father. I don't know that Artus Ember and Dragonbait had much of an exit plan but they might come to either fear the characters or fear for the characters and head out during the night. The various NPCs in Out of the Abyss might eventually betray the characters or leave for other reasons. The guides in Tomb of Annihilation might get sick or might have another tangential agenda that leads them away from the party.

Keep your options open when considering how to get an NPC to leave the party and be ready to enact it if you find the NPC is overstaying their welcome.

What the NPCs do while their with the party can also make a huge difference in how things play out. If an NPC agrees up front to stay out of combat, that makes things easier. This works best if the NPC clearly isn't much of a combatant to begin with. It's harder when you see a lizard with a holy avenger sword who's standing back while you fight ancient crocodiles by yourself. There are few reasons why a combat-focused NPC wouldn't fight but, if there's a good reason within the context of the story, that can work out. Lets pretend Jarlaxle joined the group. He has a clear reason to disappear every time things get dangerous even though he's a hell of a combatant. It's a lot less likely Drizzt would stay out of a fight, though.

Instead, we have another way we can keep them out of the way.

One way we can have a combat-focused NPC in a party and still not causing much trouble is to make them part of the background. If the party is facing three ogres, maybe they're actually facing four and our combat-focused NPC is taking care of the fourth. We pull these two combatants out of the actual battle and simply describe the battle taking place between them in the narrative. No dice need be thrown, no damage needs be tallied; we just make it part of the scenery going on while the main battle takes place in the foreground.

This has limits, though. This style will likely get stale if you do it over and over. This problem points back to getting them out of the party as soon as you can so it doesn't get that stale.

In the case of an NPC who isn't seriously outclassing the rest of the party, let one of the players—maybe the player with the simplest character—run the NPC. You can give them a copy of the stat block, maybe taking a picture of it with their phone, and let them run the NPC on their same initiative. This is usually quick since monster stat blocks aren't terribly difficult.

If the NPC has a secret identity, say like Eku from Tomb of Annihilation secretly being a Couatl, you can instead give the player the stat block for the NPC they're pretending to be, say a spy or a veteran. These characters are likely to pull their punches anyway so as not to expose their true selves and that can be accounted for in the false statblock. It also keeps their power under control.

Be Aware of the Spotlight

Beyond adding extra power to the characters that might make potentially challenging situations trivial, NPCs in the party can have a tendency of pulling the spotlight away from the other characters. No one wants to watch DMs play with themselves. This can get tricky if the NPC is clearly the right person for a particular job, either because of what they know or the skills they happen to have. Why wouldn't the NPC who already knows the king be the one to negotiate for the party? This is something you'll want to noodle through before it starts to happen in your game. The spotlight should always be on the characters and tag-along NPCs should always be in the background. We might have to fudge the story a little bit to get them there but its important enough that it's worth bending the story to make it happen.

So far we've been talking about NPCs in the adventure who, through the purposes of the story, end up tagging along with the group. Sometimes, however, players will bring their own tag-along NPCs as part of their characters. Maybe they hired a hireling or maybe they summoned a pet. Maybe they have their own simulacrum walking around with them or some sort of intelligent pet. This is a slightly different situation because you can't simply route the NPC out of the group. If a character's NPC starts to hog too much of the spotlight, it might be worth having an out-of-game conversation with the player to determine how you can ensure their NPC isn't stealing the joy from the rest of the table. Mabye that shield guardian of theirs wanders off unexpectedly. Maybe that hireling quits. Maybe the simulacrum goes back to protect the characters' airship.

Other times these player-provided tag-along NPCs aren't that much of a problem. You can always account for them when determining the challenge of a fight if a challenge is what you seek by adding one or two monsters to balance them out. They also often make juicy targets.

One nice house rule you might incorporate is the rule of mutually-assured destruction for tag-along NPCs. This works well for delicate pets and familiars. If a character's NPC doesn't come out in a fight, you won't target them; even with area of effect spells. This helps them keep their delicate NPCs without worrying about them getting killed in every fireball that happens to target the party.

Many of these problems and potential solutions go away if, when you have the chance, you simply forgo having tag-along NPCs at all. If an adventure calls for an NPC to follow the party, consider whether it really needs to happen and, if it does, how they will exit out again. Be particularly careful with high power NPCs like Artus Cimber, Dragonbait, and Harshnag. They can completely unbalance an adventure if they stick around too much.

The easiest thing is to simply avoid such NPCs. That's what us lazy dungeon masters do.