The Deadly Shift of Tomb of Annihilation

Warning, this article contains spoilers for Tomb of Annihilation.

Tomb of Annihilation is a fantastic D&D adventure. It's an adventure of high fantasy in an interesting environment (the jungles of Chult). It has awesome locations to explore, cool NPCs to meet, a powerhouse villain, and the deadliest dungeon published in the fifth edition hardback D&D adventures to date. 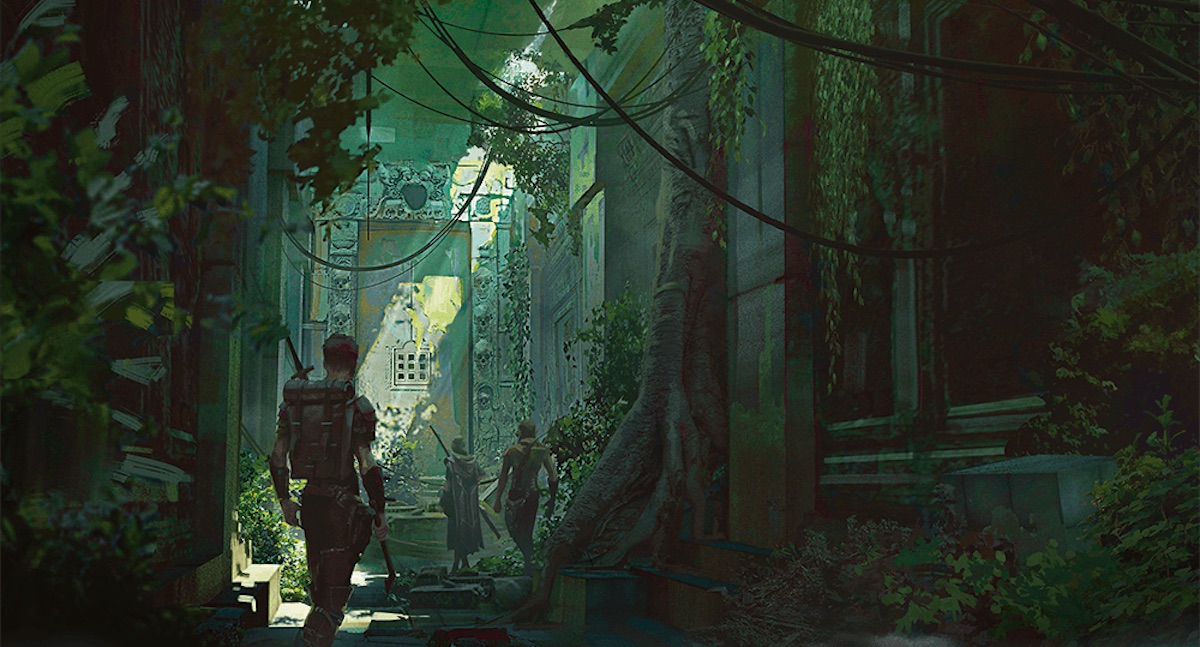 Tomb of Annihilation isn't without its problems. For the most part, these problems are manageable. Let's take a moment to review two of these problems.

First, as written, the death curse (the main driver of the adventure) has too much urgency tied to it. If this urgency isn't tweaked by the DM, the best course of action the characters can take is to run as fast as they can to the Tomb of the Nine Gods to stop the curse from quickly killing off oodles of rich and powerful people all over Faerun (hmmm). Luckily, this problem is easy to deal with. We discussed a few options for managing the death curse in the Urgency of the Death Curse by using it as an urgency dial instead of a fixed countdown timer. Simply forgo the hit point loss-per-day and describe the progression of the curse in a way that better fits the pacing of the game you want at the moment. If you want the characters to feel free to explore Chult, mention that the curse is little more than a concern at the moment. A rash, really. If you want them to laser in on Omu and the tomb beneath, explain how the powerful curse has escalated.

The second problem comes with the many NPCs that can join the characters throughout the adventure. In most cases, these NPCs are just fine but in a few they can either overshadow the characters with their raw power (I'm looking at you Artus Cimber and Dragonbait) or they can end up steering the characters too far away and waste a lot of valuable time on errands that have nothing to do with the plot. We've discussed this problem in the article Handling Tag-Along NPCs. The best solution here is to be careful when introducing these NPCs, ensuring you have an exit plan for them, or skip them all together.

Both of those problems are easily managed. There is a third problem, however, and one not so easily fixed. When the characters actually enter the Tomb of the Nine Gods, the whole atmosphere of the adventure changes. Instead of being a character-driven narrative story of exploration and intrigue, this adventure becomes a puzzle and deathtrap killfest. That's the problem we're going to talk about today.

The Atmospheric Shift of the Tomb of the Nine Gods

It surprises no one that this adventure's dungeon is actually deadly. We all knew it. It says so right in the beginning and if our players are paying attention at all, they'll know it's deadly too. But we say that a lot when it comes to challenges the characters face and most of the time they can pull out of the danger and survive anyway. If you're a soft DM like me, you can probably count on one hand the number of times characters have died in your D&D games. If you're harsher, actually killing characters often, and your players don't mind, maybe this isn't a problem for you.

For some of us though this shift is a big problem. Here at Sly Flourish we take a "character first" approach to our D&D games. It's the first step in the preparation checklist in Return of the Lazy Dungeon Master. We follow the guidelines of Dungeon World and become fans of the characters. These characters have histories. They have arcs. We love them and we love watching them go on adventures. We don't love it when they get in a black box, a friend hits a button, and they're turned into dust. Literally. Well, I didn't love it.

Death sometimes comes to characters in our character-driven games but often it's part of their character's arc. In this dungeon, though, their arcs can come crashing down with no warning at all. Again, maybe you're cool with this. Maybe so are your players. If that's the case, you need not change a thing.

For many of us, though, it's a big change in the style of the game and one we need to manage.

We might think that telling the players how deadly the dungeon is will be enough. We think they'll be ready for their characters to die. Sometimes this is the case. Sometimes they're even upset when they don't die. Often, however, the warning isn't enough. Hearing that a dungeon is deadly and actually watching your ninth level character get disintegrated are two very different things. Seeing a character actually die will feel very different to the player. Players might even say how much they love hard D&D adventures and love the threat of death—until it actually happens. At that point none of us know what to do.

When I ran Tomb of Annihilation and my groups got to the Tomb of the Nine Gods, I had everyone roll up secondary characters whose backgrounds had brought them to the tomb over the past century. Making them former members of the Knights of the Yellow Banner gave them a connection to other dead Banner members throughout the adventure.

Still, this wasn't enough. Even having secondary characters doesn't mean that shock and hurt will come when a beloved character gets cut in half by a giant grinning stone skull door.

Many players just aren't prepared for a character's death. I know I'm not.

Solution 1: Send in the B-Team

One way to potentially fix this problem in the adventure is to send in two separate teams of characters. The first characters aren't given the job to stop the death curse, their job is to open the Tomb of the Nine Gods. When the tomb is open, it's up to another group of dungeon delvers to go inside. The nearby wreck of the Star Goddess could be one way that a bunch of dungeon delvers have come to the tomb. The Red Wizards might also have their own group of dungeon delvers ready to go into the tomb. Even Ras Nsi might send his own Yuan-ti Pureblood characters in there as part of a team intending to stop the death curse.

These new dungeon delvers are the expendables. Our players know they might not last and that's ok. They've only had them since the beginning of the Tomb of the Nine Gods. If the die, they die.

Still, it can be hard to put aside characters the players love. Opening the tomb doesn't feel like the end of the adventure. They want to stay with their main character and send them into the tomb. From a story perspective, why should the characters who traveled all this way send some other poor saps into the death trap? If they're heroic at all, sacrifice is part of that heroism. That won't matter to the player when their character is crushed under a big door but it makes sense and it would be disappointing to do it any other way. Thus, switching to new characters at the tomb's door isn't a perfect solution.

One way to ensure your players don't get stuck on the decision to send in their main characters or switch to an alt is to wire in that choice from the beginning. Instead of giving the characters the quest to seek the source of the death curse and end it. The quest can be to seek the Tomb of Annihilation and open it. Those who send the characters into the jungle will know that the heroes who find the tomb aren't the same ones who will enter the tomb. Those who enter the tomb are better suited for tomb-delving, not jungle explorations. The main characters can become patrons of these tomb-delvers instead of the tomb delvers themselves.

If this switch is wired in from the beginning, players will feel less like they're abandoning their characters halfway through an adventure and understand that a character switch is built into the story. They'll know their other characters will be stepping out of the spotlight.

This too is not an ideal solution but it might be the best way to make the transition from a deep character-driven exploration adventure to a deathtrap dungeon.

Solution 3: Shaving Off the Sharp Edges

Here's a solution many DMs will hate: shave off the rough edges. Much of what makes the Tomb of the Nine Gods deadly are the situations where characters who drop to zero hit points are outright killed instead of simply rolling death saves and requiring a heal.

We can likely shave off the rough edges in a few different parts of the tomb to keep the characters alive, at least a little bit more alive, than they might be otherwise. We can still run a dangerous adventure where the players must make hard choices to stay alive without the direct threat of the one-button deaths that can be found in a lot of these chambers. The four elemental chambers are known to be quite deadly but they can be a little less so if we make it easier for players to navigate the puzzels as the characters flounder about.

Some of the more deadly rooms and traps to watch include:

Frankly, this is my recommended method. People just don't like to see their characters instantly killed in my games. Maybe some do, but I haven't seen them.

Solution 4: Run As Intended and Come What May

Finally, you can ignore all of this and run the adventure as it is. I've seen a lot of discussions from DMs who have run the Tomb of the Nine Gods and described the dramatic shift in lethality. They talked a lot about how it hurt peoples' enjoyment of the game. That was the case in the two groups I ran it for as well.

Tomb of Annihilation is close to the best D&D hardback adventure Wizards has released. This tonal shift from fantasy exploration to deathtrap hurts it. Otherwise, this is a nearly perfect adventure. The exploration is awesome. The setting is fantastic. The story is solid. The tomb, setting aside its lethality, is incredibly well designed. This adventure hits the exact level of focus I love in published adventures. I can deal with the warts regarding the urgency of the death curse and the issues bringing in problematic NPCs but the deadly shift of the adventure can kill a lot of fun after months of play if we're not careful. That's a hard problem to get past. Hopefully this article has given you some ideas how to deal with this shift so you and your players can get the most out of this otherwise fantastic adventure.