The Lost Temple of the Eshowdow

Note, this article contains spoilers for Tomb of Annihilation.

Nearly five thousand years ago many tribes followed the messengers of Ubtao to the lands of Chult. Nearly two thousand years ago a great civil war took place on Chult between the people known as the Eshowe and those of Mezro. The Eshowe called to a being of horrible power from the plane of shadow said to be a dark splinter of Ubtao himself. They brought it into the land and sent it to destroy Mezro. It soon turned on its summoners and scattered the Eshowe across the land. A champion of Mezro, a knight of Ubtao known as Ras Nsi, hunted down the remaining Eshowe and slew them all.

Yet remnants of this lost tribe, and their secret pact with the shadow giant Eshowdow, still exist buried under the jungles of Chult. This lost temple is one such remnant. 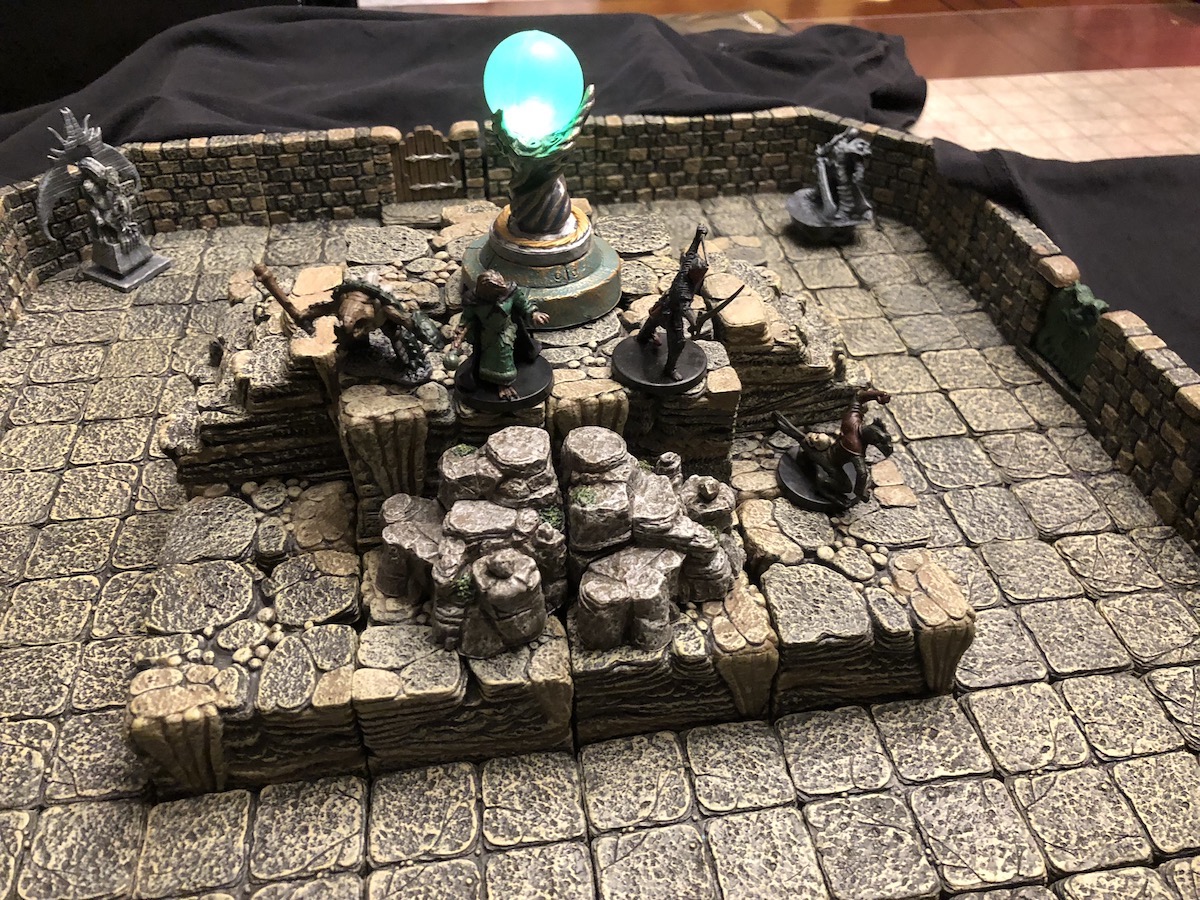 This article is different from others on this site. Recently I've been running Twitch streams and posting videos to Youtube that go into the details of the eight steps of Return of the Lazy Dungeon Master for game preparation.

The notes in this article isn't a fully playable adventure but you'll notice it has a style similar to Fantastic Adventures. These are the notes I wrote down and used to run a game in the middle of our Tomb of Annihilation campaign. The characters were fifth level at the time.

These notes mostly follow the Lazy Dungeon Master steps omitting first step of reviewing the characters since that will be different for your group than mine. The other steps: the strong start, potential scenes, secrets and clues, fantastic locations, potential NPCs, potential monsters, and treasure are all here.

For this session I also set up a nice Dwarven Forge setup which certainly added to the prep time but was a fun addition to the game.

This whole adventure follows a lost tribe of Chult known as the Eshowe. You can learn more about them and their originating source material from their Forgotten Realms Wiki page. The Eshowe are also mentioned in Chapter 4 of Tomb of Annihilation in the Valley of Lost Honor.

One special note, due to the Death Curse, any life draining caused by the spectres and wraiths in this adventure could seriously hinder or kill the characters. It can be a drag if a character enters the temple only to exit with 80% of their hit points gone. You might cut them a break with some sort of special ritual that restores their hit points here or let something like a Greater Restoration restore hit points. Or you can leave it as deadly as it is if that's the sort of danger your players like.

This adventure starts as the characters discover the head of a huge statue of an unknown god or champion. This statue is of the Eshowdow, a shadow giant summoned by the Chult tribe of the Eshowe who sent it against Mezro. It's strange angular features look not Chultan and nor do they represent any known deity. As they study the statue, one of the characters potentially falls down a sinkhole into a lost temple buried under the ground. Flying snakes spray out of one of the eyes of the statue while giant centipedes attack any who fall into the pit. 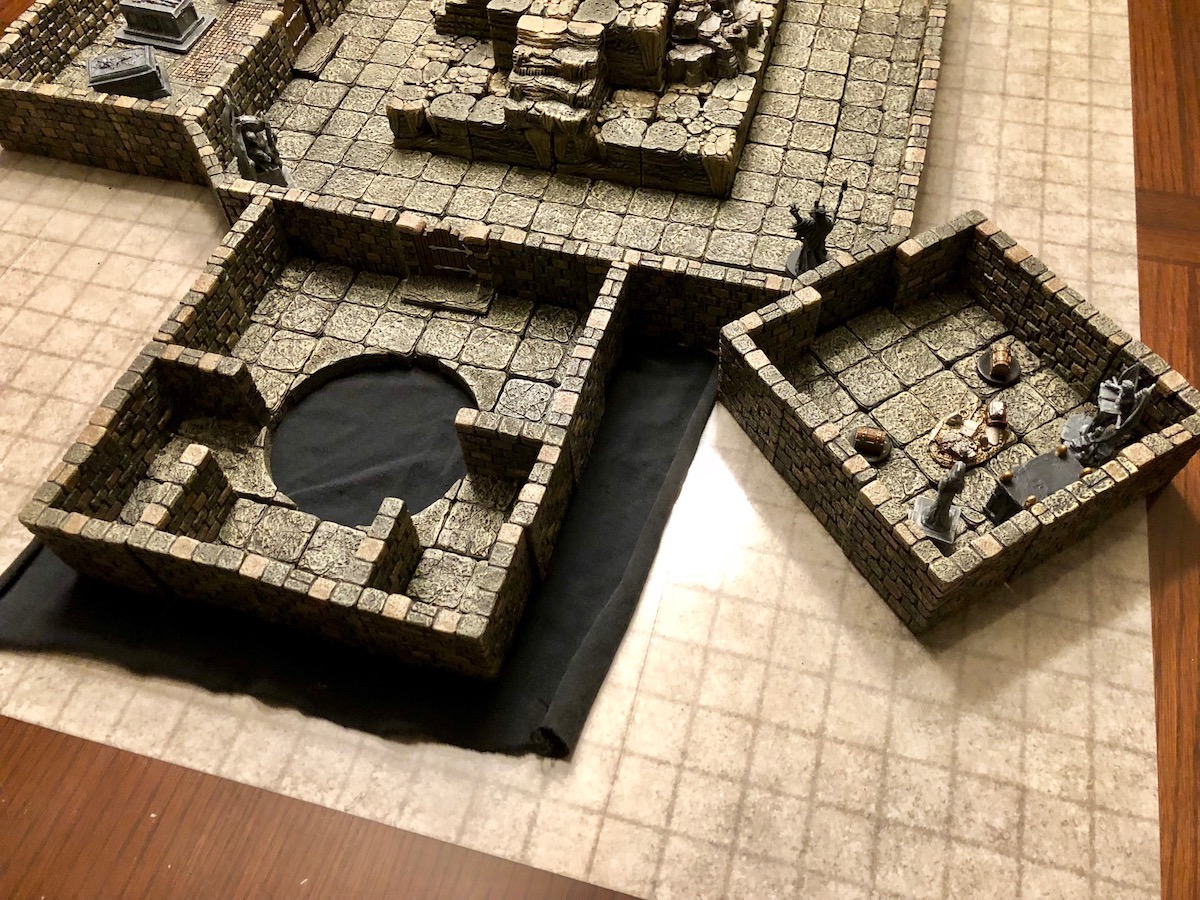 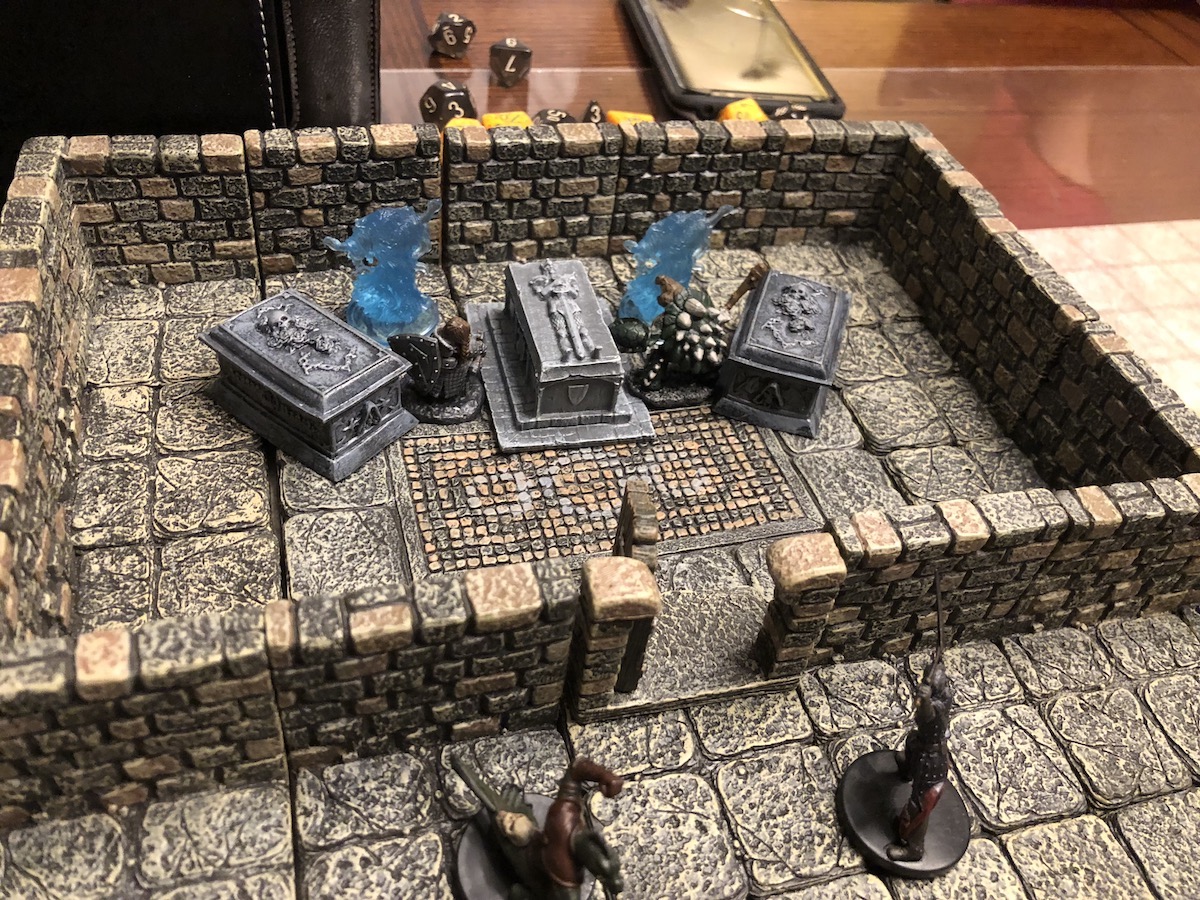 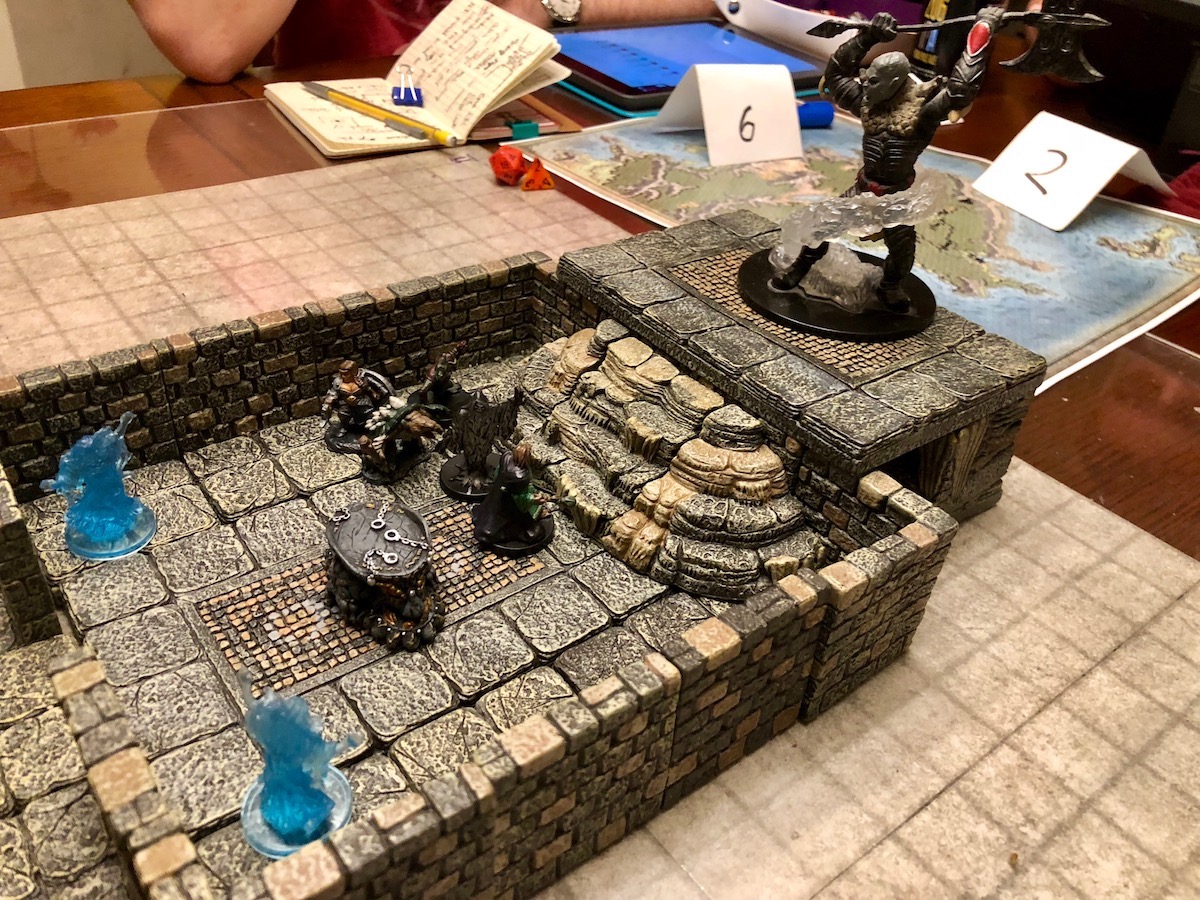 The Altar of Eshowdow: Huge statue of the shadow giant, obsidian altar, bones of sacrifices

The Pit: Huge pit in the center of the floor, hanging chains and cages holding dozens of skeletons, foul wind blowing in and out of the pit like the breath of the dead

Odrade Thellemaw: Undead warlock of the Eshowe. The last known "living" Eshowe. Still putters around the temple and spends years praying at the altar.

Three Claw: Tabaxi archaeologist who fell into the pit and broke his leg. Seeks the treasures and lore of the Eshowe.

Zane the Warlock King: A shadow remnant of the warlock king who summoned the Eshowdow and wishes him summoned again. 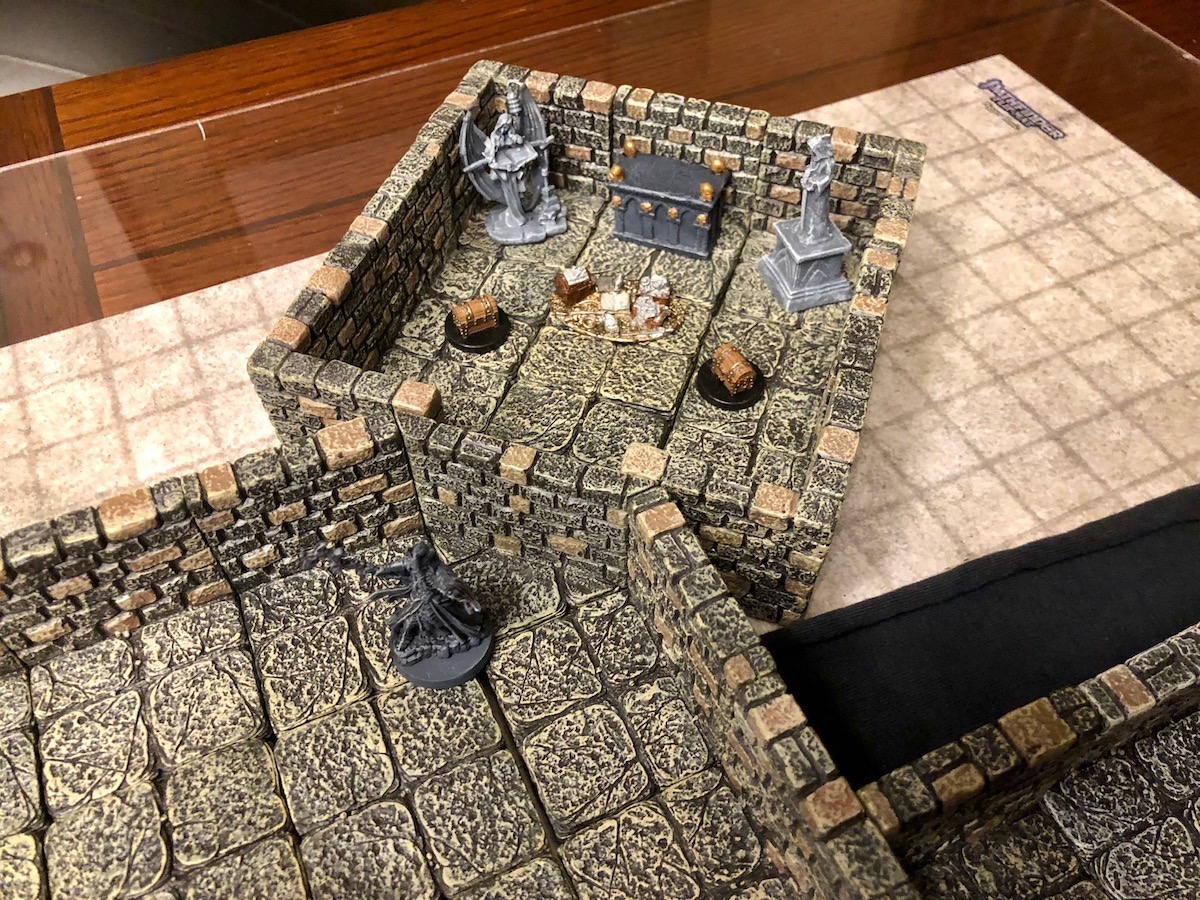 A Quick Outline for a Fun Session

Putting together the outline like this took about 30 minutes. Setting up the Dwarven Forge took another 30. I improvised a lot during the game including a deadly necrotic life-draining trap protecting the treasure vault that got one of the characters killed. And, in Chult, killed is killed.

Hopefully this outline gives you a few of your own ideas both for some fun Chult side-adventures as well as how to put together your own Lazy DM outline for the next adventure you plan to run.