Thoughts on the Finale of Tomb of Annihilation

Warning, this article contains spoilers for Tomb of Annihilation.

This is the final article of a number of articles discussing the Dungeons & Dragons hardback campaign adventure Tomb of Annihilation. Other articles include the following:

Today we're going to focus on the campaign's conclusion: the battle against the atropal and the arrival of Acererak.

Boss fights are different. Boss fights and campaign closers have a particular feel for them, one that requires some mechanical attention.

Maybe this isn't always true. Maybe, even in boss fights, we're actually better off just letting the story go how it goes just like we do with the rest of the game. Maybe I'm not wise enough to let go completely. I want to see a solid challenge. I want to watch the characters struggle but end victorious. I want a continual feeling of fear and hope rolling through the battle. I want something as powerful as the end of Vox Machina.

As it stands now, though, when it comes to boss fights and campaign closers, I tune things around the characters and their capabilities to keep a continual feeling of hope and fear.

The atropal encounter in Tomb of Annihilation can be swingy. The atropal a powerful creature with a lot of options—a lot of options to remember. It also has a huge vulnerability: radiant attacks. A paladin who smites the atropal can drop it very quickly. In some circumstances that may be just fine. They still have to deal with the Soul Monger itself and Acererak's arrival.

We can keep a handle on this dial if we want to. The average hit points of the atropal is 225 but its maximum hit points within its hit dice is 324. We can also ignore the radiant vulnerability if we think it's going to get nuked too quickly. Keeping a hand on the hit point dial is a good way to maintain a consistent challenge during a boss fight.

The atropal's necrotic aura is also worth remembering. The atropal floating around the room blocking healing and damaging characters by its mere presence is a big part of the fun. We can remember all of these special abilities if we grab a 3x5 card and write down the atropal's important actions and features so we don't forget it during the fight.

The atropal is also missing legendary resistances but we can always throw them back in if we think it will get knocked out of commission too easily. We can also turn its ability to summon a wraith into a bonus action so its dropping wraiths every round. When the atropal dies, so do the wraiths.

We might replace the atropal's wail with a maddening wail instead. I'm a huge fan of madness and gaining levels of exhaustion felt like it could be too much. This form of madness could be removed if, at the end of their turn, the character succeeds on their saving throw. Or, if they chose to, they can take 28 points of psychic damage at the beginning of their turn to break out of the maddening effect and get their full round of actions. This is a nice hard choice for players to make if they get stuck by this ability.

Most of the time we can focus its legendary actions on its ray of cold attack and increase the damage of this attack from 21 (6d6) to 28 (8d6).

The tentacle attacks from the soul monger are also important to remember and can do a lot of damage. Every turn the soul monger is attacked, it attacks with a tentacle. Thus, its attacks scale up nicely with the attacks of the characters. I gave the tentacle the ability to hit someone for damage and pick them up, threatening to drop them in the lava at the end of their next turn if they don't do something about it. This added a lot of interesting pressure on the characters to save one another before they're tossed into lava.

In this battle we can also tweak the pacing by considering the hit points of the soul monger itself and how many rods need to be broken to send it into the lava. If you have more than four characters, its probably fine to require two of the struts to break or even three if they're having an easy time of it. If they focus on the soul monger, we can increase its hit points as well.

Thus, we have a lot of dials we can turn in this combat to keep the pace nice and threatening without wiping out the characters in the last scene of a year-long campaign. Here are a few we might consider: 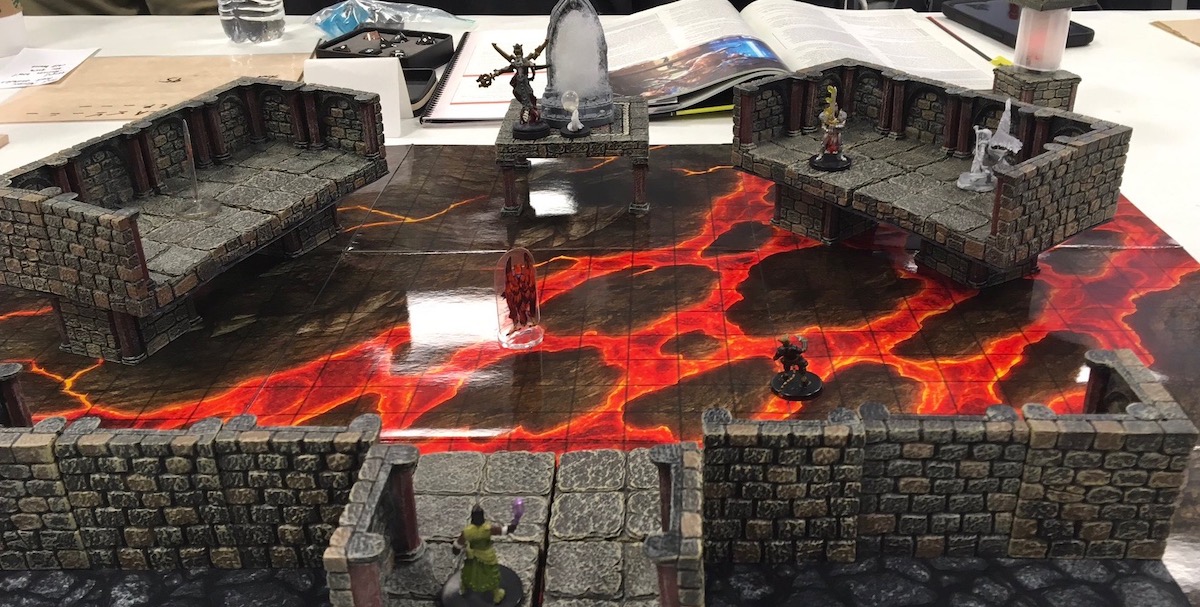 It's hard to offer meaningful advice for running Acererak at the end of this campaign. What happens in this battle and how you end up handling it will depend very much on each individual campaign.

I ran this encounter twice for two different groups and it went completely different each time. Neither time did they face off and try to fight the archlich directly. Smart thinking on their part.

In my versions of this encounter, Acererak becomes aware that his creation is under attack. I foreshadowed his coming arrival, describing how he was interrupted while carving a billion-year-old temple out of a dead rock of a planet with some of his lich apprentices and his sphere of annihilation. He arrived in my game when both the soul monger and the atropal were killed.

At that point, both the discussions and the disintegrations began.

In one group, we had an ongoing story thread in which our warlock character, Ogechi, was slowly turning into a lich himself. He pulled the black key in the maze room and gained a powerful necrotic spell attack as a result, along with an arm that looked like a lich.

When Acererak showed up, he wasn't so quick to kill Ogechi since this warlock proved to be a potential apprentice. All Ogechi had to do was sign an infernal contract scribed by one of Acererak's succubus lawyers. One of the other characters, the bard Tharmond, secretly charmed the succubus who forged Acererak's own signature on the contract, thus freeing Ogechi without Acererak knowing it. They then convinced the succubus to tell Acererak to return to his former work and they would take care of things here.

While this is going on, Acererak is hurling his sphere of annihilation (which has a terribly low DC and is easily avoided) at one of the other characters who is tossing phylacteries into the lava. He eventually lost the save and got disintegrated only to have the trickster god within him restore him only to be disintegrated AGAIN and so on. That was weird.

A couple of characters got a couple of hits on Acereak but eventually he left knowing he had a new apprentice with a tattoo key to open up the doors of the world of the night serpent.

So there was no real fight against Acererak.

My other game took a similar turn. In this campaign, Acererak discovered that one of the characters carried a dagger that acted as a key to open up the doors to the lair of the Night Serpent. He was willing to spare their insect lives if they handed over the dagger. They did, but, at the last second, threw it into his sphere of annihilation and ran for the portal. Thus they escaped into the jungle with an archlich's dark gaze upon them.

One way to handle this encounter is to ask yourself what the characters have that Acererak may want as much as he wanted the soul monger and the atropal. If you can throw this in earlier in the campaign, all the better.

Other than this, I have little good advice on running the encounter with Acererak. It's a strange fight to face a monster this powerful in the final scene of the game.

In both of my games I ended up skipping the final rooms of the lowest floor. I felt that, after the fight against the atropal and Acererak, it was time to be done. Your results may vary, of course.

One trick I've learned for ending a campaign, one that has served me very well, is asking the players to describe where their characters are one year after the end of the story. Some of the best stories I hear in the entire campaign come from these one-year-out montages. The bard, Tharmond, started a hit play in Waterdeep called the Tomb of Annihilation. The paladin who sold his soul to Grimfinger the Erinyes, built a temple to Torm on the edge of the Anauroch desert doing his best to serve his god before his soul belonged to a devil. The restored druid Warryn transformed himself into the new King of Feathers hunting undead in the jungles of Chult. The cursed warlock, Ogechi, went to the doors of the night serpent with Fenthasa, just as she predicted, and murdered her at the door, which she did not predict.

In my other game, Shelby, our tortle ranger returned home to his tribe on the coast of Chult. Tysabri returned to the graves of her parents. Truth and Sirzek returned to Sirzek's tribal home in the Spine of the World to restore honor to his tribe. Feski wrote a best-selling book on her adventures in Chult, nearly knocking Volo's Guide off the best seller's list. Fromash the lizardfolk death cleric built a new temple to a benevolent god of death in the city of Omu and helped the city return to its former glory.

If you get nothing else from this article, ask your players what happens to their characters one year after the end of the campaign. They almost always have ideas and they're almost always way more awesome than you can think up.

An Incredible and Strange Feeling

Over the past few years I've finished a handful of large campaigns. I finished a four-year campaign battling against Orcus the God of Death. I finished one-year campaigns for Hoard of the Dragon Queen, Rise of Tiamat, Princes of the Apocalypse, Out of the Abyss, two Curse of Strahd campaigns, two Storm King's Thunder campaigns. Now I've completed two Tomb of Annihilation campaigns. I am very lucky to have run them.